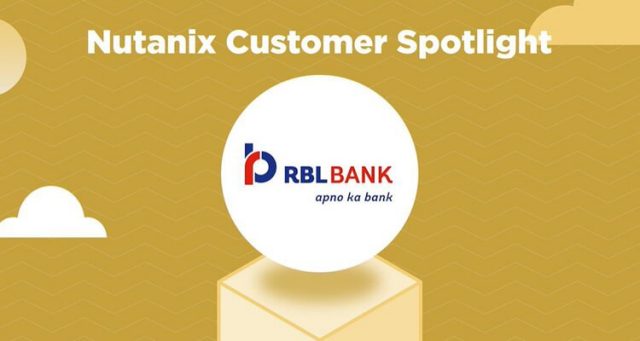 RBL Bank is a digital leader in India with a rapidly growing credit-card offering. It has created a fluid architecture based on Nutanix Enterprise Cloud that has turned IT into the enabler it needs to be in today’s financial services. With virtual desktops running on Nutanix, call-center staff are 35% more efficient, spending more time cross selling and upselling products. Applications and databases run 5x faster and database administration is 90% more efficient, helping the bank achieve a time to market for new services in just hours rather than days. Thanks to greater automation, scalability and reliability, the bank is taking advantage of business opportunities at speed and responding to customers’ needs at crucial times such as during the Covid-19 pandemic at pace.

We have gone beyond HCI with Nutanix, using its suite of products for application and database automation, micro-segmentation and much more for faster business results, while never losing the promise of simplicity and high performance.

India’s banking sector has seen seismic changes in the last 10 years through digital technologies, and it’s the banks that have moved fastest towards convenience banking that have seen the greatest success. RBL Bank, whose network of 392 branches and 1,221 correspondent branches across 28 Indian states, is one of those success stories. Today, it is rated India’s best bank in the mid-size bank segment. Yet, the bank’s current position as a digital leader is the result of a journey and the development of a fluid architecture that started several years ago, at a time when the IT infrastructure in place was the opposite of the business enabler it is today.

When IT fails to deliver on its potential

Back then, the existing three-tier infrastructure was nearing the end of its working life. The bank’s Citrix-based end-user computing (EUC) wasn’t performing well, and employees regularly saw their virtual desktops go down for up to a 5 minutes during office hours because of problems with the legacy infrastructures. EUC log-in times were averaging three minutes, while opening applications and accessing data was frustratingly slow. The performance of the MS SQL and Oracle databases was poor, reducing the number of customers that call-center staff could serve, in turn impacting the company’s ability to cross sell and upsell products.

The time when change become the priority

There was a wider problem beyond its EUC, however. Nimish Valia, Head of Center of Excellence, Strategic Technologies, RBL Bank, says, “The complexity of the enterprise infrastructure obstructed the speed of rolling out new services. The bank needed dedicated IT teams for each tier and when a problem occurred in one tier the knock-on effects for other tiers would necessitate a series of meetings, delaying operations to get back on track.”

Besides the intricacy of the hardware layer reducing IT agility, the software layer was also problematic. Application and database administrators (DBAs) were continually playing catch up in terms of completing their maintenance tasks and supporting new services requests. DBAs typically spent at least 70% of their time handling requests for user acceptance testing (UAT) environments from the business. Furthermore, the DBAs regularly took clones of the databases, with each clone taking up to one terabyte of storage—a significant add on to the company’s IT costs. Comments Valia, “They had little bandwidth to complete general tasks or work on strategic projects. The complexity and the weight of the workloads meant time-to-market for applications could be 2-4 days—which was becoming increasingly hard to justify when competitors were doing it increasingly faster.”

The situation needed to change, and RBL Bank launched an IT transformation program with agile, always awake, and automated IT as the key drivers. It called the program “Fluid Infra & Feel of Infinite at Finite Cost”—capturing the place where IT services needed to get to for the organization’s continued success.

The first step on the journey to the place where the bank wanted to be was working with Nutanix to fix the EUC. In 2018, the organization implemented a 14-node Nutanix Enterprise Cloud cluster to support approximately 5,000-plus VDI users. The impact of Nutanix on the performance of its EUC was transformative from an end-user and IT perspective, eliminating outages and simplifying administration. In fact, it was at this point that the bank gained a real insight into the possibilities of a hyperconverged infrastructure (HCI).

A broader conversation with Nutanix begins

Continued discussions within the bank led to the Nutanix HCI being chosen to resolve the wider IT issues that tied up the IT team in management complexity and reduced the organization’s agility. RBL Bank selected the Nutanix Enterprise Cloud to deliver a database as a service (DBaaS) solution that would deliver the application-level transformation needed for speed and agility.

To the existing 14-node Nutanix cluster, the bank added eight nodes to support the DBaaS solution—enabling the bank to reduce its hardware footprint by 40% in the process and saving huge significant sums in hardware costs annually. In the process, the bank migrated support to Nutanix for banking systems and critical MS SQL databases, along with SAS analytics, other business applications, and document management systems.

With Nutanix Acropolis Hypervisor (AHV), the bank gained intelligent security, high levels of operational automation, and one-click simplicity. Plus, with Nutanix Prism Central, it could take advantage of single-pane management of the full stack.

Building on this core of management solutions, RBL Bank added Nutanix Flow to simplify network security and Nutanix Calm for application management and orchestration. The bank also added Nutanix Era to deliver DBaas solution in order to create copies of multi-terabyte databases automatically and refresh them every day with consistent timing and performance.

Even before the impact of the DBaaS solution was felt, bank operations were significantly improved through our EUC migration to Nutanix. “Straightaway, there was feedback from across the organization. Employees were asking, Nimish what have you done? We’re not seeing any downtime these days,” remembers Valia.

Says Valia, “Call-center applications and databases now run six times faster—with login times reduced from 180 seconds to 30 seconds—enabling staff to deliver a better level of service and attend to more customers.” The call centers’ 5,000-plus staff could spend more than 160 hours extra each day working with customers, cross selling and upselling services. When bank staff ran the numbers, it had a 35% improvement in contact center workforce efficiency.

Over time, the improvements led to a 99% reduction in service tickets around EUC, but more importantly, the transformation helped RBL Bank accelerate growth in its credit-card business and reduced the cost of customer acquisition by half. Since 2018 and the migration of the HCI to Nutanix, the bank has been able to double the number of call agents enhancing EUC performance and have witnessed a new milestone record of 2.5 million sales of credit cards.

RBL Bank has simplified database management with its Nutanix HCI platform for databases and Nutanix Era—reducing DBA workloads and enabling the organization to respond faster to new opportunities.

“Using Nutanix Era, we estimate to achieve savings of up to 90TB. Our DBAs can provision, manage, refresh, and restore the bank’s many databases in a single click. They are no longer playing catch up with UAT requests while still trying to keep on top of their workloads. Time to provision a new database has been cut by 90% and we can create zero-byte clones in just 4 hours. Our DBAs now spend just 30% for their time on UATs so they can focus more on strategic work,” said Valia. “More importantly, with compute and storage resources, and database copies available in an instant, time-to-market for new services has dropped from 2-4 days to 4-6 hours,” he said.

Such flexibility helped the bank take advantage of a business opportunity that came in overnight. Traditionally, RBL Bank handled 50% of the financial transactions of a leading online gaming company in India. The other 50% has handled by another bank, but when that bank went into administration, RBL Bank had to step up—and support 100% of the gaming company’s business. The bank needed to clone its database to support the traffic increase. With the old three-tier infrastructure, this would have taken around four days, but using Nutanix and Nutanix Era, the work was done in just four hours.

Valia also highlighted the strength of Nutanix HCI in handling heavy workloads, “scalability of the Nutanix HCI meant the system could go from 15,000 transactions per day to 65,000-70,000 transactions per day without any problems or cost of adding new hardware,” he said. The exercise broke the myth that expensive proprietary systems are needed for these kinds of critical workloads. RBL Bank supported the entire 50% increase on just four additional Intel processor cores.

An efficient, non-complicated IT world

No IT project has been this transformative, and the situation Valia finds himself in is unprecedented. He explains, “I’ve never had it before where one administrator can do everything—database set up with Nutanix Era, virtual machine set up with Nutanix Calm, and platform management using Nutanix Prism. I had to figure out how to re-allocate the staff from our infrastructure teams. It was a great issue to have.”

Indeed, using the Nutanix suite of products, the bank has completely stripped out the complexity from IT administration. “We are in the position where we can think and strategically plan how we’re going to spend our resources,” says Valia. “We’re no longer putting out fires—we’re focused on the question, what can we do that will deliver most value to the business?”

In a Covid-19 world where business agility is more important than ever, the bank not only has the tools to maintain its business operations when employee movements are restricted but can quickly launch the services it knows customers require. The bank benefits from the remote management capabilities of Nutanix and the ease of ramping up EUC if employees need to work from home. Plus, the bank has seen an increase of 75% in the number of calls to the call center during the Covid-19 emergency from customers seeking information. To prevent call-center being overwhelmed and customers waiting for long periods, the IT team was able to quickly scale the call-center application to support the increased workloads.

The bank’s digital transformation journey is continuing, with a proof of concept for Nutanix Beam underway. Using the solution, the bank will analyze its current cloud spend on AWS and Azure and optimize security. Already Nutanix Beam is highlighting potential savings of 20-27% on current cloud expenditure, establishing a strong business case for its deployment. It’s these kinds of savings that will enable the bank to invest more resources in key areas such as software development, which in turn will reconfirm IT’s new position across the organization as a key business enabler. The bank is also in the process of deploying Infosys Finacle DA on the Nutanix Karbon container platform to trigger its containerized application journey. In addition, there are plans to leverage Nutanix clusters on AWS for creating a truly hybrid cloud environment to deliver on the agile, always awake, and automated concepts behind its “Fluid Infra & Feel of Infinite at Finite Cost” program.