The infrastructure for Nutanix Disaster Recovery-as-a-Service (DRaaS) supports a tenant cluster and a production virtual private cloud (VPC) for each customer. Customers generally have production VMs running in their on-premises cluster, which is connected to the DRaaS VPC using an IPsec tunnel. This is used by the DRaaS workflow to replicate on-premises production data.

In this type of disaster recovery situation, customers can choose which critical VMs are replicated to DRaaS. But in those cases, on-premises VMs cannot communicate with VMs in DRaaS.

Why this is the case

The reason behind this is that Nutanix DRaaS advertises the subnet 192.168.10.0/24 over eBGP to on-premises while the on-premises VPN gateway will have already learned that route locally. Because local routes have shorter administrative distances, no user VMs from on-premises can communicate with DRaaS. This is a Layer 3 routing conflict that can be solved by using the Layer 2 stretch feature.

This blog will cover:

What is Layer 2 stretch?

Layer 2 stretch enables VXLAN over IPsec on Nutanix VPN gateways to stretch an on-premises subnet to DRaaS. VXLAN technology is a Layer 2 overlay scheme over a Layer 3 network. VXLAN uses MAC address-in-user datagram protocol (MAC-in-UDP) encapsulation to extend Layer 2 segments across a Layer 3 segment. This basically means the Layer 2 packet gets a VXLAN header applied, then the frame is encapsulated into a UDP IP packet and sent over a Layer 3 network.

The DRaaS VPN gateway uses Virtual Tunnel Interfaces (VTI) to establish eBGP over IPsec for on-premises cluster connectivity. As a result, the VTI interface serves as a transport link for VXLAN communication so that the VXLAN traffic can be encrypted and tunneled through IPsec.

Nutanix recommends using Layer 3 routing over the Layer 2 stretch implementation. If preserving IP addresses for universal virtual machines (UVMs) is not a requirement, it is a best practice to use Layer 3 routing. In that case, an on-premises network (e.g., 192.168.10.0/24) is failed over to DRaaS with a different subnet (e.g., 172.16.30.0/24), which eliminates routing conflicts.

Journey of a VXLAN packet in a Nutanix DRaaS environment

To explain how a VXLAN packet traverses a stretched network, this blog will cover a few VXLAN terminologies, the MTU and TCP-MSS settings, and an ARP resolution scenario when VM details are not learned by the VPN gateway. Here is the setup after the feature is enabled. 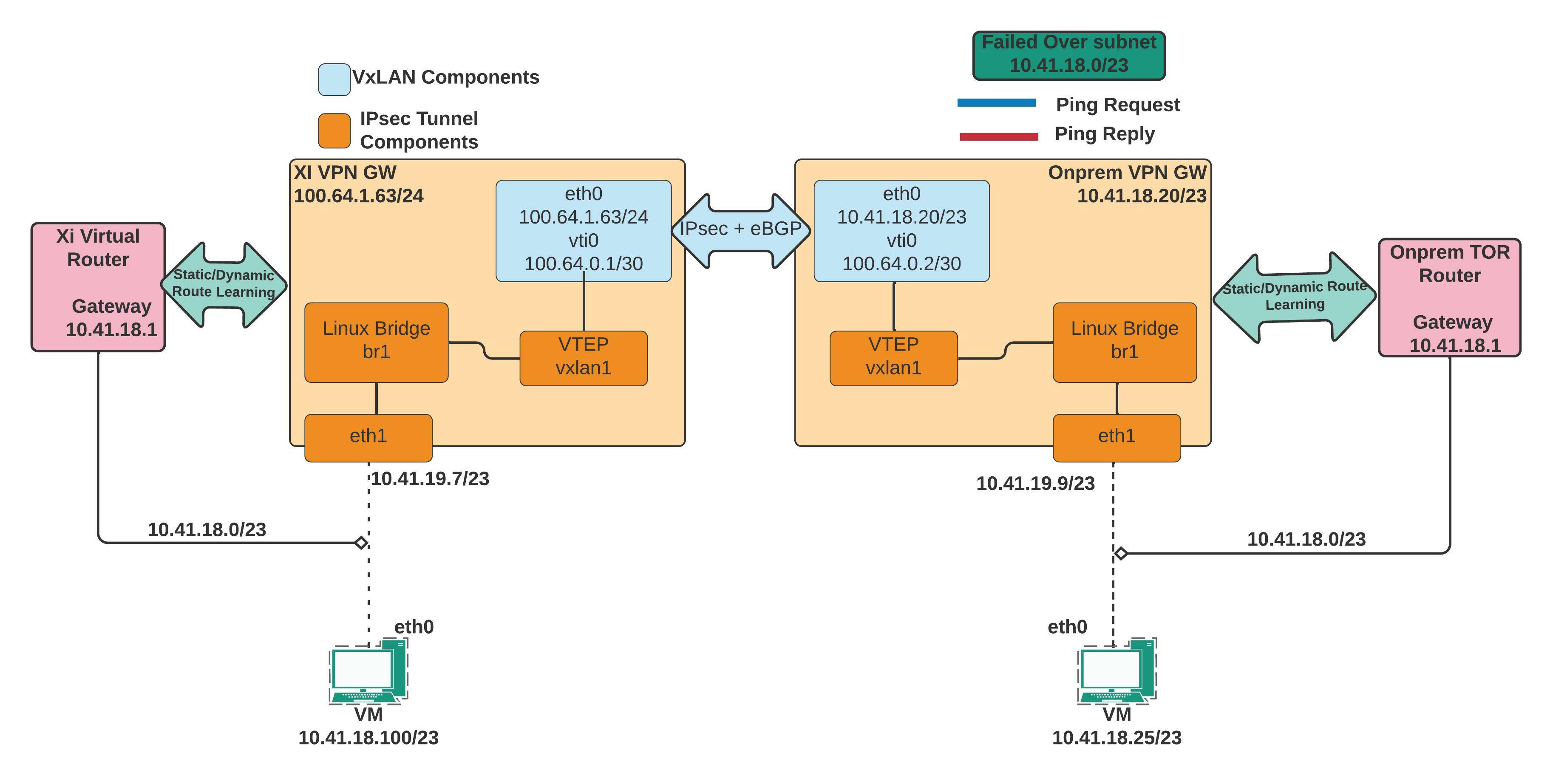 VXLAN components and their importance

To illustrate the journey, this diagram shows the path and possible encapsulation of a VXLAN packet: 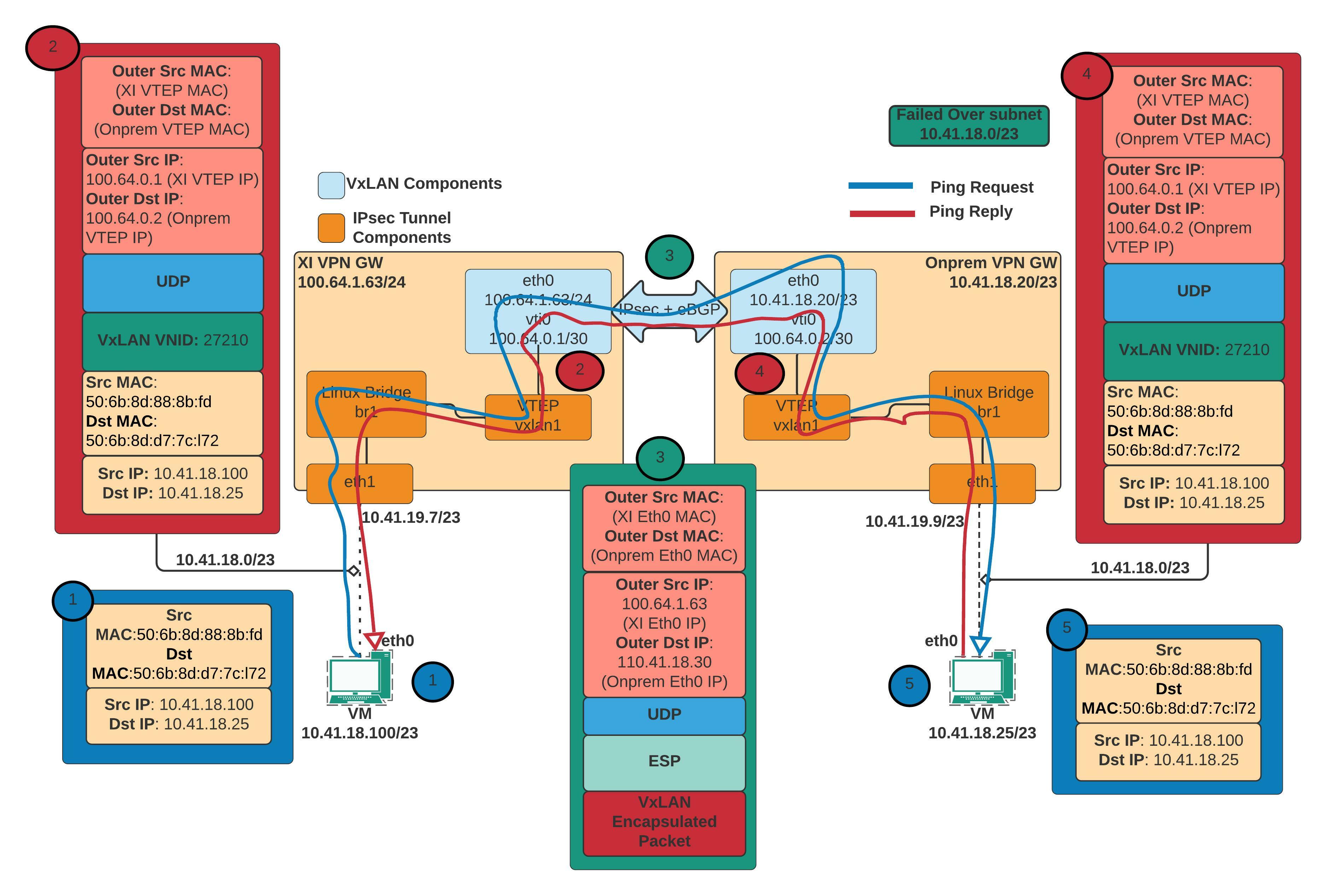 After all levels of encapsulation, the packets flowing through the IPsec tunnel between the NX gateway appliances will generally look like this:

When the VM from either side sends a packet with a size of 1,266 bytes, the packet after VXLAN and IPsec encapsulation would look like:

This scenario assumes that DRaaS has the same subnet already created. Layer 2 stretch can be leveraged in a scenario where the on-premises controller VM (CVM) subnet needs to be extended to DRaaS. However, to stretch the subnet in this case, a few routes must be added. 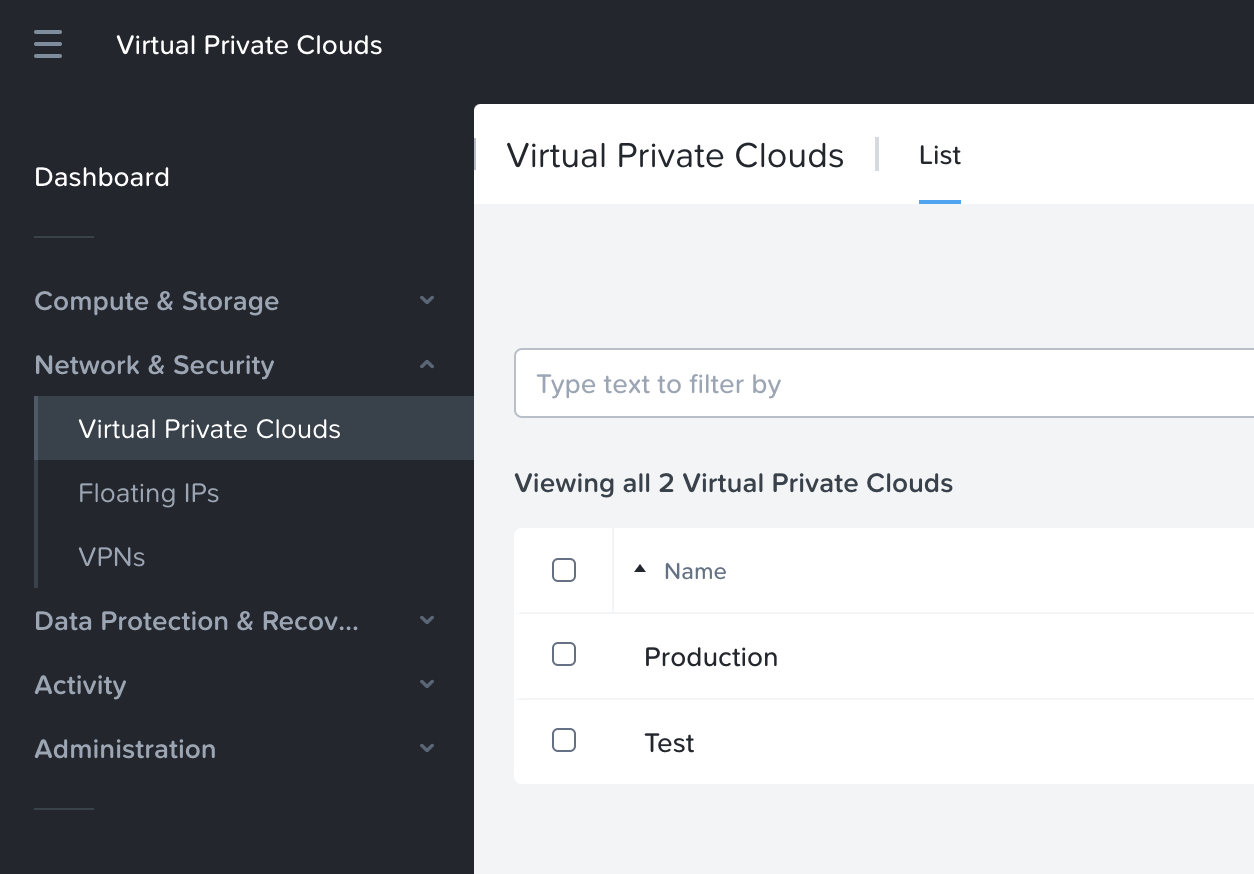 Defining gateways of an extended subnet on Nutanix DRaaS

In case of a planned failover scenario, the failed-over VMs will honor the static route to reach the destination subnet. Reachability to other DRaaS UVMs in other subnets will occur without issue.