This is the third blog in my series on the You Decide campaign. I invited Steve Kaplan, AKA “ROI Dude,” to co-blog with me. For those of you who don’t know Steve, he’s a bit of an expert in TCO, ROI, datacenters and legacy virtualization competitors.

In the You Decide campaign, we identify three major burdens customers face: operational, personal and financial. This blog focuses on the financial taxation that comes with legacy approaches to the datacenter.

When VMware came to market in 2001, network connectivity was 100Mb, and Intel processors only had one core and ran at 1.2Ghz. Memory was sold in 128MB DIMMs running at 133 MHz for $50 each. Flash was still a niche product.

The lack of hardware performance required dedicated hardware and administrators to accomplish virtualization tasks. For example, the first VMware vCenter user manual specified that to run vMotion, “The hosts must share a storage area network.”

But centralized storage was never a good fit for a virtualized datacenter. A SAN moves the flash and disk away from the compute (where they can be most effective) and sticks them in proprietary arrays at the end of the storage network where they’re subject to performance degradation due to network hops and latency. Even all flash arrays still must communicate with the servers across a separate storage network.

SANs are also expensive, don’t scale well, and require additional hardware and effort for resiliency. And they are complex, requiring storage specialists to deploy, manage and upgrade them. The book, Storage Design and Implementation in vSphere 6, is 1,242 pages! In contrast, Nutanix’s equivalent to this weighty tome is a 12-page tech note.

Google and the other leading cloud providers did not run storage arrays for their primary hosting business. They capitalized on exponential improvements in hardware performance to transform storage into software. They run a distributed file system that aggregates storage across millions of commodity servers.

Nutanix did something similar – but for the datacenter. Hyperconverged infrastructure (HCI) runs storage as an application on commodity virtualization hosts. Gone are the arrays, the storage networks, the separate management tiers, the huge administration costs, the difficulty in scaling, and the need to ever deal with a forklift upgrade.

Six years ago, the leading storage giants who dominated the datacenter all scoffed at the notion of HCI. Today all of them offer one or more HCI solutions. The last hold-out, Pure Storage, just caved and announced on April 2nd that it has purchased an HCI manufacturer.

It is not just the clunky and complex SAN infrastructure that is a vestige of VMware’s early days. The whole idea of virtualization as a product resulted from the same hardware limitations of the times. In the cloud era, virtualization is no longer a product – it is a feature of the cloud stack. In other words, it is invisible.

None of the leading cloud providers rely on commercial proprietary hypervisors at all. Most use a customized version of the open source hypervisor, KVM. An administrator using AWS, Google Cloud, or Alibaba, for example, does not need a virtualization specialty.

Nutanix AHV changes the core building block of the virtualized datacenter from hypervisor to application. It liberates virtualization from the domain of specialists – making it simple and easily manageable by anyone from DevOps teams to DBAs.

Traditional virtualization administrators transition to hybrid cloud administrators. Rather than spending their time creating host profiles or configuring vCenter redundancy, they move up the application stack. They can provide real value to their organizations through capabilities such as analytics, big data, and DevOps.

The Customer Success Finance team at Nutanix not long ago did a TCO analysis for a large organization shown below. The analysis projects a 5-year $12.5M decrease in TCO, or 52%, by moving from legacy 3-tier infrastructure to Nutanix enterprise cloud. An August 2017 IDC study showed that customers moving from 3-tier to Nutanix, on average, reduce TCO by 60%. However, eliminating this customer’s legacy virtualization software and support brings the TCO reduction up to $14M or 58% − and this doesn’t include additional savings in deployment, administration and security hardening.

“You are $4.4M out of compliance. But buy our virtual SAN product as part of your ELA renewal, and we’ll make it go away.”

A large virtualization manufacturer delivered this message to one of our customers following an ELA audit a few months ago. This bullying exploits the inevitable shock from an unexpected large cost. It is something customers shouldn’t have to experience, especially now that virtualization has evolved from product to feature.

Does it work? Perhaps…but at what cost? While some companies may give into true-up ultimatums, others will choose freedom. The freedom to accelerate an organization-wide shift to a business partner who acts like, well – a partner. Freedom from lock in and true-up surprises. 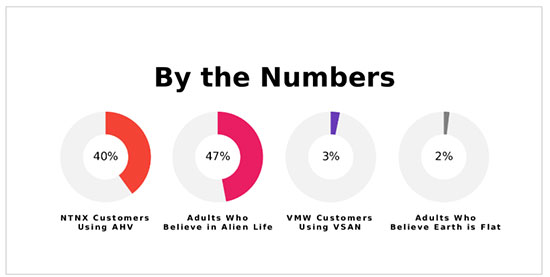 Steve just finished a book called The ROI Story: A Guide for IT Leaders(available at Nutanix .Next in Anaheim May 6). The book discusses why it is essential to crunch the numbers when evaluating disruptive infrastructure such as HCI or public cloud. It shows how a CIO can weave financial analysis results into a compelling story that both achieves budget approval and galvanizes people into action.

© 2019 Nutanix, Inc. All rights reserved. Nutanix, the Nutanix logo and the other Nutanix products and features mentioned herein are registered trademarks or trademarks of Nutanix, Inc. in the United States and other countries. All other brand names mentioned herein are for identification purposes only and may be the trademarks of their respective holder(s). This blog contains links to external websites that are not part of Nutanix.com. Nutanix does not control these sites and disclaims all responsibility for the content or accuracy of any external site. Our decision to link to an external site should not be considered an endorsement of any content on such a site.RESOURCESEnterprise Cloud For DummiesTake A Test DriveNutanix A Leader In New Gartner MQ For HCIPrevious PostNext Post