Today, AMD announced the launch of its latest EPYC™ 9004 Series processors, an important milestone in the AMD and Nutanix technology collaboration. Both AMD and Nutanix are focused on customer obsession and innovation;  Nutanix is a 5 times HCI leader in Gartner’s magic quadrant with an NPS score of 90+ and AMD is a technology leader in high performance computing and holds 250+ world records for AMD EPYC Processors across nearly every type of application and workload.

The AMD EPYC 9004 Series of processors builds on AMD’s mission to accelerate next-generation computing experiences, as they leverage the high-performance “Zen 4” architecture with up to 96 cores per socket, and with energy efficiency thanks to 5 nm process technology. The new EPYC 9004 Series introduces support for high performance DDR5 DIMMs, fast PCIe® Gen 5 I/O, and support for 12 memory channels, delivering the resources needed for memory hungry AI, ML, HPC, and large in-memory computations. These processors are built with security-first principles by offering AMD Infinity Guard technology with workload protections at both the software and system level.

Our joint solutions maximize the value we bring to our customers and tap into the hardware and software innovations offered by Nutanix and AMD EPYC processors. These solutions overcome the limitations of compute-storage-network, 3-tier infrastructure and provide cloud-like experience across diverse workloads on premises, in the cloud, or at the edge. Raghu Nambiar, CVP of Datacenter Ecosystems & Application Engineering, shares his thoughts on how to enable our common efforts in this blog.

Our collaboration dates back to 2018 with early R&D exploration efforts with AMD EPYC 7001 Series. It has since evolved into a broad portfolio we offer today with AMD EPYC 7002 and EPYC 7003 series spanning 3-way HPE, Dell and Lenovo collaborations. Our portfolio covers the major Nutanix focused solutions with a wide variety of component choices.

The AMD EPYC family provides exceptional value and performance, optimizing along all the major vectors - core-count, clock-frequency and power envelope. With up to 96 cores per socket, 4th generation AMD EPYC processors are a popular choice for end-user computing (VDI) and container runtimes. Customers benefit from maximizing the desktop or container density per server, thus helping lower the total cost of ownership. At the other extreme are database applications that prefer the highest clock speeds. AMD also delivers lower core count, higher frequency CPUs that are ideal for these use cases. Finally, with AMD Infinity Guard, security features are built into the hardware so it doesn't take away from the system resources. Nutanix solutions take advantage of Secure Memory Encryption (SME) and Secure Encrypted Virtualization (SEV) to offer elements of confidential computing without having to trade performance. 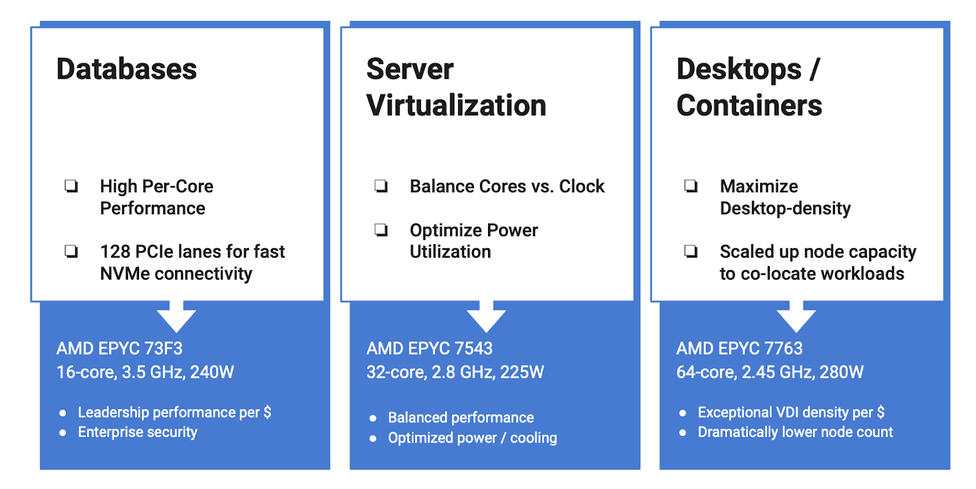 To help our customers make the right platform decision, we have integrated AMD EPYC processor based solutions into our workload sizing and quoting tools. We have jointly published database and EUC benchmarks, as well as offer hosted proof of concept options.

With the launch of AMD EPYC 9004 Series processors, we are very excited about the future possibilities and the portfolio expansion across our OEM partners over the next few quarters… stay tuned!