Nutanix reaches a new milestone in HCI history with AOS 5.18

The AOS 5.18 release marks an advance in the history of hyperconverged infrastructure, with new features that capitalize on an innovative distributed architecture that enables HCI customers to elevate application performance while further simplifying and automating IT operations.

The backbone of AOS is its web-scale architecture that not only prioritizes performance, resiliency, and scalability, it also enables continued innovation in these areas. Fine-grained metadata is the foundation of a scale-out architecture that enables both uncompromising resiliency and flexible yet predictable scaling. Fine-grained metadata also allows adaptive data locality, delivering predictably high performance by ensuring that active data remains close to the application. And critically, AOS is implemented in user space for optimal resiliency, security, and performance, while enabling AOS engineers to maintain a high pace of robust feature innovation.

The all new Nutanix Blockstore efficiently manages storage media and I/O with lower CPU overhead and lower latency. Blockstore features a user space file system layer and a block management layer that greatly reduces system calls and kernel overhead while servicing I/O operations. Blockstore enables AOS to store data quickly and efficiently on any physical device (NVMe, SSD, or HDD) while reducing wear on NAND-based devices. Initially, it is being rolled out to all-flash systems with one or more NVMe devices, with broader roll-out in subsequent releases. 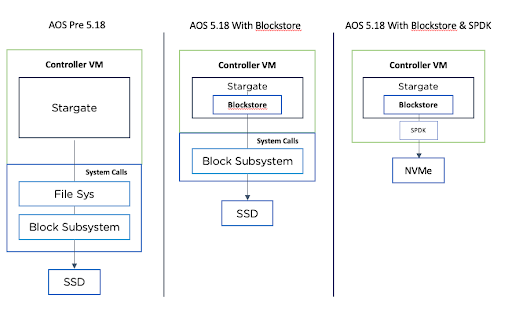 Another example of continued performance innovation is the Autonomous Extent Store (AES), which adds a local performance-optimized metadata store for frequently updated metadata. AES was introduced in AOS 5.11, and has continued to mature to the point where in 5.18 it is now enabled on all-flash clusters, regardless of the number of SSDs per node.

Read more about these features in the AOS performance advancements blog.

Nutanix HCI has supported compression since 2012, and over the years Nutanix engineers have continued to enhance both efficiency and configurability of this capability. Due to improved compression efficiency and the sophistication of the AOS compression algorithms, inline compression is now enabled by default starting with 5.18. Inline compression not only results in improved capacity utilization (and therefore improved TCO), but also improves the performance for sequential workloads without a noticeable impact on random I/O patterns. Compression can still be configured with a delay or it can be disabled entirely when desired.

Inline Erasure Coding (EC) is also now available for Nutanix Objects deployments. Originally introduced in 2015, EC is a distributed algorithm that reduces the amount of capacity needed to protect data from hardware failure by striping data across nodes in a cluster with the ability to recover all of the data in the stripe upon failure. This has historically been performed on data after it has become “write-cold,” meaning that the data hasn’t been updated in a specified timeframe. This prevents continuous recalculation of stripes for every write, which saves compute resources for handling primary storage processing. However, because Objects is designed for workloads where data is written only once (referred to as Write Once Read Many, or WORM), data can be erasure coded immediately for maximum storage efficiency.

Along with these enhancements to the data path itself, new visualization functionality has been added to Prism to give administrators greater insight into their storage resiliency and utilization.

AOS automatically replicates data within a cluster, protecting against failures and keeping data balanced across the cluster, and alerting administrators to hardware failures or space constraints that require attention. AOS 5.18 introduces a new enhanced Storage Summary Widget, giving administrators additional insight into how AOS stores and protects data. The new widget adds additional visual cues as well as new details about how much data has been written and how much space remains in the cluster. And by clicking on “view details,” an administrator can view storage consumption broken down at a node level.

By default, data allocated within an AOS cluster is thin-provisioned, meaning storage capacity is consumed when data is written instead of when the storage is allocated. This means that administrators can over-provision storage, where more storage capacity is provisioned than is actually physically available. For this reason, Prism now reports the Storage Over-Provisioning Ratio on the storage pane, making it much easier for administrators to track how much storage is over provisioned.

The import and export of VM appliances packaged as OVAs is now fully supported for customers running Nutanix AHV. Nutanix Prism image management service is also expanded to make it simple to create, manage, and distribute OVAs across your Nutanix environments.  Check out this video on the new AHV Mission Control site for a quick overview of the feature.

As IT teams help businesses across the globe realign to their workforce working remotely, empowering end-users to work seamlessly from the comfort of their home-offices becomes a key requirement. SSR support for end-user VMs protected with Leap is a tool that allows users to rapidly recover a known “good copy” of the file without any storage administration intervention. By transitioning the protection of end-user VMs from protection domains to Leap we have kept the transition completely transparent to the user.

Business critical applications need multiple layers of protection and recovery options for businesses to continue after a multi-failure event. With 5.18, workloads protected with Nutanix Metro Availability on VMware vSphere can now also be protected with Commvault Intellisnap. Customers can now recover from an offsite backup copy enabled by Commvault Intellisnap protection when the 0-RPO copy may not be useful in scenarios like ransomware attacks.

As of the AOS 5.18 release, Prism Central is shipped separately from AOS, increasing product velocity and improving flexibility for customers. Read about the new Prism release cadence, licensing levels, and the latest enhancements in the Prism Updates blog.

© 2020 Nutanix, Inc. All rights reserved. Nutanix, the Nutanix logo and the other Nutanix products and features mentioned on this post are registered trademarks or trademarks of Nutanix, Inc. in the United States and other countries. All other brand names mentioned on this post are for identification purposes only and may be the trademarks of their respective holder(s). This post may contain links to external websites that are not part of nutanix.com. Nutanix does not control these sites and disclaims all responsibility for the content or accuracy of any external site.  This post may contain express and implied forward-looking statements, which are not historical facts and are instead based on our current expectations, estimates and beliefs. The accuracy of such statements involves risks and uncertainties and depends upon future events, including those that may be beyond our control, and actual results may differ materially and adversely from those anticipated or implied by such statements. Any forward-looking statements included in this post speak only as of the date hereof and, except as required by law, we assume no obligation to update or otherwise revise any of such forward-looking statements to reflect subsequent events or circumstances..