The Key to Accelerating Innovation in the Public Sector

It has been a busy year for the partnership between Nutanix and Veeam: a lot of new offerings and ways to protect your data with a simple, flexible, and reliable approach. Nine months ago, we started talking about the new features coming in Veeam Availability Suite v10, with the continued effort to support customers moving to Nutanix AHV as their hypervisor of choice. A lot of those features can be found here in another blog post.

As you can see, that’s one area Veeam has been focused on to continue protecting Nutanix AHV VMs alongside the existing virtualization capabilities.

That hasn’t been the only big focus. There was also Nutanix Mine with Veeam, the solution that provided a simple option to easily add data management capabilities to any environment. It has been just over 12 months since the engineering partnership began on this solution.

What is Nutanix Mine with Veeam?

Nutanix Mine with Veeam is an integrated solution that brings the highly scalable and agile hyperconverged infrastructure of the Nutanix platform together with the enterprise‑class data availability that comes with Veeam software.

It’s a turnkey solution that simplifies your data protection between on premises and cloud. 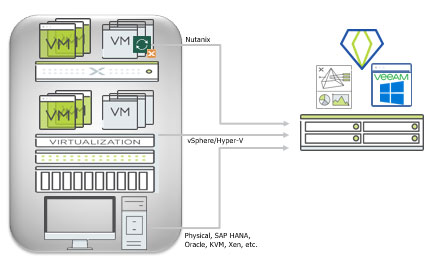 Another important factor of Nutanix Mine with Veeam is the automated deployment known as “Foundation for Mine.” By taking away a task and automating that deployment, it offers complete simplicity and flexibility on how you leverage the features and functionality within Veeam Backup & Replication.

The other thing to mention is when it comes to the visibility of your data, there’s a dashboard built into the automated deployment that shows capacity monitoring and alert status from Veeam Backup & Replication — this is piped into Prism Element. All that information is in one place for complete visibility. 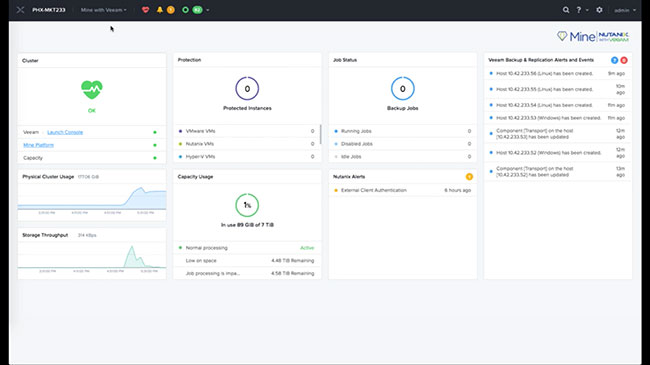 Veeam Availability Suite v10 was the biggest release to date for Veeam Software — full of huge features and capabilities that our customers and industry demand. Veeam is traditionally known for its data protection roots of protecting virtual workloads and, more recently, adding the ability to protect Nutanix AHV alongside VMware vSphere and Microsoft Hyper-V. But the last two years at Veeam have been about broadening that platform, providing the ability to protect your physical workloads running on both Windows or Linux, SaaS-based workloads such as Microsoft 365, and another addition to v10 was the ability to protect NAS workloads for your unstructured data, all while being able to advance where and how you store data, from spinning disk to tape and then off to Object Storage.

Nutanix Mine with Veeam takes full advantage of the ability to take an integrated, automated solution and to protect any workload.

What does this mean?

This capacity tier feature enables the ability to leverage object storage for storing longer-term retentions of your backups while removing the storage overhead on the local performance tier, reducing cost on a potentially expensive disk but also giving you the option to store a secondary copy of your data in object storage.

This has been tested with Nutanix objects and can truly enable you for the all-in-one Nutanix environment end to end.

The final feature I want to mention, but by no means is this the last feature in the long list of Veeam Availability suite features, is NAS backup. We already mentioned that Veeam is able to protect virtual machines from the top hypervisors in the industry. We can protect physical images as well by using the same Nutanix Mine with Veeam integrated solution. In Veeam Backup & Replication v10, we added the ability to protect NAS-based unstructured data. This could be based on SMB or NFS devices natively, but it could also be flexible with the ability to protect Windows or Linux file servers out there in the same fashion.

Nutanix Files is an option here for that source target to be protected and has been fully certified “Nutanix Ready” for file backup, which provides full protection for that unstructured data with this new feature.

What makes NAS backup different from others?

We had to be flexible and agnostic to what we backed up. The ability to back up multiple source NAS or file servers increases the options and flexibility for using this feature.

The speed in which we need to move this ever-growing amount of unstructured data is only increasing backup windows, so we had to look at how we made this process more efficient and as fast as possible. This has been achieved with Changed File Tracking, the ability to understand what has changed since the last backup without having to walk the entire file and folder structure of the NAS device, (this is one of those limitations I mentioned regarding NDMP). There are many other reasons why NAS backup is different and more can be found here.

I think that wraps up an action-packed year between the two vendors and how joint engineering continues to drive innovation in this space.