We are excited to announce a huge milestone for our pioneering HCI software, Nutanix® AOS and the release of Nutanix AOS 6 software. Ten years after launching our market-making HCI solution at VMworld 2011 (and winning the Best of VMworld award), Nutanix’s AOS™ infrastructure software has matured into the industry standard platform for virtualized datacenters, and now we’re helping our customers bridge into the hybrid cloud.

Available today, AOS 6 introduces a set of groundbreaking new features while continuing to build on the core capabilities of our differentiated architecture. This release improves support for mission-critical workloads by making it even easier to achieve maximum performance as well as improving visibility and control of cluster resiliency. Additionally, AOS 6 simplifies securing and protecting large scale deployments with the help of long awaited capabilities including flow networking and the new DR dashboard.

Nutanix AOS protects application data for workloads running on an HCI cluster by storing multiple copies of the data. AOS stores multiple copies on different nodes within the cluster so data can be automatically recovered in the event of hardware failure. This is known as Replication Factor, and until now could be configured to create either 2 or 3 copies (RF2 or RF3, respectively). Many modern big data applications such as Hadoop®, SAS Analytics®, Splunk®, and NoSQL® databases protect their own data at the application level instead of relying on the underlying infrastructure. Traditional SQL databases also often store some temporary data that is ephemeral in nature and doesn’t need to be protected. These workloads do not require additional data redundancy from the storage platform.

Nutanix AOS now supports storage containers to be created with Replication Factor 1 (RF1) which means data is not replicated for redundancy. This enables 2 key benefits: 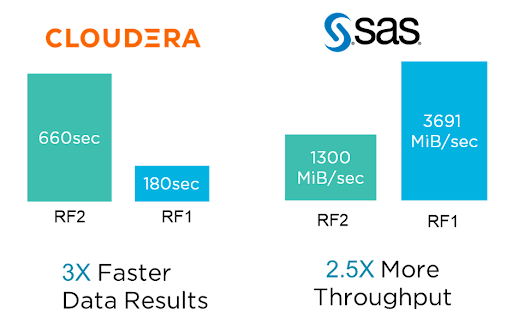 In addition to new features that deliver performance gains, Nutanix also continues to enhance the underlying architecture. One of those enhancements has been around improving performance immediately after events like VM migrations and Controller Virtual Machine restarts due to planned and unplanned events. Applications that have a large working set and high IOPS requirement are particularly affected by these types of events due to the in-memory cache being invalidated. The new Metadata Re-warming feature now actively prefills the metadata cache ensuring application performance reaches optimal state quickly after planned and unplanned events.

Nutanix introduced Autonomous Extent Store™ (AES) in AOS 5.11 which brought metadata locality to its architecture to maximize the benefits of data locality. AES split the single global metadata layer into a separate global metadata layer for the logical attributes and a local metadata layer for the physical attributes, which significantly improved performance for applications that perform sustained write operations. Until AOS 6.0, AES could only be enabled on newly deployed (i.e., greenfield) clusters. Now with AOS 6.0, existing non-AES containers on clusters that meet the requirements will be converted to AES automatically delivering performance gains for the customer with the same hardware through a process running in the background.

Support for Next Generation of Platforms for Hybrid Cloud Deployments

Nutanix announced software support for the next generation of server platforms based on the 3rd Gen Intel® Xeon® Scalable processors (code named Ice Lake), providing customers with a lower Total Cost of Ownership (TCO) than prior platform generations. Notable enhancements include greater customer choice of platforms and configurations, improved compute performance with up to 42% more processor cores, and up to a 33% increase in host memory density and performance.

The Storage Summary and Resiliency widgets simplify capacity monitoring and visibility. Now there is a “Reserve Rebuild Capacity” setting that can be configured on a cluster to guarantee that there is sufficient capacity to rebuild in the event of a node failure. When configured, the cluster reserves the capacity of the largest node within the cluster, such that if a node fails there will be room to rebuild and go back to full resiliency.

This setting is particularly useful for environments with high volumes of mission-critical data, but it can be left disabled for environments where manual intervention would be preferred to strictly enforce the rebuild capacity. 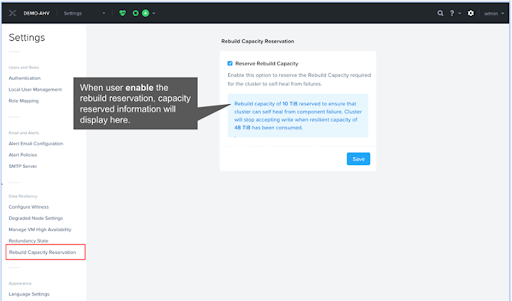 The Storage Resiliency widget has also been enhanced to bring greater insight to the current resiliency status of the cluster. The level of fault tolerance (FT 1 or FT 2) and the current fault domain (rack, block, or node) are now displayed. The widget now indicates if either has changed from its configured state. There is also a details page that provides fault tolerance information for each of the underlying components.

Perhaps the most significant is a new rebuild progress indicator has been added that enables administrators to track the time remaining until full resiliency has been restored to the cluster. The rebuild calculation uses distributed algorithms that take into account a large number of factors including the capacity to be rebuilt, the number and speed of individual drives, the number of nodes participating in the rebuild operation, and even the current I/O load on the cluster. 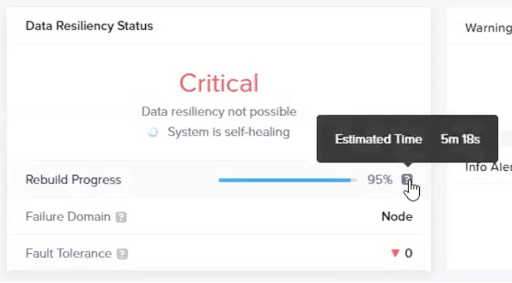 Nutanix customers manage their global HCI environment with the Prism Central™ management console, which provides a single interface for managing multiple geographically distributed HCI clusters. The Multi-Cluster Resiliency widget in Prism Central combines the functionality of the Storage Summary and Resiliency widgets into a single multi-cluster dashboard that makes it easy to monitor the capacity utilization and resiliency of all clusters from a single place.

This makes it easy for administrators to view the capacity and resiliency metrics for their distributed HCI deployment and take appropriate action. The metrics views were redesigned aesthetically to help consume the information easily and more meaningfully. 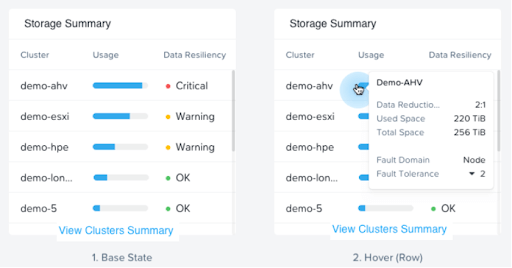 BCDR offerings have been core features in AOS right from the beginning. In AOS 6.0 we continue to innovate with the release of AHV® Metro Availability. AHV Metro Availability is for applications running the AHV hypervisor which require zero RPO and near-zero RTO for disaster avoidance as well as automatic recovery during DR events. This feature leverages synchronous replication to keep mission-critical applications within 5ms or less latency in sync. To configure and leverage all aspects of AHV Metro Availability, Prism Central now includes Protection Policies, Recovery Plans, as well as, the Witness to automatically failover during an unplanned outage. This provides customers with a full featured DR solution on the AHV hypervisor.

In this world of mission-critical applications, extremely low I/O latency is often essential. In such a scenario the strict latency requirements of 0-RPO necessitate that such applications be protected without any burden on latency. Often such applications, which serve businesses, also need to be protected against multiple failures. Nutanix NearSync replication to multiple sites now extends our Continuous Data Protection (CDP) approach across multiple sites to provide an additional layer of protection against multiple downtime events across sites.

Nutanix BCDR solutions have expanded from on-premises to multiple clouds.  Leap® and Nutanix Clusters™ on AWS observability has become a priority for customers in their hybrid cloud journey with Nutanix. With the AOS 6.0 release, we are adding a dashboard in Prism Central that will provide insights into some key performance indicators around DR like RPO SLAs across clouds, DR readiness, alerts, etc. With single PC support for Leap, customers can now have a single pane of glass view to monitor capabilities across all their Prism Element deployments running in different cloud environments. 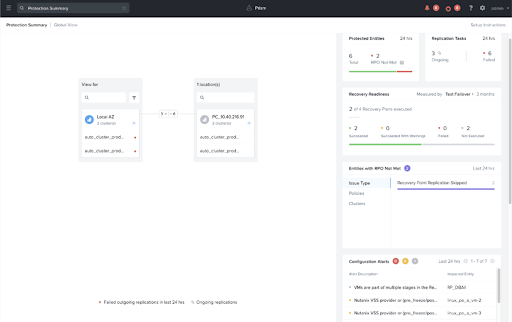 For networking, one of the most widely requested features by customers was port mirroring which allows the ability for customers to take the traffic on a specific port and mirror that to another port for the purpose of further analysis.

Another customer use-case and ask has been the need to associate multiple IP addresses to a Network Interface Card (NIC) in order to simplify load balancing, high-availability, and failover. These additional IP addresses are often called Secondary IPs. With this new capability introduced In AOS 6.0, customers can easily map external IP addresses to services running inside VPCs, even if that service has multiple addresses.

Cluster expansion has been enhanced with AOS 6.0 to give more control to the end user. Previously for cluster expansion, the individual nodes had to be prepared and then added to the cluster. With AOS 6.0, there is an option to decouple those things now. Customers can choose to prepare nodes first which includes setting up host networking and installing AOS and AHV versions. Customers can then choose to expand the cluster by adding this prepared node which is a quick process.

Prism has AI capabilities in its X-Fit engine using which it has been able to provide runway analysis for CPU, memory, and storage for clusters running AHV. With AOS 5.19 and PC 2020.9, Nutanix introduced support to monitor vCenter instances, bringing to Prism the ability to monitor VMware® VMs and hosts even when they aren’t running on Nutanix HCI. Building on that with AOS 6.0 and PC 2021.5, Nutanix can now also provide vCenter Server® capacity runway leveraging the same algorithms in X-Fit engine and mapping it to appropriate metrics from vCenter Server. This allows customers to now use Prism and its unique AI capabilities to monitor their entire virtualized infrastructure, even when some of it remains on legacy infrastructure.

To take advantage of these new capabilities, simply upgrade your cluster to AOS 6 from Prism with the Nutanix Life Cycle Manager™ (LCM) tool, and read more about what’s new in the AOS 6 Release Notes. To learn more about these features and more, watch the breakout sessions and keynotes from the Nutanix .NEXT 2021 global users conference.

© © 2021 Nutanix, Inc.  All rights reserved. Nutanix, the Nutanix logo and all Nutanix product, feature and service names mentioned herein are registered trademarks or trademarks of Nutanix, Inc. in the United States and other countries. Other brand names mentioned herein are for identification purposes only and may be the trademarks of their respective holder(s). This post may contain links to external websites that are not part of Nutanix.com. Nutanix does not control these sites and disclaims all responsibility for the content or accuracy of any external site. Our decision to link to an external site should not be considered an endorsement of any content on such a site. Certain information contained in this post may relate to or be based on studies, publications, surveys and other data obtained from third-party sources and our own internal estimates and research. While we believe these third-party studies, publications, surveys and other data are reliable as of the date of this post, they have not independently verified, and we make no representation as to the adequacy, fairness, accuracy, or completeness of any information obtained from third-party sources.