Nutanix Combines all Business Workloads onto One Single Platform 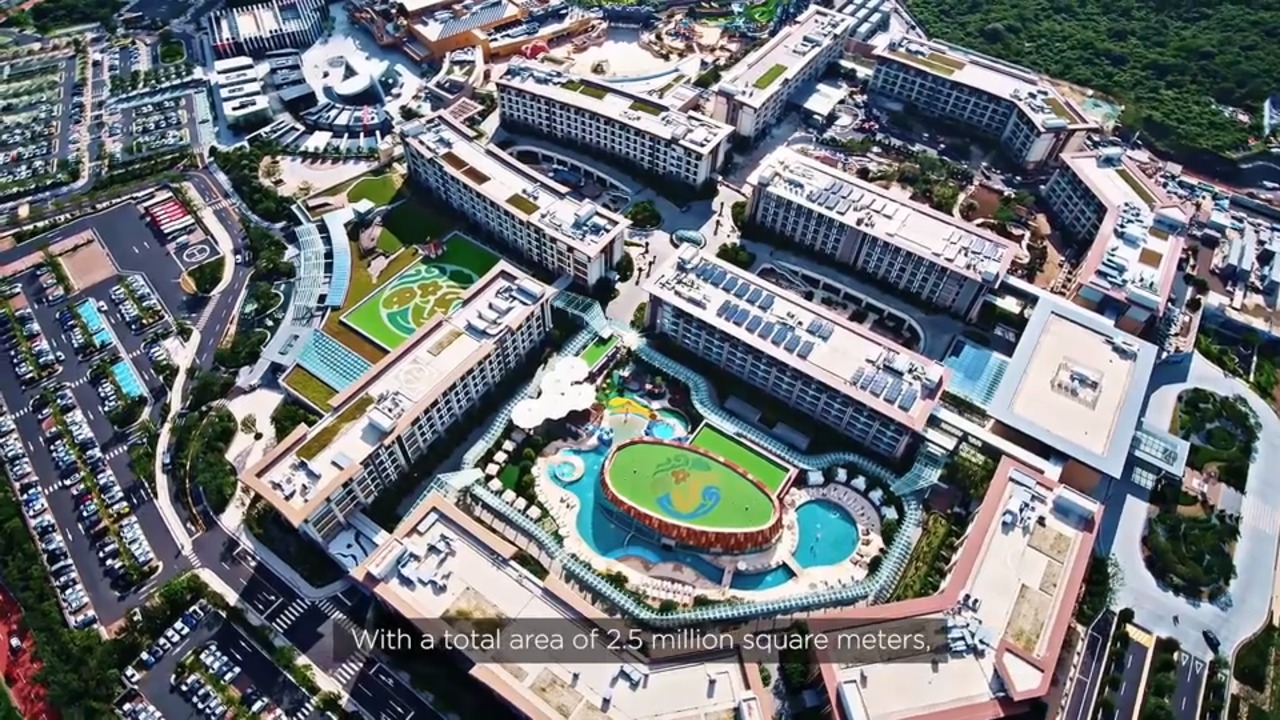 CIOs should always be concerned about money, time, and new technologies that can reduce risk. Sometimes they fail, and they do not even challenge themselves. Nutanix has addressed this challenge in many areas and has become a catalyst for challenging new technologies. What if we have not built SDDC… what if we have not chosen Nutanix... I don’t dare to imagine that situation at all.

Jeju Shinhwa World is a fully integrated South Korean resort located on Jeju Island. The resort has a casino, multiple theme parks and hotels. Developed and operated by Landing Jeju Development, a subsidiary of Landing International, Jeju Shinhwa World is the largest in both size and value in Korea. Situated on an extensive site of 2.5 million square meters, Jeju Shinhwa World has four 5-star hotels with 2,500 rooms, complete with large-scale entertainment facilities like theme parks, water parks, KPOP centers and casinos. Its MICE (Meeting, Incentives, Convention Exhibition) facilities are capable of accommodating up to 2,000 people, and 50 varieties of dining and shopping zones.

Among its many firsts, Jeju Shinhwa World is also the first in Korea to build software-defined datacenter (SDDC), the next-generation model in which all IT resources including computing, networking, and storage are virtualized, and all management and configuration changes are made through software, not physical infrastructure control. New beginnings always present new challenges. Although Jeju Shinhwa World had confidence in the technology concept, it was necessary to thoroughly verify whether it was suitable for the resort’s actual environment.

Complexity with more than one platform
Building a data center requires at least 20 to 30 IT technology companies to participate in the project. Jeju Shinhwa World regarded this as a factor that would increase management complexity and lower operational efficiency. The more disparate technologies and platforms applied and mixed within the solution, the more difficult it would be to migrate to the infrastructure, upgrade it in the future, or resolve issues with those new technologies. Lee Jong-rae, CIO of Jeju Development, said, “I know how important it is to minimize management complexity. It was our mission to be as independent as possible, with a simple configuration based on a new technology.”

Reaching 100% virtualization
Server virtualization is already a common technology; however, in addition to servers, Jeju Shinhwa World wanted to implement a 100% virtualization environment for both network and storage as well, particularly storage virtualization. This is because the initial cost of introducing traditional three-tier storage is high, and it causes frequent disruption. Jeju Shinhwa World had previously focused on alternative technologies, such as Fiber Channel over Ethernet (FCoE) and Storage Area Networks (SAN), however, Hyperconverged Infrastructure (HCI) integrates all of these technologies into one platform.

Ensuring application compatibility and reliability in the virtualized environment
As Jeju Shinhwa World is a large complex resort, they needed to deploy most of the applications essential to the hospitality field. A total of 88 applications, including its business-critical, Oracle OPERA PMS, IGT casino game software, Agilysys POS solution, SAP ERP and HANA DB, had to run in the SDDC-based virtualization environment. The project was very complex, and some of the applications were still in the midst of technical certification for the HCI environment during the construction stage. Lee Jong-rae, vice president, said, “In terms of risk, we had confidence in the HCI technology, so we decided to set ourselves up to take the test scenarios for various situations and go through our own verification thoroughly.” Nearly all of the applications had been certified at the time of project completion.

Jeju Shinhwa World believes that the key factor in building a successful SDDC is the introduction of HCI technology which converges compute, storage, virtualization, and networking into one platform. Jeju Shinhwa World reviewed several HCI solutions and some of the key evaluation criteria included:

Jeju Shinhwa World selected Nutanix’s Acropolis OS (AOS) solution, which offers hyperconverged infrastructure technology while incorporating its native hypervisor AHV. Mr. Lee Hee-sang, a manager of Landing Jeju Development who tested SAP ERP and HANA DB on the HCI for the first time in the global market, said, “We tested as many scenarios as possible. We decided on Nutanix after confirming that there was no problem in all possible failure situations such as real-time replication, DB procedure checks after forced shutdown, file system tests, data transfers in activestandby state, etc. The most surprising thing was that the virtualization environment was no longer slow.” Lee Jong-rae said, “Other similar solutions were either unsatisfactory in terms of technical maturity or had an architecture with exclusivity. Nutanix was more than ready to be applied to the enterprise and had the most independent technology architecture. Some of the applications are still in the progress of technical certification for Nutanix, but we have confidence in the architecture of the technology we chose.”

Unbelievably fast provisioning
It only took three weeks and three engineers from the Server Infrastructure Team for Jeju Shinhwa World to install and test the main applications, including the ERP, PMS, POS, ticketing and e-mail applications on more than 420 virtual servers and storage systems. In order to achieve the same result in the previous environment, it would have taken five to six months just to set up the server and storage hardware infrastructure, and this timeline has yet to include deployment of applications.

Migrations ended earlier than expected
Jeju Shinhwa World had an amazing experience when migrating the casino servers from the existing three-tier server environment to SDDC. They originally planned to allocate a two-day period to migrate the existing VMware ESXi-based virtualization environment of the casino server over to Nutanix Acropolis, but it was completed in just four hours.

All business workloads running on Nutanix
The datacenter of Jeju Shinhwa World is now running all of its business applications on a single Nutanix cloud platform, including its Oracle DB, Opera PMS and SAP HAHA; MS Exchange mail, VDI systems and POS systems for employees; and digital signage, IPTV, and IP telephones in all rooms for resort visitors. A total of 88 applications, three heterogeneous DBMSs using 462 cores, and about 2,000 virtual machines that used to be operated individually are now running non-stop 24 hours a day, 365 days a year, managed via Prism on 72 Nutanix nodes through AOS.

Real-time monitoring and capacity prediction analysis
Lee Jong-rae, CIO of Jeju Shinhwa World, looks at the Nutanix Prism screen every morning. It is used for real-time checking of key performance indicators, such as key resource utilization and IOPS. He commented, “It analyzes and estimates when our resources will overflow. If Prism was not provided with such capability, we would have to use a separate monitoring tool and have a separate workforce to customize and manage it.”

Ensuring business continuity with no IT service disruption
Lee Hee-sang, managing director of SAP ERP and HANA DB, said, “Even if you patch an OS to SAP, it can take 10-20 minutes for each server to restart after installing the patch. Nutanix completes these tasks within one minute, and with a simple click of the mouse. Previously, we would have patched our infrastructure every 2-3 months, each taking about two hours to patch four production servers, with a planned downtime of 30 minutes to one hour. Nutanix is very different.” In fact, Nutanix software is designed with a philosophy of enabling applications to tolerate infrastructure service failures.

Immeasurable cost savings
It took three engineers to build the two datacenters and just four members of the infrastructure team to manage and operate the environment. Since storage systems, fiber optic cables, or switches are not needed due to the full virtualization-based SDDC implementation, Jeju Shinhwa World ended up using only 60% of the planned footprint in the datacenter architecture design. This also reduces the cost of introducing racks, UPS, and air conditioners, as well as infrastructure management. It is estimated that the datacenter installation cost was reduced by about KRW 20 billion (or approx. $18 million USD) when compared to legacy infrastructure.

Jeju Shinhwa World has earmarked plans to gradually upgrade its SDDC. The business intends to utilize a hybrid cloud approach with the first phase, comprising the move of certain backups to the hybrid cloud. They also wish to relocate one of the two datacenters implemented as a DR environment to a much further location, as well as review new models, such as SDN, that were not implemented previously due to insufficient testing. With all of these new plans, Jeju Shinhwa World hopes to be recognized as the global reference model for SDDC.