Battle of the Clouds: Differences Private vs. Public vs. Hybrid

A straightforward breakdown for how to choose cloud services and delivery models that are right for your organization.

Many can say that cloud computing is the silver lining in the IT ecosystem for most businesses today. Cloud computing powers many smartphone apps as well as services that people and businesses connect to over the internet. Cross-functional teams can use their vast capabilities to simplify business operations.

Early adopters in the business world were considered brave when they risked handing over control of their data and processes to cloud service providers. Today, managing IT and communications over the cloud has become de rigueur.

Data from Research and Markets shows that the cloud computing marketing which stood at $272 billion in 2018, will grow to $623 billion by 2023, at a CAGR of 18% Y-o-Y. In fact, BetterCloud’s State of the SaaS-Powered Workplace report found that the average organization uses 16 cloud apps in its day-to-day functioning, while McAfee reports that most organizations use a staggering 1900 cloud services a year (but are aware of only 30)!

With the massive exodus to the cloud, 80% of companies are predicted to close their traditional data centers by 2025, according to Gartner Research.

So if everyone’s moving into the cloud, how do we make room? How will Company A differentiate its services from Company B, if both run on the same technology foundation? How will companies living in the cloud protect their data, systems and intellectual property from being compromised? Enter the different avatars of the cloud.

The Many Dimensions of Cloud Computing

More than one in four developers prefer to develop software on cloud platforms. Over half of all software testing, too, is now done in the cloud. The cloud is like a multiplex movie theater that has something to offer everybody.

This means the cloud can serve the IT specialist in the company by providing networking and infrastructure services with IaaS or Infrastructure as a Service. It can offer a sandbox for software development and testing for programmers with Platform as a Service or PaaS. It can even offer ready-to-use software applications that are directly used by end users via Software as a Service or SaaS. Each of these cloud computing service models offer users varying degrees of control, customization options and security. 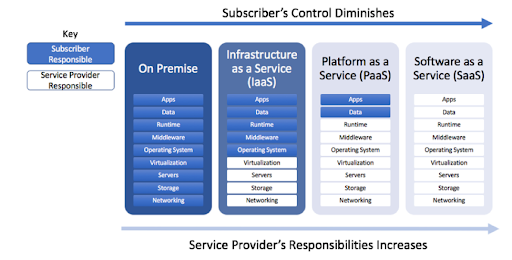 Another aspect to consider while investing in cloud services is the type of service your data and systems will live in. This is a little like choosing a place to stay on vacation. From booking a room in a hotel to booking a room with a stay sharing service like Airbnb to outright living in a vacation home, the choice depends on a combination of budget and needs. In other words, companies and users can pick between distinctly different cloud delivery models, each with their own pros and cons. 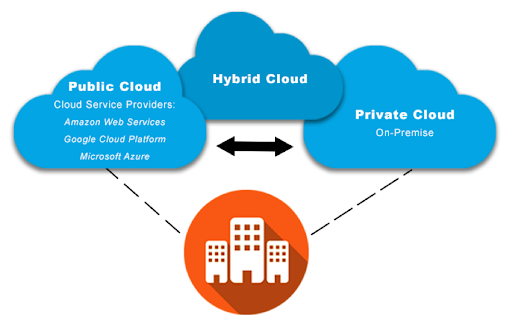 Getting on the cloud can be managed in three main ways – via the public cloud, the private cloud or a hybrid cloud model.

The public cloud is probably the largest of all the various cloud delivery models. In this model, third party cloud service providers offer end users the ability to access a range of services like email, social networking, marketing applications, data storage and more. All the resources used to deliver these services are owned and maintained by the third party service provider (e.g. Amazon Web Services, Microsoft Azure, Google Cloud Platform) and are shared by all users or subscribers to such public clouds.

Most SaaS platforms operate via the public cloud and are able to offer users unlimited scalability without making a big dent in their operating budgets.

The Wiltshire Council in south-west England embraced Microsoft’s public cloud for improving service delivery to the county’s 466,000 citizens. By using Microsoft’s Dynamics CRM for managing user data, Microsoft Lync for communication among its 4500+ employees and Office 365 for worker productivity, the Council saved over GBP 5 million in IT expenditures between 2009 and 2012.

It also jumpstarted efficiency and collaboration by allowing employees to communicate faster, better and work remotely in case of bad weather. Citizens could now log onto the Council’s website and look up services by simply entering their unique identification numbers.

Cloud services that are targeted towards just one company at a time, where all resources are used exclusively by one organization, typically come under the definition of private cloud. Infrastructure like servers and data centers may be located on premises or may be maintained in a remote location and managed by a third party vendor, just for a single company. Consider the private cloud as an extension of a company’s IT department with the help of a third party service.

Private cloud is deal for companies that are highly concerned about data security and are subject to strict data compliance regulations, and can be easily scaled up or down without incurring very high costs, to respond to seasonal demand fluctuations. The downside includes high upfront capital expenses and steep learning curve for internal teams.

E-commerce giant eBay’s pure-play marketplace model means it operates within a strict regulatory environment, with PCI compliance issues to boot. Thanks to these constraints the company operated entirely out of its fully-owned, on-premises data centers.

However, with the pressures of a booming e-commerce market, eBay realized that it needed to scale its IT operations, while still maintaining the security, compliance and control that on premise data centers offered. That’s when they decided to build (in-house) a private cloud based on the OpenStack platform.

The move to the private cloud brought with it clear visibility of asset utilization and helped in capacity planning. Software development has improved too.

“For one, we have brought down the app-provisioning time for our developers from four weeks in the data center infrastructure to 30 minutes in the cloud,” said Suneet Nandwani, Head of Cloud Engineering at eBay.

Operational efficiencies are rolling in, even as the company saved double-digit million dollars in hardware costs.

There are also hybrid multicloud systems, like the Nutanix Enterprise Cloud, which help organizations manage all their various cloud ecosystems from a single, unified platform. Hybrid clouds allow companies to spread their apps, data and systems across a choice of private and public clouds, based on most critical requirement for each resource.

For instance, mission-critical enterprise software may run on a private cloud, while applications like marketing automation tools that require lower security controls may be hived off on the public cloud.

Social gaming leader, Zynga decided to add a private cloud to its pure-play public cloud investments in AWS, thus creating one of the best examples of a hybrid cloud model. As Zynga’s popularity soared to reach more than 250 million monthly active users, the company realized it could not build or buy infrastructure fast enough to keep pace. This early idea led to it moving its data and systems on the AWS cloud.

However, as the company went public and stock holders’ pressure starting impacting business decisions, Zynga saw owning some of its IT infrastructure once again as a way of turning its large operating expenses into capital expenditure that could be written off on its books. This drove it to build the zCloud – its own private cloud that lived alongside the AWS cloud in Zynga’s IT ecosystem.

The move helped Zynga save thousands of dollars in the form of depreciation write offs, reduced operating expenses, improved operating margins, all while also offering tighter control over their IT systems with its private cloud investment. At the same time, its AWS cloud setup helped it manage the scale of operations required by its large and rapidly growing customer base, without significant investments in training, maintenance and security.

Research by Flexera reveals that 84% of enterprises have a multicloud strategy, with 58% reporting a hybrid approach to cloud computing. This figure has steadily grown from 51% in 2018, showing a clear preference for companies to veer towards tasting the benefits of both public and private cloud deployments.

Where we shall be five years from now is anybody’s guess, but for now, one thing is certain: Companies are not shying away from making the most of what each type of cloud service model has on offer and are mixing and matching services to suit their unique needs.

Dipti Parmar is a contributing writer. She has written for CIO.com, Entrepreneur, CMO.com and Inc. Magazine. Follow her on Twitter @dipTparmar.