Hyperconverged infrastructure lets CTOs strike a balance between cutting down wasteful IT spending and investing in business innovation while controlling operational costs.

Cost efficiency is one of the biggest drivers of IT implementations and upgrades alike. Unlike other business functions, such as marketing, cost savings in IT are synonymous with resource optimization. It's not just a number-crunching exercise designed to pull software or hardware expense within the allocated budget – it is a well-defined and continuous set of processes that aims to maximize performance and value out of every dollar invested in technology.

No surprise, then, that smart CTOs are looking to hybrid cloud models with scale-out hyperconverged infrastructure (HCI) while upgrading their existing IT infrastructure or data centers.

In fact, over a quarter of respondents to a survey that was part of the 2018 State of the Enterprise Datacenter report by ActualTech Media and Nutanix reported that reduced costs were one of the primary benefits realized by implementing an HCI: 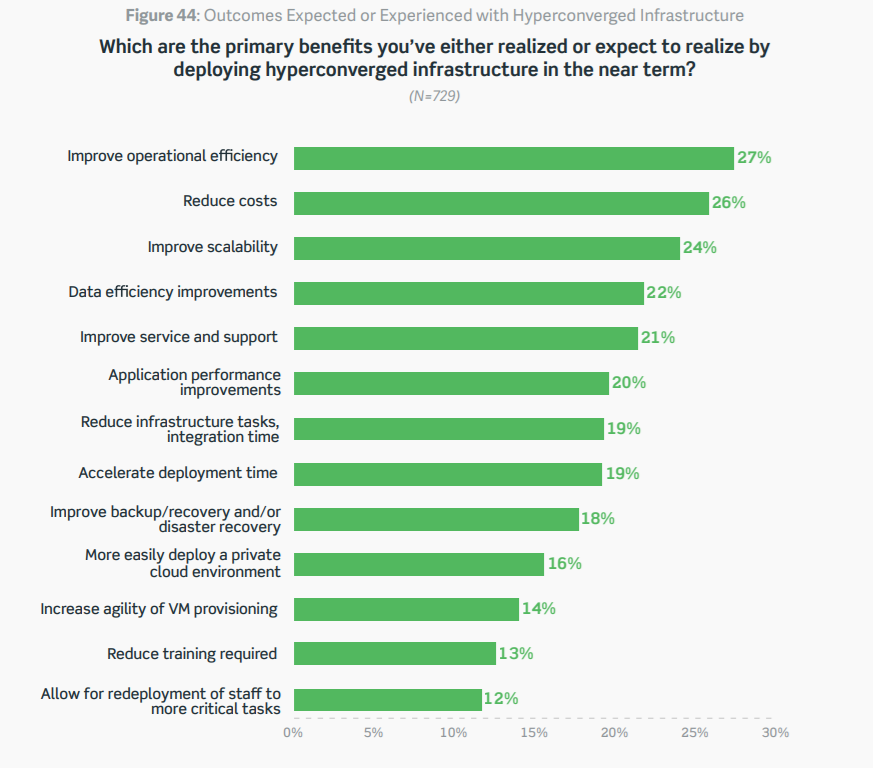 Source: State of the Enterprise Datacenter

Further, an IDC study on the cost savings in organizations using the Nutanix Enterprise Cloud platform with a hyperconverged infrastructure (HCI) calculated that they could achieve a staggering five-year ROI of 477% on average by:

Are these benefits replicable for every organization or business? Or is implementing an HCI akin to merely keeping up with the Tech Joneses and building castles in the cloud?

With hyperconvergence, the most significant savings hardware-wise come from storage. HCI creates a software-based Virtual Storage Appliance (VSA) that runs across multiple cluster nodes, all connected by Ethernet, creating a distributed file system on which VMs run.

Traditional infrastructure doesn't match up to the high-density, IO-intensive workloads of VDI. During peak activity periods, the pool of storage units might struggle to handle random IO requests from thousands of virtual desktops. This latency seriously affects end-user performance, resulting in lost productivity and driving down the ROI of the entire solution. In the worst case, it may affect project delivery and lead to process failure, directly affecting revenue.

HCI amalgamates databases, VDI/DaaS, payroll, ERP, and other workloads onto a single platform, automates various processes within these workloads, allocates and re-allocates compute and storage capacity to them, and allows admins to centrally manage the flow and storage of data across multiple systems. It also enables users to leverage shared services, public clouds, and data center facilities to reduce operational costs and complexities.

HCI can consolidate workloads into fewer or a single silo by abstracting underlying resources and dynamically allocating them applications running in VMs. This increases server utilization, even over existing virtualization, in which the workload doesn’t necessarily utilize all the resources available to its VM.

HCI uses containers that abstract the OS and run application modules that can use the same physical resources – compute, storage and network – as applications in other workloads, all with centralized management, offering tremendous cost savings in physical server hardware. 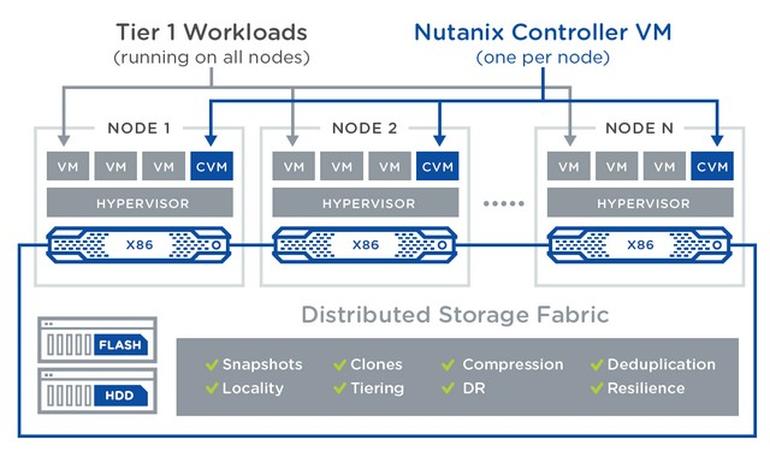 Traditional IT infrastructures are usually built around VDI environments. In a VDI solution, hardware costs make up 40 to 50% of the total expenses, requiring enterprise-grade servers and storage appliances that drive up the initial capital investment and the Total Cost of Ownership (TCO).

The high computing and networking costs often involve moving desktops, user devices and other physical endpoints into the premises for better connectivity with the data center. This begins a vicious cycle of additional space, power, and cooling requirements to keep the data center operating at optimum capacity.

Industry-standard, commodity hardware can be used in infrastructure, eliminating the need for quite a few servers, hard drives, WAN accelerators, SSD caches, and whatnot. This, in turn, reduces the electrical and heating footprint.

“In the past, we would have to build costly, cumbersome solutions, including servers, SAN, backup device, switches, and other components, then wheel a rack into a customer environment,” said Steve Koven, Director of Global Solutions at IGT, after deploying a hyperconverged infrastructure. “It used to take us two to three weeks to order equipment, rack, stack and cable it. Now we can stand up the entire infrastructure and fully test it in two or three days,” he added.

Improvements in agility resulted in reduced delivery times for IGT while allowing them to be more flexible with sales and customize offerings to align with customer needs. “It lets us rapidly provide solutions at an attractive price point while reducing the complexity of deploying them. The result is faster and cheaper for us—and a better solution at the end of the day,” remarked Koven.

Data is one of the biggest assets of a company and needs to be managed accordingly. When the right data gets to the right people on time, faster and better decisions, delivering more business value.

A survey by Harvard Business Review revealed that cost efficiency is a significant benefit of the data-driven enterprise. 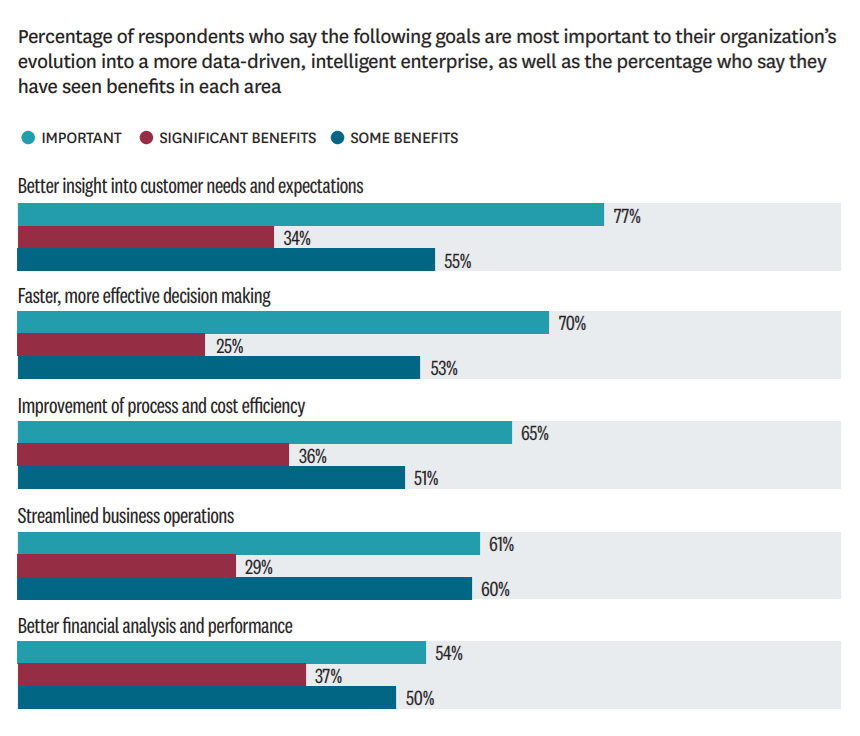 Additionally, HCI enables thin provisioning for all VMs, making sure storage blocks are only used when applications need them. HCI’s high availability, high-performance storage hallmark is owing to data being striped and mirrored across all disks in a cluster. Multiple copies of the data result in better read performance and improved resilience and availability in the event of a failure, without the added cost of duplication.

In every traditional enterprise IT infrastructure, disparate services, solutions, and vendors wreak havoc on the extended IT ecosystem, making it very difficult for consistent application of policies across environments and devices. These invariably lead to inefficient use of resources at best and data loss or compliance violations at worst.

HCI relies on commodity hardware unified by an overarching layer of software that works across on-premises environments and private, public, and hybrid cloud systems. A single, non-native user interface can automate, track and manage tasks across all these systems. It abstracts staff away from the complexities of native storage and computing platforms and services, letting them focus on functional ops. 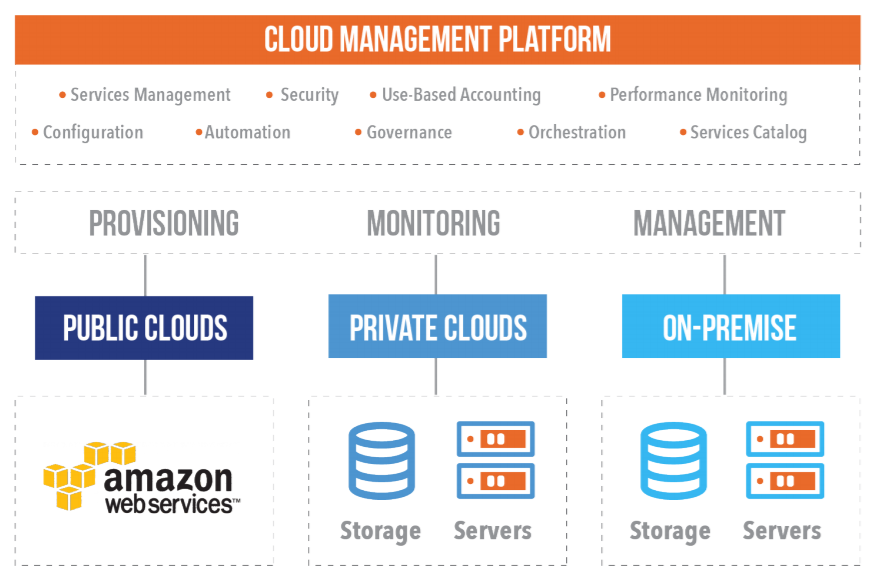 HCI brings the agility and pay-as-you-go benefits of the public cloud to on-premise environments with efficient and centralized governance. Businesses can choose to buy only as much storage or compute capabilities as they currently need, with the option to seamlessly upgrade as they grow. This democratizes the latest tech capabilities and lowers the barriers to entry for SMBs.

Further, vendor acquisition and management – one of the most complex traditional IT infrastructure management processes – is vastly simplified in HCI deployments. Although HCI doesn’t replace the whole datacenter, industry-standard hardware and software mean a streamlined procurement process and fewer vendors overall. Naturally, this leads to cost savings due to faster project turnaround times, quicker deployment and recovery, and less finger-pointing.

One-click automation, one-click upgrades, and one management interface for the full technology stack and clouds is the ultimate enterprise IT utopia. HCI makes it possible to a certain extent and frees up IT staff to work on less monotonous, strategic initiatives – and get a life!

Steve Elgan, IT Director at Heartland Community Health Network, which moved to HCI from traditional infrastructure, summed it up beautifully: “I had my son in my hands, feeding him his bottle, and I just clicked Upgrade. Things had only been in production for about a month, and what used to be a nightmare process was now so simple that I could devote all of my attention to my son instead of a computer screen. I could never have done something like that while upgrading a traditional three-tier infrastructure.”

A Wholesome Analysis of Cost Savings and ROI

With direct savings across the architecture, hardware, software, backup, and recovery, hyperconvergence can transform IT organizations from cost centers to frontline revenue drivers. A major issue in traditional IT architecture was that as complexity rises, the focus shifts from business problems to tech problems. The business’s focus should be on what IT can do for the bottom line, not what the bottom line can do for IT.

“The ability to rapidly resolve issues and avoid significant delays to business processes has been a fantastic achievement,” said Peter Curren, Global Infrastructure Director of Ports America, after his organization consolidated multiple systems on an enterprise cloud built with HCI.

Considering the separate areas of cost reductions discussed above, organizations can evaluate the expense differentials between their traditional infrastructures and the HCI environment. Hyperconvergence helps meet current and future needs, so it’s essential to calculate the TCO accurately.

The TCO of a hyperconverged infrastructure includes annual maintenance fees for data centers and facilities, telecom services, hardware, software, cloud systems, and external vendors. Other costs include staff needed for deployment and maintenance, staff training and efforts to integrate with existing and legacy systems.

And yet, HCI overcomes the enormous wastage of resources and budgets common in the early phases of traditional infrastructure deployments because their scale dwarfs business needs at the time of purchase. HCI lends itself to incremental and granular scaling, allowing IT to add (or remove) resources as the business grows.

A simple worksheet like this helps a business make precise comparisons and record cost savings, projected or realized: 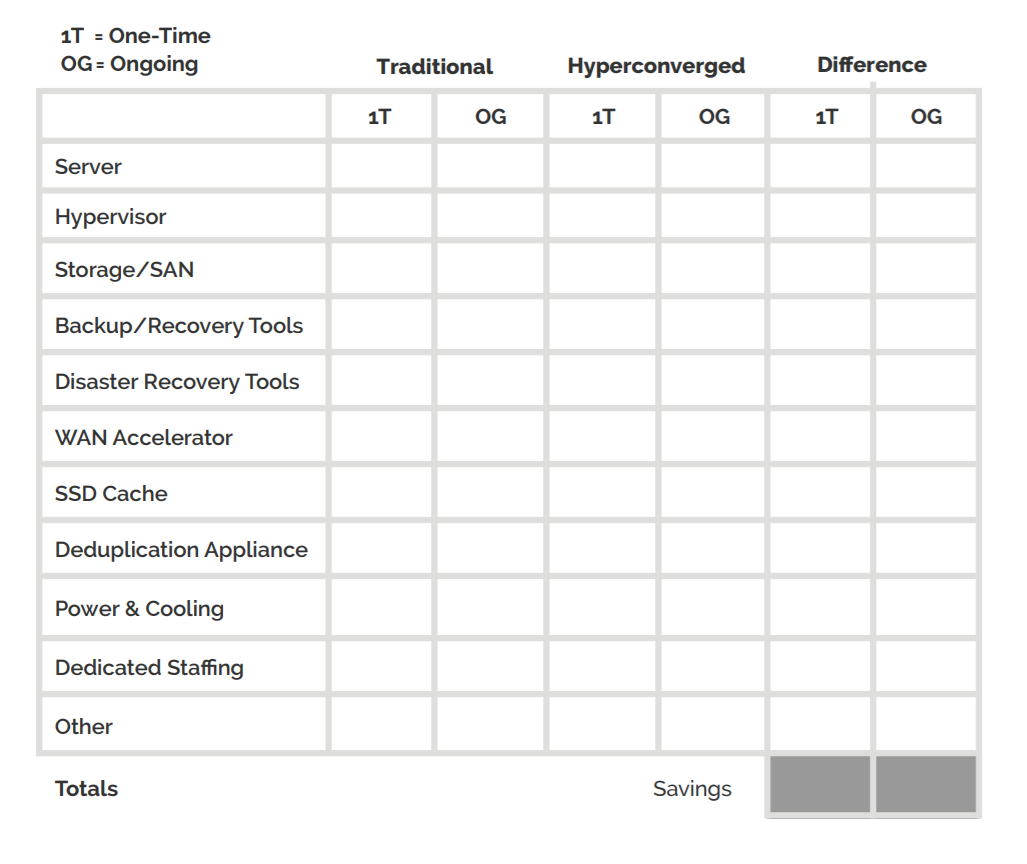 Accurate estimates of CAPEX and OPEX savings help the business calculate the ROI of the HCI. Time saved on operational processes can also be directly tied to cost savings because, in business, time is money.

Jon Walton, CIO of San Mateo County, California, said: “We just conducted an ROI analysis with Steve Kaplan, (then VP of Channel and Strategic Sales at Nutanix), calculating the hard dollars we would have spent if we had continued to grow our traditional architecture ... [we have] already saved over $6 million by moving to the Nutanix hyperconverged configuration, rather than purchasing and deploying all of the traditional server, storage, compute environment we would have required,” he said.

It is important to remember that cost reduction is not synonymous with cost savings across business functions. IT spend is one of the first to be cut in the event of an overall budget reduction. However, more often than not, cost-cutting in the acceptance and implementation of new technology results in increased operational and opportunity costs. 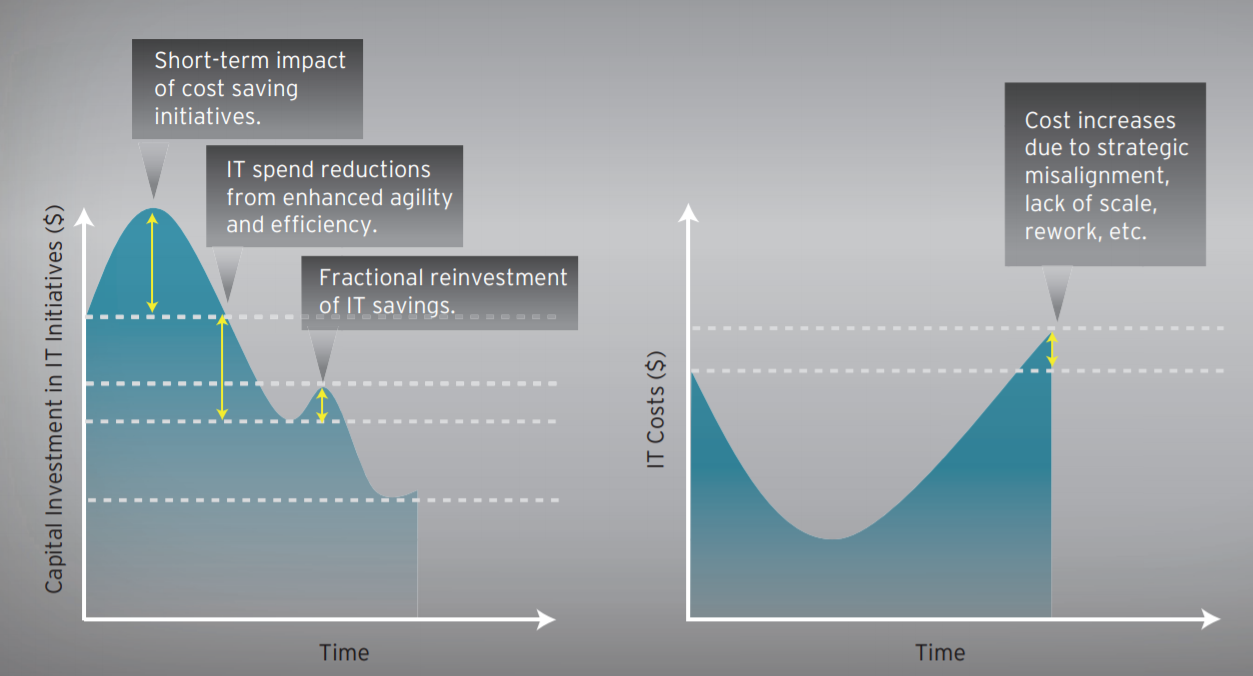 Smart CTOs recognize that strategic cost-saving initiatives such as HCI strike a balance between reduced IT spend as a percentage of revenue and improvements in innovation, resource utilization, and employee productivity, which eventually builds a competitive advantage for the organization.

At the same time, HCI also allows for short-term cost cuts such as workflow consolidation, faster application deployment, better hardware utilization, and reduced cloud licensing, which a business can directly recognize or categorize as cost-saving initiatives. CTOs will be wise to reinvest the savings in subsequent strategic and technological initiatives that drive the business forward.

Dipti Parmar is a marketing consultant and contributing writer to Nutanix. She writes columns on major tech and business publications such as IDG’s CIO.com, CMO.com, Entrepreneur Mag and Inc. Follow her on Twitter @dipTparmar or connect with her on LinkedIn.