Operating systems can end up being a lot of work for administrators. They need to work to configure the image, install the applications, and provide the best user experience possible. As with any software, what is provided to you is what the developer intended, but not necessarily what you want or need for your end users.

This blog series introduces you to Microsoft Windows® Operating System (OS) optimizations, starting with version 1903. I will attempt to keep these optimizations as environment agnostic as possible. Hopefully, these optimizations will be just as good to administrators of physical machines as to a virtual environment utilizing Nutanix Frame, Citrix, or VMware Horizon VDI solutions.

This series aims to share the seemingly infinite number of ways you can optimize a Windows environment, with something for beginners as well as administrators familiar with optimizations but looking to deliver an even better experience within their environment.

This blog addresses the Microsoft Store: its purpose, how it works, and what can be done with it. This particular area of the OS is continually changing and, as such, will require constant management to optimize in the way you desire. This blog potentially saves even more headaches than any other blog in this series.

The Microsoft Store™ , previously known as the Windows Store, is a digital distribution platform. While it has a lot of functionality and uses, such as a unified distribution point for console games and digital videos, the reason it is brought up as an optimization point is because of Universal Windows Platform Apps, sometimes known as AppX packages.

Universal Windows Platform (UWP) Apps are applications that can be used across multiple compatible Windows devices. Why does this matter to you? Because a multitude of UWP Apps, including calculator and certain drivers, are installed in Windows 10, by default using the Microsoft Store. While some of these applications are usually wanted or even necessary, some of them are unnecessary, depending on your use case, and can be removed to improve the performance of a session or login.

How do UWP Apps work?

With UWP Apps, you get a little bit of a hybrid. Each application can be developed as a SUA or a MUA. However, if it is developed as an SUA, it can be installed for every user that logs into the machine. This means that every new user that logs in to a machine has the potential to have these UWP apps installed in their profile at some point or another, whether or not you want them or need them.

For the purposes of this blog, we will be focusing on Single User Application UWP Apps only.

How does this work and how can you tell which UWP Apps can be optimized?

I realize all this can be a little confusing. MUA, SUA, UWP, provisioned, installed, it can become muddled. A basic breakdown of these terms are below. 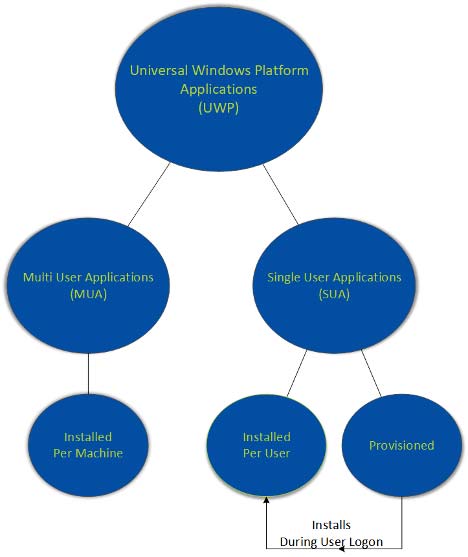 Windows Feature Updates or third-party applications will sometimes add UWP Apps to the set of installed or provisioned applications in your machine, causing the need for you to check periodically for new apps to optimize.

As we saw previously with Active Setup, there are two scenarios to consider when thinking about optimizing Microsoft Store applications: persistent and non-persistent machines.

A non-persistent scenario works differently as SUAs, being provisioned but not installed for each user, install themselves when a new user logs in. Since this installation happens prior to the user seeing the desktop, this installation can cause a first login to take an extremely long time.

How do I prevent UWP Apps from running in my environment?

Provisioned SUA Applications are visible via PowerShell. From an elevated PowerShell, simply run the command Get-AppxProvisionedPackage -Online. The output will show you information about each Provisioned Application. Small example shown below: 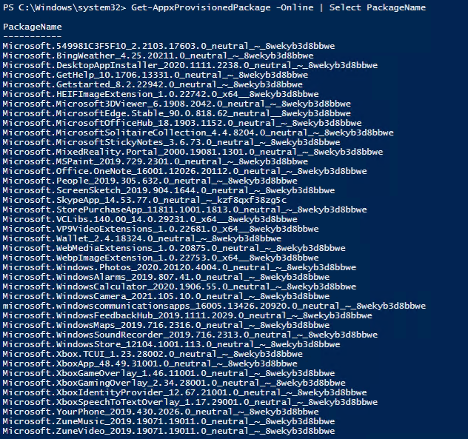 That is a huge number of applications that install on a per-user basis for each login of the user. Your job, should you choose to accept it, is to understand these applications and if they are desired or undesired in your environment.

Now, to remove these provisioned UWP apps, we use a slightly different command. Again, from an elevated PowerShell, you run the command Remove-AppxProvisionedPackage -Online -PackageName “(PackageName of App)”. For this demonstration we are going to pick on the XboxGameOverlay Provisioned App.

So, what does this command actually do? Well, in that hidden and inaccessible folder %ProgramFiles%\WindowsApps that was referenced earlier, the folders that existed for the UWP application are removed.

Now what about the application itself? Well, as you can see, it is no longer listed as a provisioned app as well.

You may be asking, “But what about the current user logged into the machine?”. That is a great question! You see, while the Remove-AppxProvisionedPackage PowerShell command is specific to provisioned UWP apps, it also works for matching applications that are installed UWP apps. Although it will not remove the files from %localappdata%\packages, it will remove the matching line item from the list of Installed Applications.

To view installed UWP applications, the command to run in PowerShell is Get-AppXPackage -AllUsers, although this will return a HUGE number of applications. Your better bet is to run something that returns only the information you need. Get-AppXPackage -All Users | Select Name will return all installed UWP applications, but only show you the names. It is even larger than the list of provisioned apps so I will only give you the list of names that contain the word xbox.

So, as you can see below, running the Remove-AppxProvisionedPackage -Online -PackageName “(PackageName)” will remove the installed application as well.

The corresponding folder for the Installed Apps located at %localappdata%\packages can now safely be deleted via File Explorer.

Now, what about the aforementioned installed apps that are not provisioned apps?

As stated previously, the list of installed apps is even larger than the provisioned apps list. A sample below. 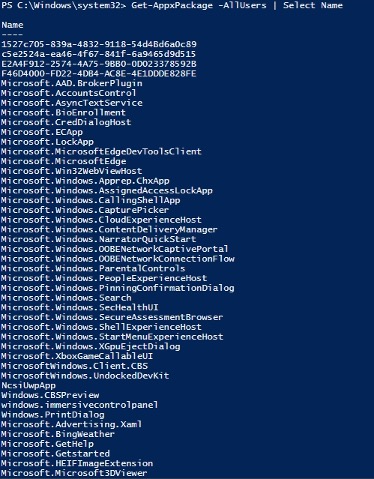 That is about half the list on an unoptimized machine. So, what do we do with these applications?

Well, even more than the Provisioned Apps, it is imperative that you vet these applications carefully. Unlike provisioned apps (other than the Microsoft Store itself), installed apps can sometimes be necessary for the OS to function.

This command will, unfortunately, not provide a visible command output stating the application has been uninstalled. If you are watching closely you might see a progress bar show up, but it’s very quick, as the uninstallation of a single UWP app doesn’t take long.

As with the Remove-AppxProvisionedPackage command, this command will not remove the files located at %localappdata%\packages, but they can be removed manually after the command has been run.

What are the potential downsides to removing UWP Applications?

While the Microsoft Store (called the Windows Store via the PowerShell command output) can be removed as both a provisioned and installed app, getting it back is extremely difficult. It is usually easier, at that point, to rebuild your image. As such, while you will see multiple places tell you to run the PowerShell command Get-AppxProvisionedPackage -Online | Remove-AppsxProvisionedPackage -Online to remove all Provisioned Applications, I do not recommend it for that simple fact.

In addition, if any custom-built UWP applications (either provisioned or installed) are used in your environment, you will remove these as well through the above command. Please vet your UWP applications carefully!

Now, to the section everybody came here to read! Below is my list of provisioned and installed applications that are safe and potentially beneficial to remove in most environments. As always, please vet these applications for your environment before removing them.

You can obviously script out the entire process to remove these UWP apps on a line-by-line basis, but why do that?

Using an array as part of your PowerShell command will allow a repeatable process where you can remove all the UWP apps you want in a controlled method.

I have not yet found a way to manually or programmatically remove UWP application icons from the Start Menu.

This post covers the Microsoft Store as it relates to Operating System optimization, but the Microsoft Store can be used by any developer as part of their application deployment. Consequently, we recommend checking all provisioned and installed apps, either periodically or after each application installation, to verify new entries have or have not been added. If they have, vet them for purpose, and then remove or keep them as needed.