How hyperconverged infrastructure takes the complexity out of IT deployment while streamlining operations and business decisions.

Consumerism today is increasingly moving towards a single point of operation, administration, and transaction, even if technology and buyer behavior are constantly changing. Think of the mobile phone. Consumers can do just about anything in their daily routine using this magical device.

Business is no different. The gradual evolution of VDIs, converged systems, and datacenters towards a hyperconverged infrastructure (HCI) has revolutionized the way enterprises operate and do business. The increases in performance, improvements in productivity, and savings in costs are very real. While most of the problems that an HCI solves are related to IT, its implementation has wide-ranging implications across all business functions.

HCI uses software to combine servers and storage into a distributed IT infrastructure, creating flexible building blocks that can eliminate common pain points associated with traditional IT systems that operate with separate servers, storage networks and storage arrays. It has evolved and become more widely used across industries. Over 70% have in production or have a deployment pending, according to Evaluator Group’s “Hyperconverged in the Enterprise 2020” study.

“Where enterprise IT used to ask: ‘Where to deploy HCI?’, they’re now asking: “Where else?”, said Eric Slack, Sr. Analyst at Evaluator Group. “HCI is a go-to infrastructure for companies of all sizes, providing a flexible, agile and powerful solution to consolidate the data center.”

Enterprises are evolving how they use HCI as HCI gets better and proves to be reliable over time. Evaluator Group’s 2020 research study stated that HCI has also become a primary on-premises solution for hybrid cloud infrastructures. The study also showed that databases, typically the most critical applications in the data center, have become the top use case for HCI.

No More Complexities in the IT Infrastructure

Hyperconvergence is the culmination of the cyclical nature of end-user computing. The mainframes of old had dumb terminals connecting to it. that gave way to desktop computers on every desk in the office. Then there were physical, individually managed servers with attached storage in a LAN that were each responsible for a single workload. These servers were later isolated for computing as storage arrays detached from the processors.

Today, many organizations choose a terminal architecture with thin-client devices that run just the interfaces of various applications. An HCI unifies virtualization and storage with software-defined controls so that distributed servers and storage devices can be pooled, used, and managed as if they were a single entity. This allows for hundreds of workloads to run on a single cluster of servers (or nodes), all operated and managed from a “single pane of glass” interface. 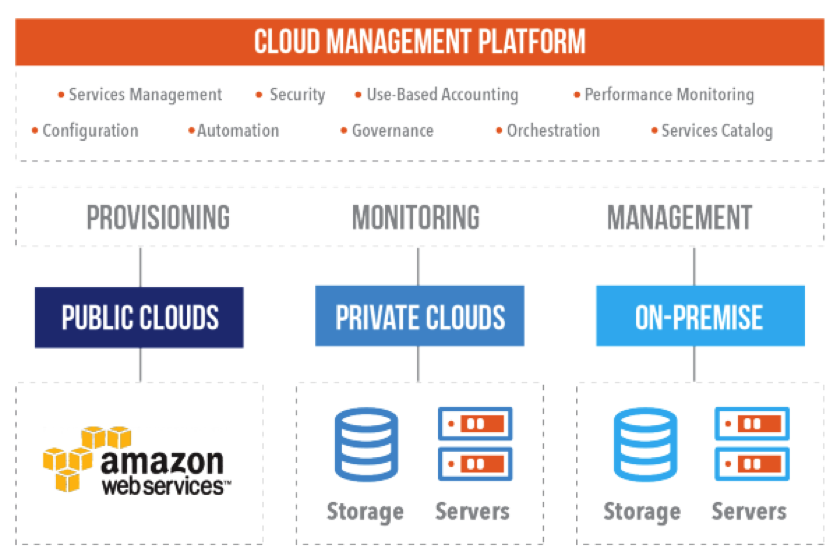 Administration of multiple multi-cloud environments, including on-premise and hybrid cloud configurations and native and remote cloud apps is possible via a unified console, regardless of disparities in underlying systems.

IT environments today are going the hybrid cloud way. Legacy infrastructure is getting increasingly difficult and expensive to maintain and upgrade. An enterprise cloud system running on HCI completely virtualizes physical servers, providing more agility to the organization and reducing risk of failure. This also translates to direct savings in space, power, and cooling (collectively known as the datacenter footprint).

Bicycle gear manufacturer Trek was able to reduce their datacenter footprint by a staggering 75% when they moved from a complex 3-tier infrastructure to HCI. “Our legacy environment filled four racks, and we’re now down to less than half a rack of equipment with Nutanix,” said Dane Sandersen, global security and infrastructure director at Trek.

Hyperconvergence is not just about hardware consolidation. While an HCI has the capability to handle prolonged workload bursts at optimized capacity, scalability is linear – nodes can be added or moved between clusters without disrupting operations, to run new apps and workloads on demand. Adding VMs doesn’t require the addition of new servers or storage, which is again a single, shared resource pool with cloud-like features.

AI-based management software can recommend corrections for resource usage by analyzing surplus and shortage in usage. This means that enterprise datacenters are “right-sized” at all times. The State of the Enterprise Datacenter report revealed that enterprises that have adopted HCI have already achieved or are close to achieving dynamic scalability of their datacenters. 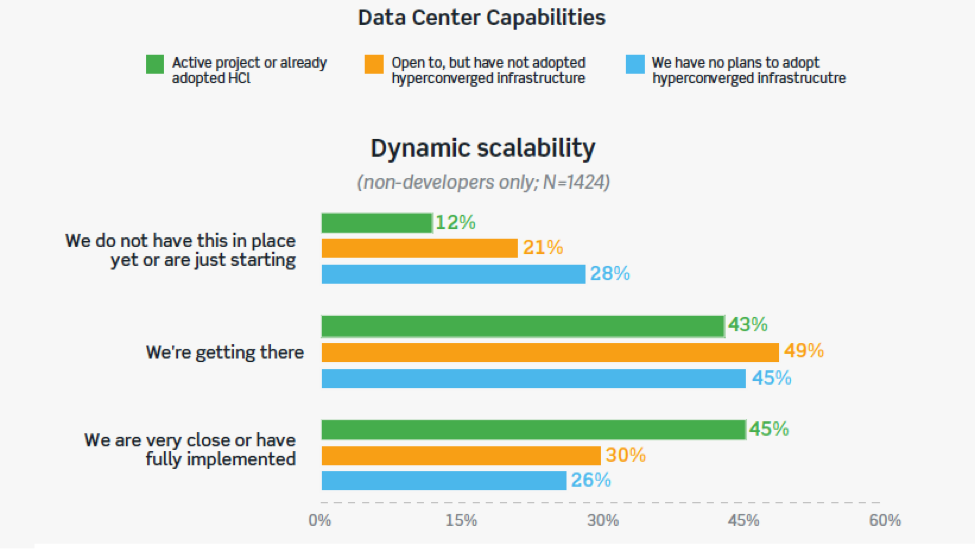 No Risk of Data Loss and Faster Disaster Recovery

In a hyperconverged infrastructure, less servers don’t mean a higher risk from hardware failure. On the contrary, mission-critical applications, and databases can run on virtual servers with higher availability and better failover capabilities than traditional configurations.

Most organizations using a pre-HCI infrastructure don’t have the resources to buy and deploy a fully redundant storage environment. So they simply default to a 3-2-1 configuration, which is 3 hosts linked to 2 switches, coupled with just one SAN or NAS, which is the central pool of all data. This results in a single point of failure for data and applications if there is no redundancy in the storage array. 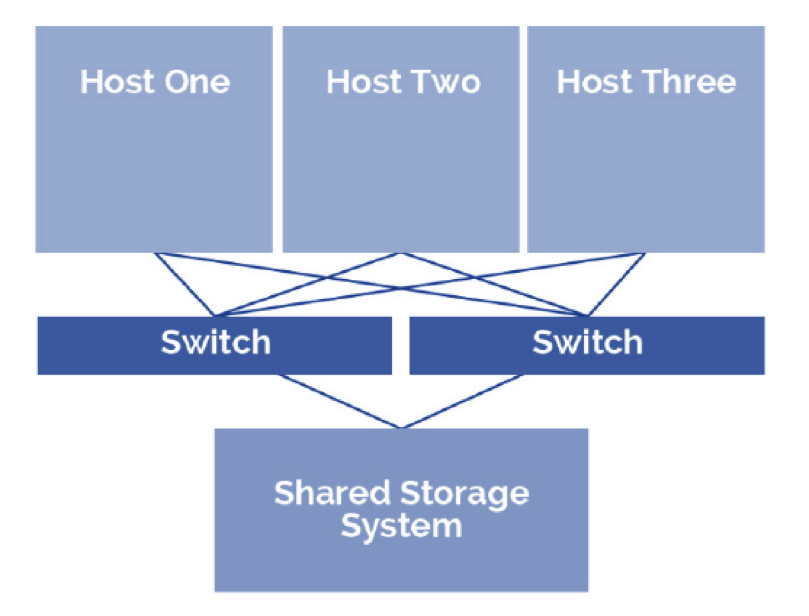 HCI, on the other hand, offers software-defined storage built in. It doesn’t need spare or redundant hardware for separate environments either – losing a disk or even a whole node doesn’t bring down the whole infrastructure. When a physical server fails, all VMs are automatically restarted on another (optimal) node in the cluster without disruption.

Consequently, maintenance is also simpler, faster, and safer. On-demand adding and removing of nodes takes minutes. Specific processing functions or workloads can be migrated to a different node during maintenance, and once updates or patches are completed, processing automatically returns to its earlier state.

HCI is as simple to manage as it is to implement. There is no need for enterprise server, networking, or storage gurus to be on staff. A study by ActualTech Media found that HCI implementation takes IT specialists out of firefighting mode and allows them to focus on innovation and ROI-centered business goals.

Companies that have adopted HCI are seeing a drop in the overtime that management and support staff put in each week. This bit of work-life balance takes specialists out of the constant firefighting mode and opens the opportunity to focus on more proactive initiatives for the business. Three-fourths of staff at companies that have deployed an HCI reported working 40 hours or less a week.

Enterprises engaged in HCI implementation are more likely to see a redistribution in staffing, with an increase in the generalist and data analyst categories. Conversely, specialist jobs in security, database administration, and application development might see cuts or rightsizing, especially in remote locations.

Trek Bikes reduced the number of employees needed to manage their infrastructure by 66%, lowering IT costs and freeing up resources to focus on strategic projects. “Since staff don’t have to spend all of their time fighting fires in the data center, they’re welcome to jump on their bikes and take a nice, hour-long ride during the work day in the fresh air,” said Brian Oamek, their Senior Enterprise IT Architect.

This sentiment was echoed by Steve Elgan, IT Director at Heartland Community Health Network, after they deployed to a Nutanix Enterprise Cloud-based HCI.

“The very first update I did for Nutanix happened with my newborn child in my arms. I had my son in my hands, feeding him his bottle, and I just clicked ‘Upgrade’,” said Elgan.

Businesses of all sizes are catching on to the benefits and are quickly deploying solutions that suit them. When it comes to deployment, HCI is the new cloud. It has brought down the “time to value” – from unboxing the hardware to running virtualized applications – drastically.

For enterprises that are still wary of taking the leap into an HCI, here are answers to the most burning questions about hyperconvergence.

Dipti Parmar is a contributing writer. She writes for major tech and business publications such as CIO.com, CMO.com, Entrepreneur and Inc. magazines. Follow her on Twitter @dipTparmar.