Bring Your Own Azure Network to Frame

As enterprises continue to expand their IT footprint into the public clouds, extending existing private networking infrastructure into the public cloud has become more critical. To address the flexibility that this requires, Nutanix has added a Bring Your Own (BYO) Networking feature to its Frame™ Desktop-as-a-Service (DaaS) solution. In a previous blog, I walked through how to use this feature in the AWS® platform. In this blog, I will walk you through how an environment could be set up in an Azure® cloud infrastructure. Integration between your Frame-managed workloads with an actual private network depends on the specific implementation of your private network.

Figure 1 below illustrates the network architecture of what I created for this blog. 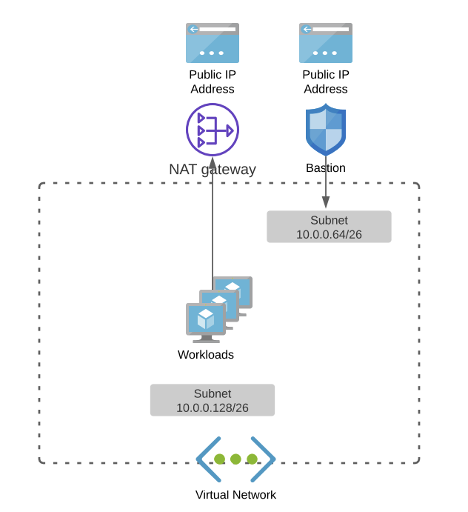 Create a Resource Group and a Virtual Network

An Azure Resource Group is a convenient way to group resources that work together in Azure. In my case, I created one in the South Central US as seen in Figure 2. 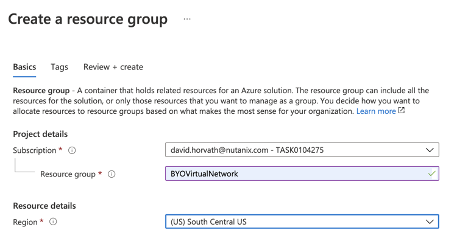 Then you can create a virtual network in that resource group. During that process, you can also create the subnet you will need for the Frame workloads. In Figure 2 above I have one subnet that is a /26 so I created a VNet with a /24 and put that /26 subnet in the VNet. 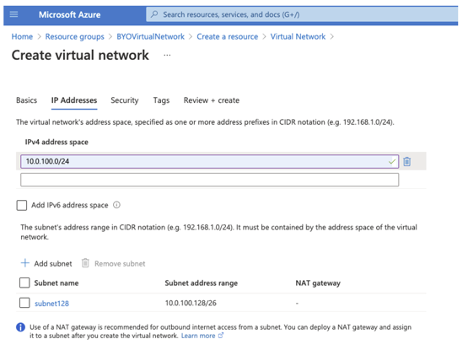 Figure 3. Create a subnet in a Virtual Network

For testing purposes, it is often handy to have a Bastion Host so that you can access the private network. Go to the “Security” tab to enable the Bastion Host and fill out the form. 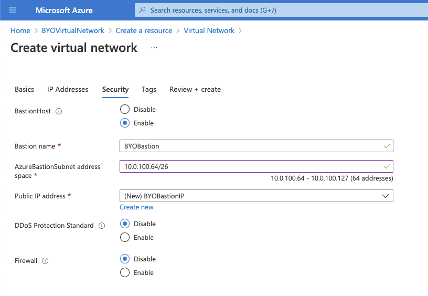 1Frame is transitioning to the Frame Guest Agent 8.0. When this transition is completed for a Frame account, inbound traffic on port 8112 will no longer be required.

Once created, the Network Security group can be added to the workload subnet configuration. 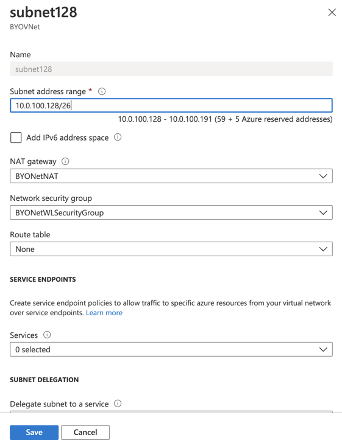 Since I don’t have a private network to connect my Virtual Network to, I will deploy an RDP “jump box” behind the bastion I created so that I can confirm the operation of Frame workloads once they are provisioned in the newly created virtual network. 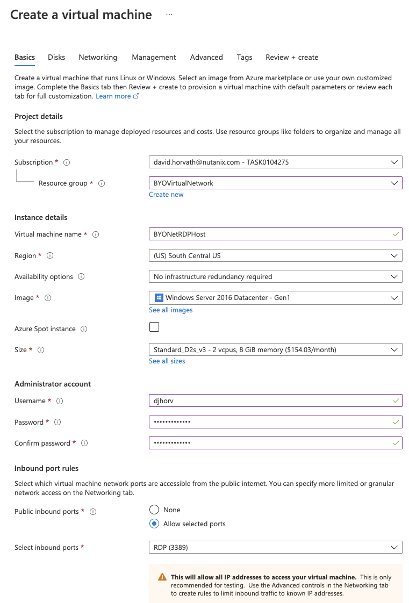 Use the defaults on the Disk Tab. On the networking tab, don’t use a public IP and leave the security with the default values. We will fix it later. 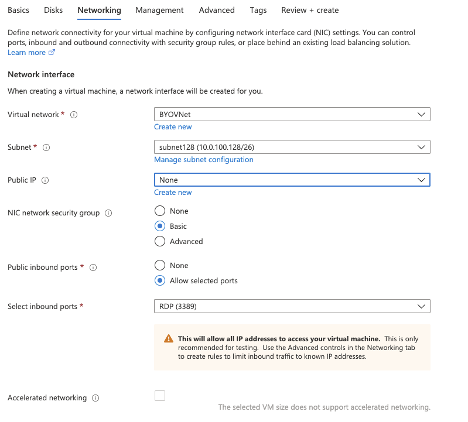 Once the VM is created, go to the networking tab and change the RDP rule so that it will only allow traffic from the private network. 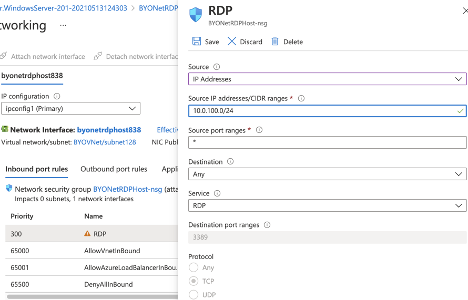 You will need a NAT Gateway to make sure that the Frame Workloads have outbound Internet access. So we will create a NAT Gateway and associate it with the private subnets. 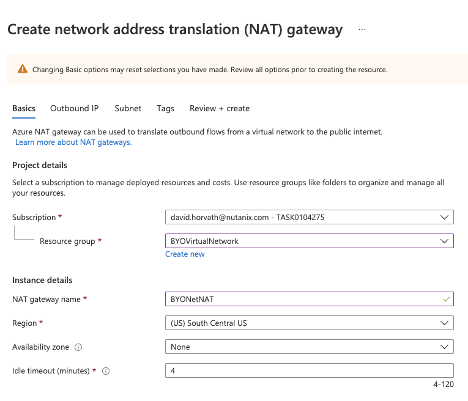 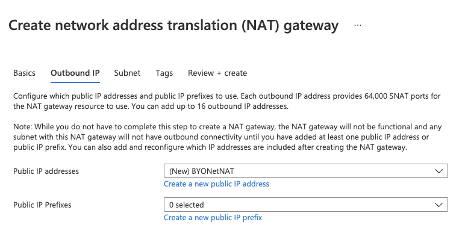 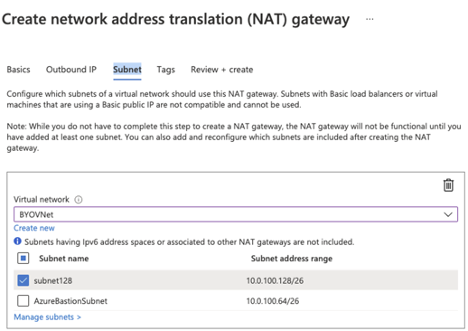 Figure 12. Associated with the Private subnet

With the Azure private networking setup complete, I now have all the information necessary to set up my Frame BYO Networking account. I have already registered my Azure subscription to my Frame Organization entity (as noted above).

In the “Create Account Dialog,” I choose the correct cloud provider (e.g., Azure) and region (e.g., South Central US) and then select the “BYO Networking” radio button, as seen below. 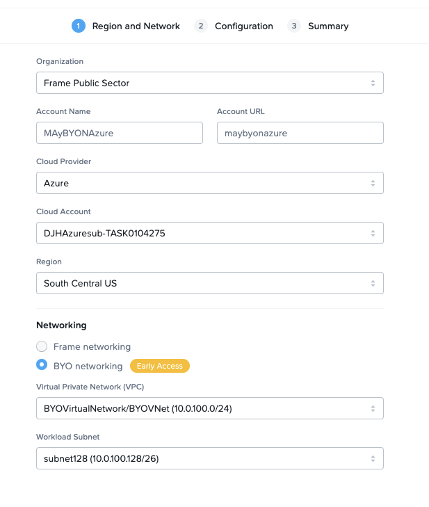 I chose the VirtualNetwork and subnet that I have created and now I can select my sandbox image and instance type and hit Next twice to create my Frame account. 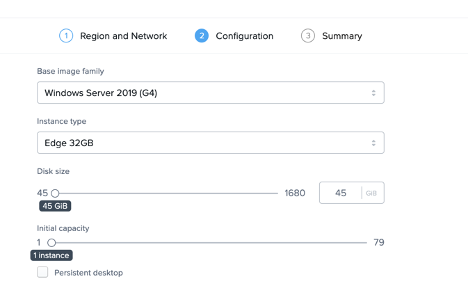 That is it! After a few minutes, my Frame account is created and ready to use. Only machines on the private network can connect to Frame sessions, so RDPing into the Bastion, starting up a browser, and logging into Nutanix Console will be required.

Figure 15. Connect to the RDP host via Bastion

Once you are in the Bastion you can start a session in the sandbox and use the Frame Account as you would normally. 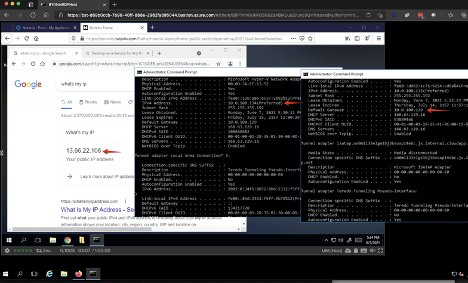 In this blog we showed how you could set up a Bring Your Own Network Frame account in the Azure platform. The workloads of the Frame account will only have IP addresses on your private network and therefore they inherit all the existing network security controls that would be setup on your private network. For external users, connecting in via RDP is probably not the most efficient way to connect. For those users you can either have them connect via an existing VPN solution or through a Frame Streaming Gateway Appliance (SGA).

© 2021 Nutanix, Inc. All rights reserved. Nutanix, the Nutanix logo and all Nutanix products, feature names mentioned herein are registered trademarks or trademarks of Nutanix, Inc. in the United States and other countries. All other brand names mentioned herein are for identification purposes only and may be the trademarks of their respective holder(s). This post may contain links to external websites that are not part of Nutanix.com. Nutanix does not control these sites and disclaims all responsibility for the content or accuracy of any external site.