A growing number of practical uses for AR shows the technology is already transforming businesses across different industries.

Because it’s the engine that morphs Snapchat selfies into absurd personal statements, almost every high school student in the United States has firsthand experience with augmented reality (AR), the interactive technology that merges the physical and digital worlds. Members of the slightly older millennial cohort, meanwhile, might remember AR as the driving force behind Nintendo’s globally-hyped smartphone game Pokémon Go, which shattered mobile gaming records when it debuted in 2016.

But AR isn’t just fun and games. In 2017, Harvard Business Reviews explained Why Every Organization Needs an Augmented Reality Strategy. In the last five years, the technology has evolved rapidly, opening transformative opportunities for education, healthcare, manufacturing and other industries. AR is expected to be a $72.7 billion business by 2024, according to Markets and Markets.

“AR will allow for high-quality worldwide education and remote collaboration without the restrictions of geography,” said Danny Goel, CEO of PrecisionOS, which builds technology tools for the healthcare industry.

“We are only in the early stages of realizing the full potential of AR.”

Unlike virtual reality (VR), which is entirely digital, AR’s strength comes from mixing the virtual world with the real one. Using the physical realm as an asset, AR helps bring things to life in creative and innovative ways by superimposing digital information, objects and tools over people’s field of vision. This makes it attractive not only for gaming, but also for employee training and collaboration, which AR can transform into an extremely robust and immersive experience.

“We decided to do this because we saw how effective these tools can be in learning,” said Emily Cooper, a creative producer at SweetRush, which builds AR solutions for Fortune100 clients. 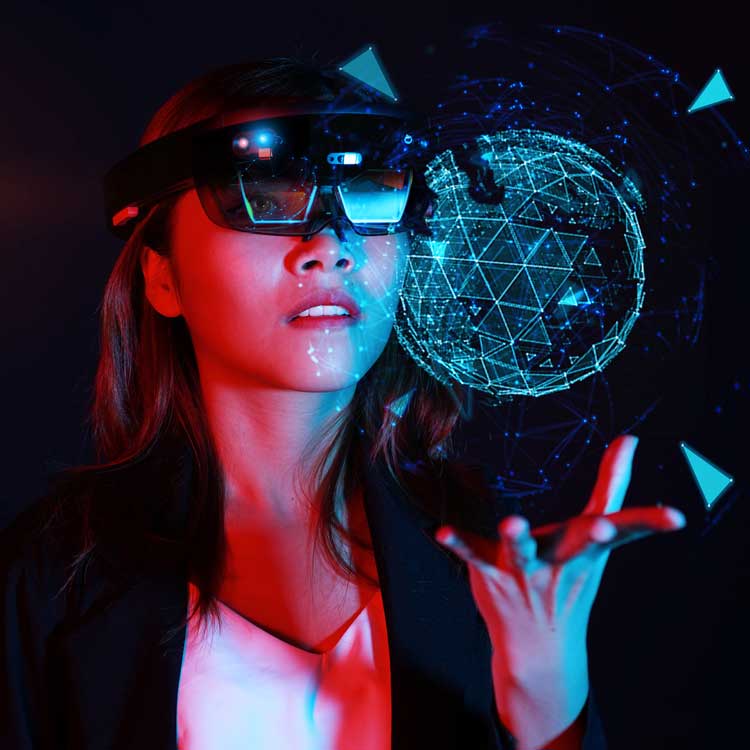 Augmented reality in business can be a more efficient and cost-effective method of facilitating teamwork and instruction than meeting in person. This has become especially apparent during the global pandemic, which has accelerated AR’s growth by necessitating remote working.

“Pre-COVID, the model of learning was to travel to places and spend a significant amount of money to teach,” Goel said.

With augmented reality, companies can save time while also reducing their environmental impact—a major benefit to employees and customers who increasingly value sustainability, according to Adrian Soto, SweetRush’s director of immersive technologies.

“The wow factor obviously captures more of your attention, and there’s more immersion. It’s a lot easier to present complex information in a way that’s easy for the learner to absorb. It makes training more effective in terms of engagement, retainment and enjoyment.”

The “wow” factor isn’t just anecdotal; it’s also empirical, according to the International Journal of Environmental and Science Education, which in 2016 analyzed 15 different studies of AR, all of which demonstrated AR’s positive effects on learning.

“AR/VR is one of the fastest-growing training tools,” said Duane Brozek, director of external communications at Conduent, which builds AR tools for companies. “It provides a safe, repeatable training scenario for any environment.”

In these and countless other organizations, AR’s genius is that it allows employees to practice by doing. But AR also can connect workers to real-time support from remote colleagues, allowing them to work alone without actually being alone.

In healthcare, applications like AccuVein help nurses find a patient’s vein so they can draw blood more easily. That can be particularly useful for medical and nursing students who are still learning; by turning 2D objects in a textbook into realistic 3D representations, AR in business can dramatically enhance traditional education.

“The current use case for AR is visualization of a patient’s pathology during an actual procedure,” said Goel, whose company, PrecisionOS, uses immersive technology to train surgeons and assist them in the operating room. “You’re reviewing a CT scan or an X-ray in augmented reality during a patient procedure. It can also be used to overlay anatomical regions within the body on the surface of the skin. Augmented reality gives you a very stepwise progression through a procedure or repair or maintenance in high-risk scenarios.”

As with most emerging technologies, AR harnesses the power of the cloud for easier access to software and tools. That’s what makes AR affordable not only for established companies like Boeing and Mercedes Benz, but also for cash-strapped entities like hospitals and governments.

“With the cloud, it’s downloaded on-demand,” Soto said. “If you’re looking for that immediate use, it’s a lot more scalable.”

It can even be paired with artificial intelligence (AI) for added benefits.

As COVID-19 turned bustling office buildings into ghost towns and made social distancing a safety imperative in workplaces the world over, AR began to hit its stride.

“I believe that there was a trend that was happening where we were seeing the effectiveness of AR/XR in development and training, and I think COVID acted as a catalyst to push that adoption into high gear,” Cooper said.

In the absence of face-to-face interactions, companies have migrated to platforms like Zoom so they can continue to tend to business. But as the health crisis rages on to its second year, corporations are starting to look for additional tools.

“I would say there’s an element of Zoom fatigue, and immersive technologies are allowing them to augment their current experience,” Goel said.

AR leans heavily on cloud computing to help change people’s perspectives of the world around them.

“I would envision a world at some point where we stop having handheld devices and we all use glasses or a similar device that will integrate AR into everything we do,” Brozek said.

That makes it an impactful medium not only for everyday users, but also for forward-thinking companies that are interested in collaboration and training solutions that affect their bottom line.

And that isn’t child’s play.