Trendspotter Jeremiah Owyang sees technology disrupting the health and wellness industry with a force compounded by previous waves of innovation.

Amidst the rising worry about tech becoming a serious detriment to people’s health, Jeremiah Owyang is watching an unstoppable confluence of innovation that could forever change the way people take care of themselves. After talking with over 50 startups and established companies, he and his research team realized there’s a global Modern Wellbeing market growing well beyond the healthcare industry and consumer trends like quantified-self movement of health tracking wearable tech.

For nearly two decades Owyang has spotted trends and helped companies connect with customers using web technologies. The industry analyst at Kaleido Insights and founder of Crowd Companies gave businesses clarity in the early days of the social media industry and the sharing/collaborative economy. Now he’s tracking the rise of a $4.2 trillion market, where technology and human wellness intersect. 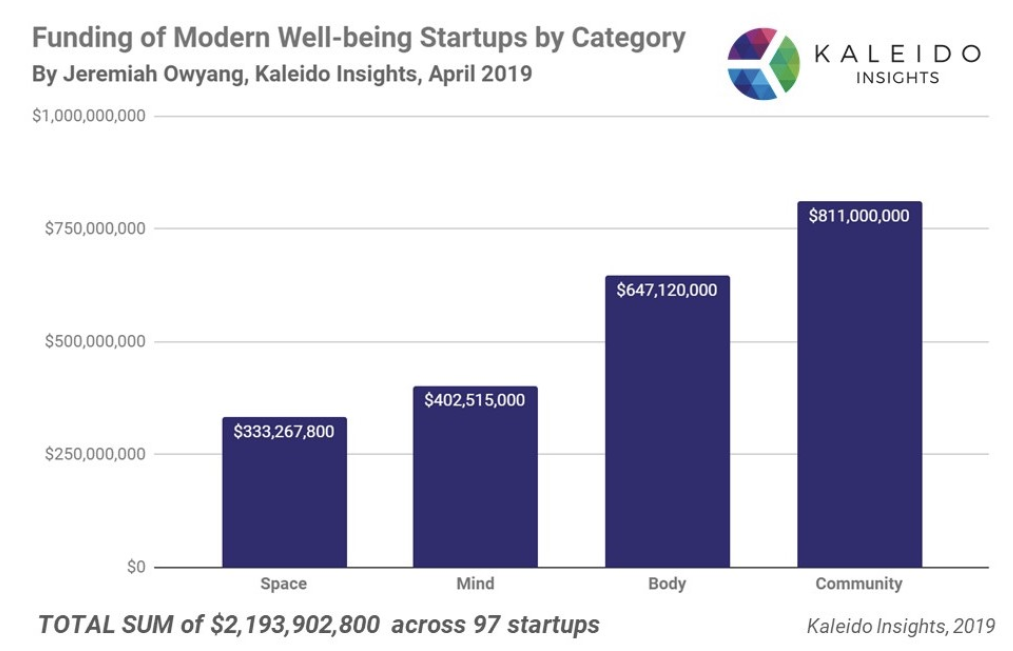 He and his Kaleido colleagues began reporting on the impact of Modern Wellbeing in late 2018. Since then, they have built a database of research documenting the growth and impact of this market.

“Our society has taken a turn and people are more focused on their physical, mental and spiritual health than ever before,” he said. “Being happy and healthy has evolved into a top priority for people and it’s becoming a big business.”

The irony doesn’t escape him, but he sees promise in the way companies are turning to technologies that help employees cope with overuse of on-the-job technologies like email, Slack chats and videoconferencing.

“Some companies are using on-demand services for mindfulness, meditation and diet,” he said.

Like any other big industry, he knows health and wellness is ripe for technological disruption. Investment in startups and technology-powered services aimed at mind, fitness, sleep, diet, reproductive and other health needs recently exceeded $2B as of March 2019, according to the 97 companies Owyang tracks.

Rising healthcare costs and the rise of new technologies are driving people to manage their physical, mental and spiritual health in new ways.

He anticipates business acquisitions to spark the creation of super apps and comprehensive wellness platforms that address mind, body, community and space.

“Google and Apple are likely contenders in this arena, but there’s certainly room for independent startups,” he said.

He believes sports brands like Nike, Under Armour and Reebok could also play a big role, but many industries will get involved over time.

Owyang reaches beyond the tech space to understand how the past, current and future digital innovations will impact the future of health and wellness. Behind the emerging modern wellness movement, he mapped out four previous waves of innovation: the internet era of 1990-2000, the social media era, collaborative economy era born in 2008, and the current autonomous world era. 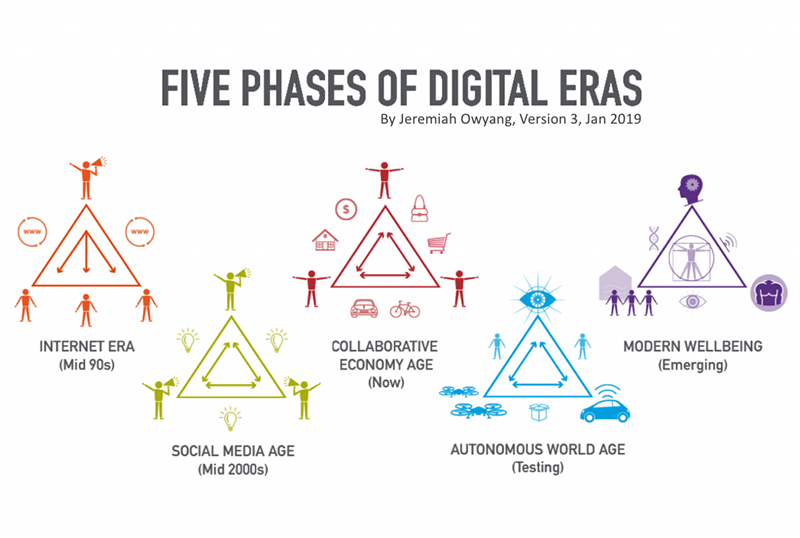 These waves show how more aspects of society are being digitized, and Owyang believes this will continue at an increasing pace. Each wave of innovation intertwines with prior phases, driving technology’s impact on our lives from more angles and raising new concerns along the way.

“Apple, Google and anyone else launching a wellness product will know more about us than our doctors,” he said. “They could predict a future ailment that we can't see. Are we ready to trust them as much as our doctor?”

He said society acclimated to the internet and nearly figured out social media. He believes the collaborative economy will continue to expand and reshape the notion of asset ownership.

“Companies that have assets are forced to find services in order to survive,” he said.

He also believes we’re in the early days of an autonomous world, with self-driving cars, robotic manufacturing and commercial drones. But the era of tech-powered well-being is still a little seed about to sprout like a giant bean stock.

Looking Back to Move Ahead

He cautions that not everything about technology disruption turns out so well. There are bumps in the road and adjustments must be made for safety or privacy reasons.

“Fifteen years ago, many thought social media would make governments and companies more transparent,” he said. “Most didn’t know Facebook was selling our data, allowing it to be used for nefarious purposes.”

Owyang admits to being overly optimistic at the dawn of social media, but he believes the widely shared optimism drove experimentation and tested new boundaries. While this opened many new opportunities and fueled an enormous economy, it also intensified privacy and safety concerns.

Successful internet companies like Netflix and Google are the foundation for future changemakers, but Owyang said not every forerunner is destined to lead new waves of innovation. To stay relevant, he believes today’s leaders must nurture their culture and create agile business models. 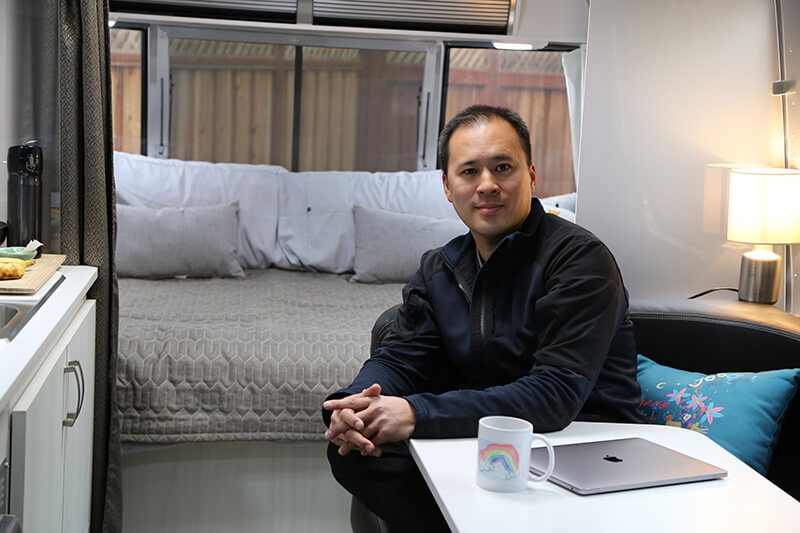 He said whichever company controls people’s data has the power. That’s why organizations like Apple harvest body and mind data from smartphone apps. He pointed to the Apple Health app and its open fields for input of nearly every type of body data: sleep, nutrition, fitness, heart rate, and beyond. Once this data is harnessed and analyzed, powerful artificial intelligence companies can predict what humans will do. Owyang sees this as the most powerful dataset in history.

“These autonomous technologies will continue to creep into our lives, businesses and society, indistinguishable from most human services,” he said.

Technology Gets Inside Human Health

Since the early Fitbit emerged in 2007, hundreds of wearable devices have attracted mainstream attention. These consumer technologies can help people monitor and improve their lives. At the same time, Owyang said the concerns around data privacy and over-reliance on technology can’t be ignored.

“Apple has a ton of data on my heart,” he said, pointing to his wrist. “The Apple Watch apparently has these galvanic scanner response measurements, even if they haven’t turned them on or alerted the public. We don’t know what data is actually being collected from it.”

Owyang is well aware of growing human and social concerns of being “always on” and connected to the internet, but still thinks technologies will eventually integrate with our bodies. That’s why he advocates for deeper, broader understanding of how digital technologies affect well-being.

Ken Kaplan is Editor in Chief of The Forecast by Nutanix. Find him on Twitter @kenekaplan. Jillian Richardson contributed to this story.