Manufacturers Rank Near the Top of Cloud Adopters

Plans to double usage within 2 years could help them circumvent innovation impasse.

Manufacturing companies are deploying public and hybrid clouds at a faster clip than other industries, according to recent research conducted by Vanson Bourne for Nutanix.

Their aggressive adoption of cloud, particularly public cloud services, suggests that manufacturers are turning to modern technology to stave off what’s often called “innovation impasse,” which can result from an overreliance on legacy systems.

The distributed computing model afforded by cloud technology “delivers the speed, flexibility and localization manufacturers need to improve efficiency without compromising quality,” according to the research firm.

Manufacturing’s bullishness with cloud technology was a key finding of Nutanix’s Enterprise Cloud Index 2018, a survey of a broad cross-section of enterprises worldwide. To create the ECI 2018 report, Vanson Bourne interviewed 2300 IT decision makers about their cloud deployment plans and challenges and how their cloud initiatives stack up against other IT projects and priorities.

ECI 2018 found that more manufacturing companies reported using a single public cloud service (20%) than any other industry, substantially surpassing the global average of 14%. And while fewer manufacturers reported currently using multiple public cloud services (9.5% compared to the global average of 12%), they also reported plans to double their multicloud usage to 19% penetration within two years. That would put them one percentage point ahead of the expected average global multicloud penetration in that time frame.

Nearly all ECI respondents (91%) across industries and geographies cited hybrid cloud—a mix of private and public clouds with some integration among them—as the ideal IT model, though just 18.5% said they’d deployed it. Limited application mobility and incomplete integration across clouds are likely behind the disparity. Nearly all respondents said they would like to see improvements in these areas for greater flexibility in matching applications to the most appropriate infrastructure.

“App mobility absolutely is something we need, but first we need to build a public cloud that also can run your legacy applications,” said Rajiv Mirani, Nutanix CTO of cloud platforms. “That's when real hybrid cloud becomes possible.”

Specifically, having interoperability among public and private clouds appeared most often as the number one benefit drawing businesses to hybrid cloud computing by all respondents, including the manufacturing sector. Nearly a quarter of companies (23%) selected that factor as the top benefit, and manufacturers selected it as the top benefit moderately more often than average (27%).

In addition, 61% of all companies and more than half (55%) of manufacturers said that application mobility among clouds is “essential” going forward. All companies cited security and a scarcity of hybrid cloud skillsets as chief among their challenges to achieving this goal. 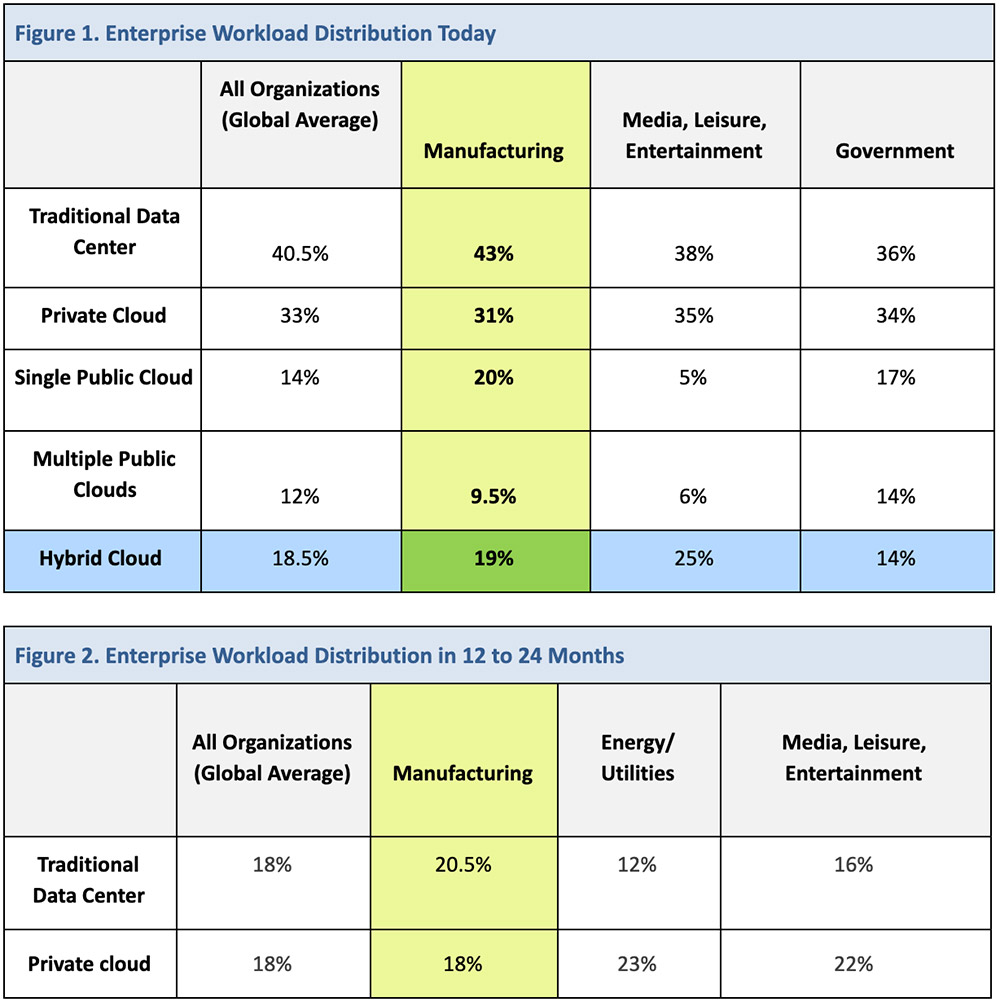 IT/technology/telecoms organizations, construction and property companies, and the energy/utilities industry reported far higher levels of public cloud overspending, ranging from 40% to 46% over budget. The industry most successful at controlling its public cloud spend was the media, leisure and entertainment (MLE) sector (26% over budget).

Three industries—retail and government, in addition to MLE—are doing better at managing their public cloud spend than manufacturing organizations, while seven industries are doing a poorer job.

Hybrid cloud capabilities constitute a growing necessity in the digital business climate, according to Mirani.

“Increasingly, enterprises will demand the freedom to dynamically provision and manage applications in the location that best fits their needs of the moment,” Mirani said.

“Applications evolve. Today, it may be cheaper to run something in the public cloud. Two years from now, as utilization grows, it may make more sense to run the same thing in your private datacenter,” he said.

Being able to move things back and forth accordingly is the end goal, he said, to avoid enterprises being “locked into a deployment decision” very early in the process of deploying an application.

Photo by Lenny Kuhne on Unsplash