It’s an exciting day for Nutanix, one that marks a significant milestone in the company’s journey to disrupt the traditional enterprise IT market. Today, we announced the fourth major release of the Nutanix Operating System, the intelligent software powering the Nutanix Virtual Computing Platform. Nutanix OS 4.0, or NOS 4.0 for short, is packed with new capabilities and significant enhancements to existing functionality that together make the platform faster, more resilient, and significantly easier to manage and operate. You can read more about the innovations in this release HERE. In the coming weeks, we will have blog posts that cover new NOS 4.0 capabilities in great technical depth.

This release is big one for the company in a couple of ways. For one,  the innovations in NOS 4.0 address the needs of our growing enterprise customer base and speak to the maturity of the platform. The Nutanix Virtual Computing Platform has been deployed in production environments by hundreds of customers for over two years now. We have moved beyond developing basic functionality on the platform to achieve parity with the established players, and are now innovating on features that bring consumer-like usability and rich automation to the platform. This release also furthers the commitment of the company to deliver web-scale infrastructure as a turnkey solution to virtualized datacenters without compromising enterprise-class functionality or requiring a radical overhaul of the environment. This is important, because our ability to bring the benefits of web-scale infrastructure to enterprise customers really sets us apart in the industry. In this post, I’m going to talk about web-scale infrastructure, specifically what it is and why it matters to enterprises. 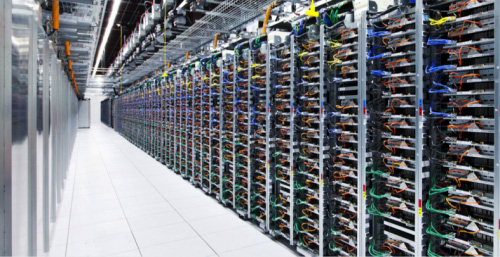 Special purpose appliances are out. Software is in.

Web-scale IT and the Growing Challenges in Enterprises

Enterprise IT today is faced with unprecedented challenges, many of which arise from the popularity of public cloud providers (e.g. Amazon and Rackspace) who have raised the bar for ease of use and rapid self-service. Enterprise IT users are no longer satisfied with the slow pace of traditional IT. For example, they are not willing to wait days or weeks to get a storage volume when they can get a protected IOPS-guaranteed volume from Amazon in a couple of minutes, despite security and long-term cost implications. Enterprise IT is fighting for relevance in the face of the challenge from public clouds, and traditional approaches are failing them. 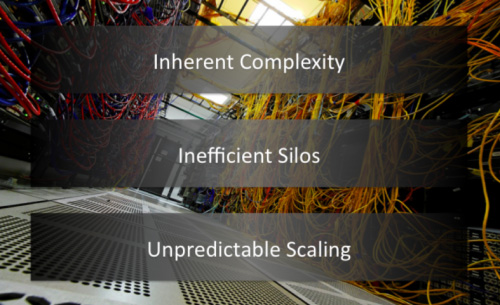 Traditional IT needs a makeover

Web-scale IT is a new approach to deploy, manage and support IT systems that was pioneered in web companies such as Facebook, Google and Netflix a few years ago. It emerged in response to requirements that couldn’t be satisfied with traditional enterprise IT and practices. At its core, web-scale IT is about making every aspect of the infrastructure lifecycle simple, from buying and deploying to managing and scaling resources.

In order to do this, web companies reject traditional architectures and technologies in favor of a new approach. For example, they adopt a highly distributed scale-out architecture based on commodity hardware and intelligent software. The use of small, uniform building blocks removes silos and eliminates the guesswork in scaling infrastructure, allowing data centers to grow incrementally as and when needed. Web companies have built a number of software tools and frameworks such as NoSQL databases and MapReduce that allow these distributed systems to scale rapidly without limits. Systems are designed to survive component failures without loss of data or service.  Convergence of compute and storage eliminates storage network complexity and simplifies operations. Rolling upgrades are the norm so that the entire system never needs to be taken down at any time.

In addition to these changes in the underlying technology, web-scale IT encompasses a big shift in data center operations. IT environments are built around agility and iterative development, and time to market is a key success measure.  Organizational boundaries disappear. Extensive automation is used to minimize slow, error-prone, manual intervention. All of IT is run as a feedback-based control system with monitoring and iterative improvements in process. The net result of this fundamental shift is an IT environment that can be scaled rapidly when needed, is able to meet aggressive business needs for agility, and results in lower costs to deploy and manage.

Web-scale IT today is custom-fit for applications and the business needs of companies. Enterprise customers are looking for solutions that incorporate the core tenets and technologies of web-scale IT but can be used as general-purpose computing platforms for their existing applications. They want the benefits that web-scale IT offers but are wary about undertaking a fundamental transformation of their environments across people, process and technology dimensions. This is where Nutanix comes in.

Nutanix: Web-Scale Infrastructure for the Enterprise

Nutanix brings the power and simplicity of web-scale capabilities to the mainstream enterprise. Nutanix has built a solution that embodies the infrastructure strategy and system design of web-scale IT but is targeted towards a general production IT environment and common workloads, including VDI, e-mail and databases. Enterprise customers can now enjoy the benefits of web-scale IT without having to risk wholesale change. The Nutanix Virtual Computing Platform is a scale-out cluster of high-performance nodes that converge compute and storage into a single system, eliminating the need for traditional storage arrays. Customers can start small and scale their infrastructure elastically as and when needed without having to plan in advance. Each node runs any standard hypervisor (ESXi, Hyper-V, KVM) and contains processors, memory, flash and spinning disk storage. All hardware in the system is commodity, while the real work happens in the software. 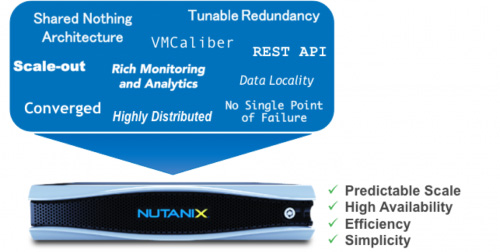 Under the hood, Nutanix leverages powerful technologies that were developed by web companies for use in distributed, scalable environments. For example, the Nutanix Distributed File System (NDFS) uses the Cassandra database to manage metadata across all the nodes in the cluster, and maintains strict consistency across the cluster using the Paxos algorithm. The system stores cluster configuration across multiple nodes using Apache Zookeeper. These approaches make the system highly resilient to node failures. Even storage capabilities such as deduplication and compression have been parallelized across the entire cluster using a MapReduce framework. This minimizes the overhead of these traditionally heavyweight operations and allows administrators to get the benefits of deduplication and compression without having to schedule them during off-peak hours. Features such as Tunable Redundancy allow administrators to dynamically set redundancy levels for different applications in their cluster at runtime.

Nutanix offers a rich programmatic REST-based interface to manage the cluster. The user-centered intuitive GUI that administrators can use to manage the cluster is built on the REST API. Nutanix allows enterprise customers to realize the benefits of web-scale IT without having to build and support the systems themselves.

Nutanix OS 4.0 is a big step forward in delivering the benefits of web-scale infrastructure for enterprise customers. I encourage you to learn more about the Virtual Computing Platform, the features and capabilities of the Nutanix solution and about new features in NOS 4.0. Also join us for a webinar and find out how Nutanix web-scale infrastructure solutions can help you meet your biggest challenges of speed, scale and cost.