Bursting with Pride – The Nutanix and BEarena Partnership

A few recent events have driven me to start a blog. BEarena is growing, increasingly my time is spent planning the next move of the Company, analysing industry trends, preparing us for the next quantum leap. The tools that have served me so well in my technical career were hung up long ago now, and a new generation of technical experts now deliver the BEarena difference equally as efficiently and accurately as I did, so that side of the business is in good hands.

My focus has for the past two years been firmly on developing technology. Australia is a wonderful market for datacentre technology, we’re the most virtualised geography in the world, and yet the amount of innovation that occurs locally is relatively small, and confined to pockets of genius that exist here and there in forward thinking organisations. The sheer number of companies that “rinse and repeat” when it comes to infrastructure always astounds me. The adventurous may change from an EMC to a NetApp, but there the deviation from status quo ends. In some cases, the decision is purely commercial, nothing to do with technology at all. That is why it is so refreshing to meet IT Managers, CIOs, architects who are forward thinking, and are trying to make a change today to better their business tomorrow. I’ve been fortunate to have met a number in the last 24 months, and I think it’s a battle we’re beginning to win.

In August 2012 I ventured to VMworld, on the back of a stellar year with BEarena where not only did we win Veeam Partner of the Year for ANZ overall, but Veeam also funded a trip to SFO for the event. Veeam have been fantastic supporters of BEarena since 2009, and it is truly a privilege to work with such a team, and a product. So, I traveled to the U.S keen to hear from vendors there, and with a few specific targets in mind also. At this point, I had not heard of a Company called Nutanix. It was a friend of mine, Mohammad Jamal who came to me there and said, you must come talk to Nutanix. I went to the stand, and where at all the other stands we got lynched by booth girls keen to scan before they even knew who we were, I stood there for 5 minutes trying to catch someones attention. All the people there were engaged in conversations with customers, I tried to listen in to see what the buzz was. Eventually I managed to get someone who was free and asked “Well, tell me, what is Nutanix?”. I won’t tell you the answer as it’s almost impossible to tell someone what Nutanix is in one sentence. I did however walk away thinking it was a completely different concept, how different I was to find out over the course of the next 24 months…

Fast forward to today. A wealth of joint BEarena and Nutanix customers, some that have gone public such as Sanity Music, Muffin Break, Pearson, Transgrid, Hyundai, some which will do so shortly. Just as our partnership with Veeam transformed our business, so again has it transformed with Nutanix. We were awarded Nutanix Elite Partner status late last year. Due to our success with Nutanix in the VDI space, we were also fortunate to be granted End User Computing Focus Partner status with VMware, again a further transformation. Our partnership with VMware goes from strength to strength, witnessed by our Horizon 6 launch event in June with over 100 subscriptions and 80 attendees, a record I am told for an event of this kind. Most recently, Darryl Crossley who runs the technical team has been promoted to the ranks of VMware vChampion, another BEarena first, and again an example of the truly fantastic support we get from our colleagues down the road at VMware.

The culmination of all of these events occurred last week, at the Nutanix Now APAC Partner conference in Phuket, Thailand. Not only did we receive an (unexpected) mention from Dheeraj Pandey (Founder and CEO of Nutanix) in the keynote (which pretty much set the tone for the event), but we also won two awards. 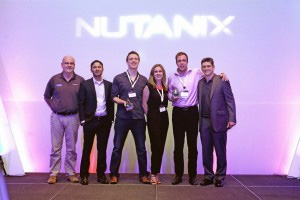 Momentum Partner of the Year for ANZ, and I personally collected Nutanix NVP for ANZ (Nutanix Valuable Player). These two awards mean an incredible amount to me. Not because of the success it reflects in terms of our results, but the success of the relationship. BEarena engaged Nutanix early, VERY early. Nutanix had zero people in region when we started. We sold our first units with Sudheesh Nair (Global VP of Sales) on the phone, the other side of the world, on 3 hours sleep between negotiations. Everything Sudheesh promised to us then, when Nutanix were around 100 people, everything, he has kept his word on and delivered. Imagine that? How easy would it be for a company of such a young age, with such a journey ahead of them, to conveniently forget a commitment made on the back of a small first sale. I remember Sudheesh stressing to me in those first calls, back us, and we will back you. That was a message repeated, this time by Paul Serrano (APAC Marketing), Howard Ting (Global VP Marketing), Matt Young (VP APAC) Sudheesh himself at the partner conference last week, to a much larger audience! There were so many things mentioned last week in the presentations, so many moments where I nodded my head, but I’ve been on the journey already, I have lived it, and enjoyed it. The journey is what I have taken the most satisfaction from, the early events when we had only the NX-2000, the sheer speed and agility of Nutanix, the calibre of the people I have met. All of this is part of the reason why when I took to the stage to make my presentation at the event that for once my emotions somewhat got the better of me, a lump appeared in my throat, and my normal self-assured presentation manner eluded me. Still, I managed to work through it, pretty much until the end…. In Dheeraj’s keynote, right before our mention, he said a reseller he met in Japan was “Bursting with pride” telling him about a relationship he had in the early days with Cisco. I nodded, thinking that’s how I feel about Nutanix. When Sudheesh asked me a question at the end of my session, the same pride burst through as I answered, and then had the pleasure to tell him that since his presentation earlier in the day we had received orders from two new BEarena and Nutanix customers. That pride is what Nutanix means to me… 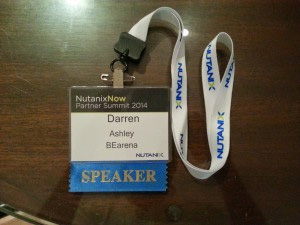 For more by Darren Ashley: