Meaningful and Real-Time Insights for your Workloads

While creating enterprise clouds and infrastructure that are invisible and easy to manage is a core focus at Nutanix, it does not mean that there is any compromise in informing users with useful data. The focus has always been centered on providing data based on applications and virtual machines rather than higher level constructs.

At our .NEXT On-Tour event in Denver, we are pleased to announce that, as part of the planned Asterix software release, we are planning to expand our VM-based metrics. Once released, an additional tab is planned to be added to the VM management view that will report these new data points for each virtual machine. An example what this feature would look like can be seen in Figure 1 below. 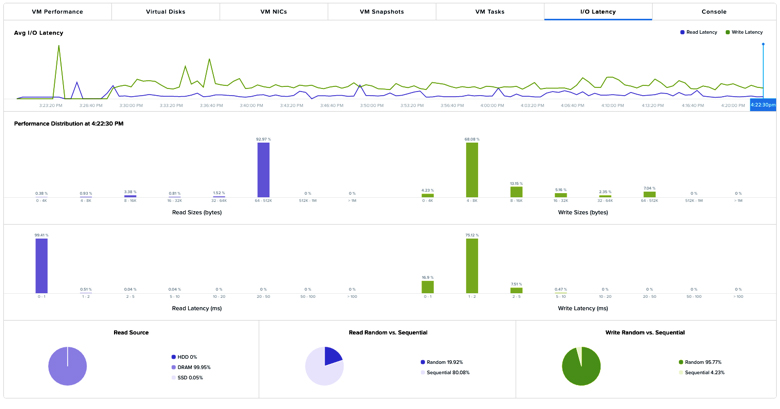 The new data points being added to the VM level metrics are focused on I/O statistics and patterns. These data points have historically been very difficult to uncover in a majority of infrastructure deployments. Being able to determine the I/O behavior and pattern is incredibly helpful when sizing workloads, scaling workloads, or troubleshooting possible issues.

The first of these new data points to dig a little deeper into is the I/O block size for the application and virtual machine. The operating system within a VM will have a default block size that you would expect to see. But applications do not necessarily use the same default block size that the OS has configured on its file system, and can often use block sizes that vary during usage based on the workload. For these reasons, it is beneficial to understand what your I/O sizes are for both read and write traffic. There will be separate charts for read and write block sizes with an example of the read block size shown in Figure 2 below.

Beyond the typical latency chart, which is also provided, these planned I/O reporting features will include charts that will show latency breakdown by groups. There will be separate charts for reads vs writes and they will report the percentage of latency for each range. This helps to quickly pinpoint which value was most prevalent for the time window. An example of the write latency chart is shown in Figure 3 below.

Within most storage platforms today, whether they are hybrid or all-flash, there are still different tiers of caching or capacity. In the Asterix release, we anticipate that Prism will offer the ability to see what the read source is on a per-VM basis, a capability far beyond the common cache hit metrics that have been available on legacy solutions. This chart will show the percentage of reads that come from the different tiers within the platform. A sample of the chart is shown in Figure 4 below.

The last set of charts of note to cover in this announcement is the type of I/O that the VM and application are generating. Previous charts focused on the latency and block size, while these charts break down random vs sequential I/O traffic. As an example, the pair of charts in Figure 5 below show the percentage of traffic type for reads vs writes.

In closing, we constantly strive to provide the deepest level of insight into your applications and virtual machines and think that these additional planned I/O data points will help organizations better understand their environments.