The .Next 2016 Keynote Demo: Virtual and Physical Workloads on AHV

What is the next step in the enterprise cloud? It’s the ability to run all your workloads, virtual and physical, on the same easy-to-manage, secure, and high performance infrastructure. This is exactly what we demonstrated during the keynote at the Nutanix .Next 2016 conference. We showed that a true enterprise cloud can run large bare metal enterprise applications alongside VDI and server virtualization apps, simply and efficiently, without a hitch. And we did it all on a single four node cluster running Nutanix AHV, which includes two powerful new features, Acropolis Block Services and Acropolis Files Services. There were no smoke and mirrors. We demoed real-world workloads on a live system based entirely on hardware and software that will be available before the end of the calendar year. In this blog, we’ll tell you what we did and how we did it.

We began by selecting a real use case, along with the typical challenges, from our existing customers. We chose a mid-sized enterprise deploying VDI with office applications and a departmental application for end users. Citrix Machine Creation Services provisioned 100 XenDesktop knowledge worker instances for the desktops. For the departmental application, we went with Microsoft SQL Server under heavy load. Accompanying these applications is a large mission-critical database residing on two bare-metal systems running Oracle Real Application Cluster (RAC), with the storage on the Nutanix system. We also demonstrated day 2 operations, including cloning a mission-critical database for test and development. The clones don’t have to live on bare metal, so we generated a virtualized point-in-time copy of the production data in an AHV cluster VM.

The technology to make it possible

We built our environment on the native Nutanix hypervisor, AHV, supported by our web-scale architecture; this is the core underlying framework for everything else we’re about to describe. After that, we pulled it all together with Nutanix storage and networking as well as partner integration.

As mentioned above, we used Citrix XenDesktop with MCS integration for AHV. MCS on Nutanix is a perfect match, either with native full clones on AHV or shadow clones on other hypervisors. The ability to spread the I/O load of both the clone and the image-backing data around the cluster makes MCS significantly more scalable and responsive in large environments. We provisioned 100 in this small, mixed workload cluster, but could go to thousands in larger clusters.

Desktops imply users, and users need home directories. This is where another new Nutanix technology comes into play. Our highly scalable Acropolis File Services (AFS), which will be available this Fall, allows us to place the Windows user home directories in the cluster itself. The homedir shares distribute across the cluster and the number of home directories scales seamlessly as your desktop environment grows. With this unique capability, you no longer need a separate filer or a 3rd party technology–all VDI VMs and user data will be maintained in a single infrastructure.

The VM that hosts the SQL Server 2014 instance is running Windows 2012R2. Microsoft has validated AHV via the Server Virtualization Validation Program (SVVP), which means that all Microsoft applications, such as SQL Server, are then supported to run on the Nutanix platform with AHV.

Some customers have applications and workloads that they can’t virtualize due to business or operational reasons. For these customers, Nutanix is introducing Acropolis Block Services, or ABS, which allows access to storage through iSCSI. In these scenarios, an application that can’t be moved to a VM can still take advantage of web-scale benefits and comprehensive storage management. With ABS, you are no longer stuck paying for expensive and inefficient silos of legacy bare metal storage.

No compromises on performance

This demonstration was designed to show that the Nutanix enterprise cloud platform could easily run all of these applications on the same cluster without compromising performance or manageability. We created this test scenario by running workload generators that produced load appropriate to the customer use case described above. We viewed the workload performance though Prism and each application’s native management tools. 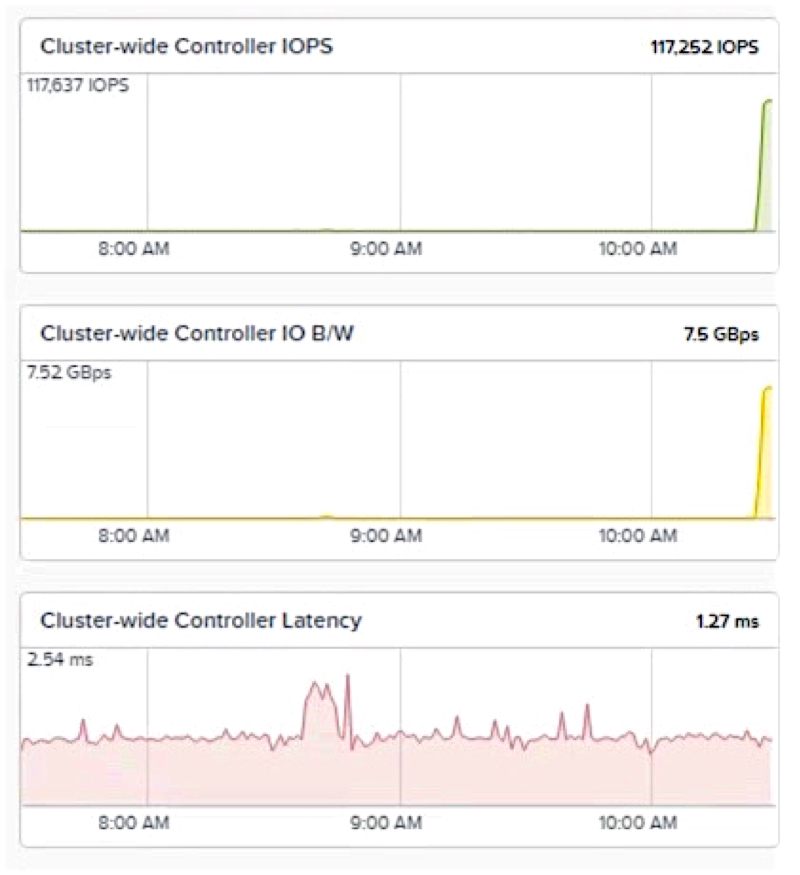 The hardware underneath it all

The Nutanix team worked closely with OEM partner Lenovo on the demo. The Nutanix software (AOS and AHV) ran on a cluster of all-flash Lenovo HX series servers. The SQL Server database and Citrix XenDesktop were fully virtualized and the Oracle RAC database is running bare metal on a pair of Lenovo 3850-X6 servers.

The use of all-flash systems allowed the cluster to deal with the heavy throughput created by the Oracle and SQL Server database instances. As the figures above show, all VMs on the system experienced high performance, including the Oracle RAC database using iSCSI volume groups. In total, 136 discrete objects resided in the cluster once the XenDesktop, SQL server, Oracle, and AD infrastructure VMs were built.

If you are at the conference, stop by the expo hall for a live demonstration. You can also send us a note (info@nutanix.com) or DM us on Twitter (@Nutanix) to setup a customized briefing and architecture discussion about how Nutanix technologies can help you tackle your datacenter challenges.