Raising the Bar and Pushing the Envelope on Performance

The release of Acropolis 4.6 illustrates how the constant drive for innovation at Nutanix is paying off big in performance. The formal announcement is included here detailing the new products and major features. Acropolis 4.6 demonstrates a step-function increase in system performance which, when compared to the previous release, boasts up to 4X improvement in small IO random reads & random writes, typical of tier-1 transactional databases running on SQL Server and Oracle. Software optimizations are responsible for the improvements. Customers can alleviate any performance bottlenecks via a simple, non-disruptive, 1-click software upgrade. Hardware and applications stay unchanged and applications take no downtime. Benefits of improved software are realized without IT’s knowledge, not unlike what happens in the public cloud where refreshes to backend IaaS infrastructure go unnoticed by end user developers and IT teams.

Figure 1 below captures the performance increase since the last release:

Reversing the “inverse relationship” between number of features and system performance

Rapid pace introduction of products and features results in a considerable amount of additional code optimized for features; the consequence is typically constraints on system performance. However, exactly the opposite is true with Nutanix – system performance has continued to improve in the midst of rapid development of new products and major features. Pushing the envelope requires Nutanix to think years ahead of the industry; the innovative culture coupled with the heavy investment in performance engineering is already paying large dividends.

Our second generation All Flash platform – NX-9460-G4 with 4 server nodes attaching 24 SSDs – can drive the enterprise grade SSDs close to their spec’d limits.

NX-9460 is compared to similar configurations of leading All Flash (AF) vendors on two key metrics, in Figure 2 below: 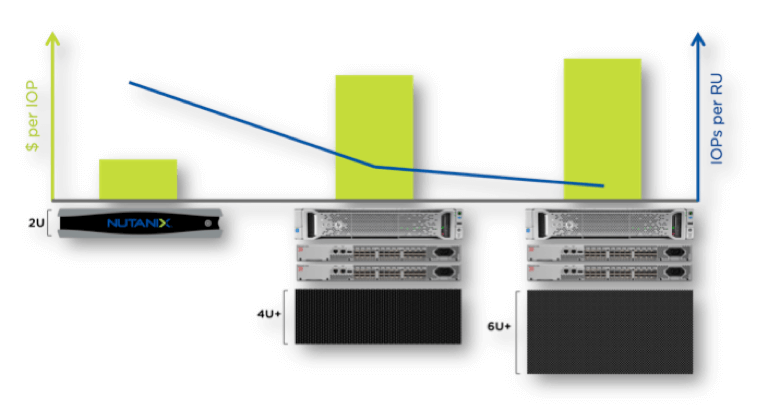 Other points of note regarding competitors:

As shown in Figure 3 below, AWS customers pay 6.5 cents per IOP per month for EBS Provisioned IOPS (SSD) volumes. Over the typical hardware life of storage infrastructure (48 months) this works out to be $3.12. 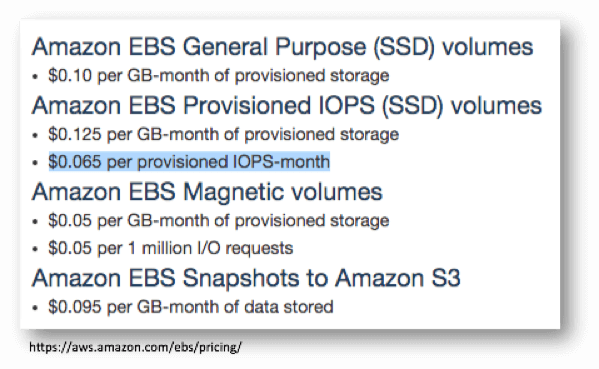 Therefore, Nutanix is up to 5X better, or 80% less, than AWS on price-performance.

Several improvements and optimizations touching the core of the distributed storage fabric were responsible for the step-function jump in performance. Small IO random read and random write performance experienced the largest improvements, therefore transactional tier-1 database workloads have the most to gain.

Continuously improving performance is a journey not a destination. Keeping ahead of the curve to take advantage of next-generation memory class solid state technology (NVMe, 3D XPoint, etc.) keeps us up at night. Such storage can operate at near bus speeds and offers lower latencies and higher throughput than enterprise SSDs. The advantages of such technology are better exploited by an architecture where compute and storage are collocated, allowing compute to access storage at near bus speeds. In other words, Hyperconvergence.

Our architectural advantage combined with a focus on continuous performance improvement positions us very well in the future world of memory class storage. Indeed, it’s a simple matter of continuing to do what we are doing.

Upgrade and see for yourself

The proof is in the pudding! We encourage customers currently experiencing performance bottlenecks, if any, to upgrade their clusters to Acropolis 4.6 and see these improvements for themselves. Please share your feedback, thoughts and questions on the Nutanix NEXT community.