How Moore’s Law is Accelerating the Adoption of Hyperconvergence

According to recent reports from both IDC (via The Register), and 451 Research (via The Register), the array vendor market share is declining despite continued massive growth in storage. The reason? Along with public cloud, next generation technologies like hyperconvergence (HC) have become more ubiquitous.

With compelling benefits like cost savings and centralized management, hyperconvergence has been a major contributor to SAN manufacturer woes

In fact, this advantage over traditional storage solutions is particularly evident when evaluated within the context of Moore’s Law.

Moore’s Law, which states that the number of transistors on a processor doubles every 18 months, has long powered the IT industry. Laptops, the World Wide Web, smartphones and virtualization are examples of technologies enabled by ever faster CPUs. 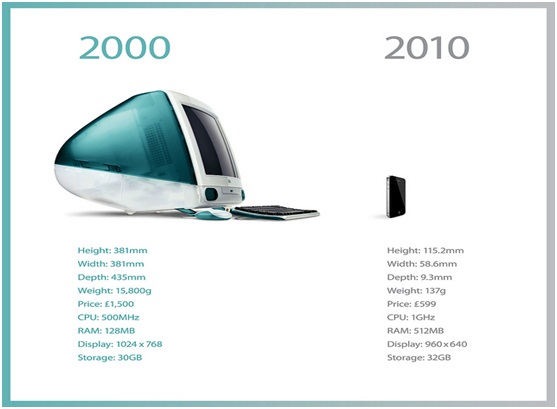 Innovative CPU manufacturing approaches such as increasing the number of cores, photonics and memristors should continue the Moore’s Law trajectory for a period of time. But continued progress also means that there will be those who are left behind.

A SAN’s firmware is tightly coupled with the processors; new CPUs can’t simply be plugged in. This means users are stuck with old technology even as server performance quickly improves. When a business purchases a brand new SAN, the storage controllers are probably at least one generation behind.

On the flip side, hyperconvergence provides users with the freedom to start their storage infrastructure deployment off with as few as three nodes. The flexibility to upgrade nodes as needed means that businesses won’t be forced to use outdated technology years down the road.

And while an HC solution utilizing commodity hardware also depreciates quickly due to Moore’s Law, enhancements in the OS can be applied to the older nodes seamlessly. This increases performance while enabling the same capabilities and features as newer nodes.

Table 2 below shows an example of a typical VDI customer migrating 5,000 PC users to VDI in conjunction with their 5-year refresh rate. Each year rather than getting new PCs, 1,000 users have their devices locked down or receive zero-clients and are migrated to virtual desktops.

The Inevitable Transition from SANs to Hyperconvergence

SANs were designed for the physical world, not for virtualized datacenters. The reason they proliferate today is that when VMware launched vMotion in 2003, it mandated, “The hosts must share a storage area network”.

But Moore’s Law marches relentlessly on. Hyper-convergence takes advantage of faster CPU, memory, disk and flash to provide a significantly superior infrastructure for hosting virtual machines. It will inevitably replace the SAN as the standard of the modern datacenter.

Don’t believe us? See how using a hyperconverged solution can cut your total cost of ownership by up to 60%.