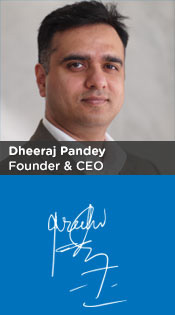 Welcome to 2014! We’ve started the year with a bang. Your faith has been a big part of this watershed moment in the company’s history. Thank you for your unflinching support. As the new year begins, I’ll take the liberty to make some industry predictions, although I acknowledge how perilous it is to hold an imaginary crystal ball.

2014 will be a special year for Nutanix, as we expand the scope of Web-Scale IT to include all enterprise applications that can be virtualized. Web-scale will be the necessary ingredient for enterprise systems to achieve true efficiencies. Like consumer and infrastructure public clouds, enterprises will rapidly embrace rack-mounted commodity servers over expensive proprietary blade servers. Scale-out software will then manage server-attached flash and spindles in a global resource pool to form the foundation of distributed storage. Software, with deep analytic capabilities, will also form the foundation of next-generation systems management. Think Big Data for the datacenter, where the focus will be the application, not hardware, and definitely not low-level abstractions such as LUNs, volumes, or vLANs.

2) The current IT shake-up will stabilize on hybrid computing

This year will also see a rapid deployment of flash at the expense of spindles. Like web properties, we will enable server-attached flash more than anyone else. As private clouds move away from monolithic single machine appliances to massively parallel architectures, it will pave the way for seamless public cloud integration. Hybrid computing is where this current IT shakeup will stabilize. ESXi, Hyper-v, KVM, and AWS will be the dominant “virtual” sheet metals of the future, with Azure trying its best to crash the party in 2014.

3) Large incumbents will find a way to stay relevant

Gartner will embrace web-scale IT as a distinct discourse — and perhaps a separate Magic Quadrant — to bridge the private-public cloud divide. The channel will embrace web-scale, flash, and AWS in 2014 in its pursuit of staying relevant. IBM and HP will be forced to take bolder measures — beyond dreamy-eyed “moonshots” — to stem the tide. An unencumbered Dell, out of public market scrutiny, will use 2014 to become relevant one more time. Oracle Exadata and SAP HANA, with their success stories in large enterprises, will continue to surprise the NoSQL fanboys. Microsoft’s bright spot will be Office 365, and its ability to take both Google Apps and Box head on. Fiber Channel will spend one more year in the journey towards its slow death, just like Mainframes did a couple decades ago. Microsoft would have found a new CEO, but the leadership void in the post-Ballmer era would not have filled at least until 2015. This succession is looking increasingly tenuous.

To conclude, the only thing I can predict for 2014 with certainty is that at Nutanix, we will continue to make storage an invisible resource in the datacenter. And that is a promise from all of us here.