This post came about through a few discussions on Twitter and encounters in the field, and before I knew it I had volunteered to write a post for the Nutanix Blog. Now my experiences tend to be slanted towards VDI since I’m often brought in to tell war stories of building large VDI environments with traditional infrastructure in my days before Nutanix, and these conversations often evolve into discussions regarding other workloads that can be placed on Nutanix. After a couple of these encounters, I felt compelled to share the story of how Nutanix goes well beyond VDI, some might say to Infinity and Beyond.

First, lets look at why Nutanix rocks at VDI. We’ve seen a rapid uptake as the go to appliance for VDI; VMware and Citrix teams come to us because they see a solution to their virtual desktop infrastructure challenges. VDI is plagued by the I/O blender problem and tends to be a very unpredictable workload that requires a considerable amount of infrastructure when implemented with traditional hardware.

Nutanix changes the story, converges compute and storage in a single appliance, purpose-built for high performance virtualization. Heat Optimized Tiering ensures the hottest data is in the high performing flash tiers and cold data stays down on the spinning disks, while  automatically migrating data between tiers based on given thresholds. A single Nutanix block is able to support over 20,000 IOPS in 2U which is perfect for the high random IOPS generated by VDI workloads and other demanding VM workloads.

I wanted to share the story of Nutanix for VDI first as there are common themes seen in VDI that are repeated across all workloads on Nutanix. High performance virtualization and linear scalability in an ultra-dense platform as displayed in the graph below.

Desktop Quantity at Scale from our View on Nutanix Reference Architecture

Next, lets take a look at some of our Hadoop benchmarks. Here we see the common themes from VDI workloads on Nutanix, ultra-dense and linear scalability, up to 2x the density of the next closest hardware infrastructure. Now admittedly, Hadoop and Big Data are newer workloads in the enterprise datacenter. For my VDI brain, I compare it to where VDI was 3 or 4 years ago. The percentage of Hadoop workloads on Nutanix is relatively small at the moment, but we expect that to surge with our recently announced support for KVM, allowing customers to run virtualized Big Data workloads while avoiding the cost of VMware licensing. For those just getting started with Big Data here is a helpful doc to help you on your way – Hadoop Reference Architecture. 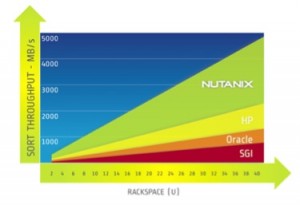 Now for the workload most often running on Nutanix in the field; server virtualization is a broad category and covers multiple scenarios. We have customers running their supporting infrastructure and application servers along with their VDI on Nutanix. We have customers running their entire test/dev environments on Nutanix. Most importantly, customers use Nutanix for their core server virtualization workloads; large databases, email servers, and critical production servers. And with the disaster recovery features announced in our 3.0 release, customers are using native storage replication to protect VM workloads on Nutanix blocks across data centers.

I love working in the field and coming across each customer’s unique needs and use cases. In my limited field time (I started in October), I have seen many diverse uses of Nutanix and they always come back to the theme of a dense, linear scalable appliance built for high performance virtualization. One of my first field visits was a customer running a unique combination of Server Virt and Big Data analytics with a custom-built Windows application processing documents spread over 100+ Server VMs on a single Nutanix 2U block. That day we dynamically grew their cluster by adding another 4 nodes with no downtime, talk about scalable and dense!

I’m on our Federal team, and it would be remiss if I didn’t mention our tactical use cases. Nutanix is helping multiple branches of the military to revolutionize how they deliver equipment to the field, allowing them to decrease power and cooling requirements while cutting weight requirements in half. I like to highlight this use case as it demonstrates how Nutanix is supporting some of the most critical workloads on the planet.

No matter the workload, Nutanix holds true as an ultra-dense, highly scalable, high performing virtualization appliance. For the predictable workloads, benchmark on a single Nutanix block, accurately derive your VM number, and scale out with Nutanix lego-like building blocks. For the less predictable workloads you can grow 1 node at a time (1/4 of a rack unit), allowing easy linear scaling of compute and storage, rather than the traditional models that offer unpredictable growth and racks of equipment being shuffled across your data center floor.

For the IT Managers and CIOs planning a budget, do you want the randomness of traditional hardware or predictable growth with Nutanix? Nutanix delivers the Data Center of the future, 100% virtualized with identical building blocks to serve all your virtual workloads. Instead of unique hardware for each workload, 2U boxes are tied together with intelligent software to provide high performing resources to every virtual workload. 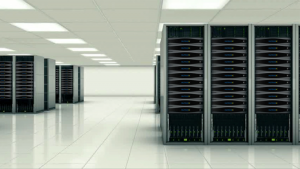 Thanks for reading, for more ramblings, rants, and general ponderings you can follow me on Twitter @dgfallon