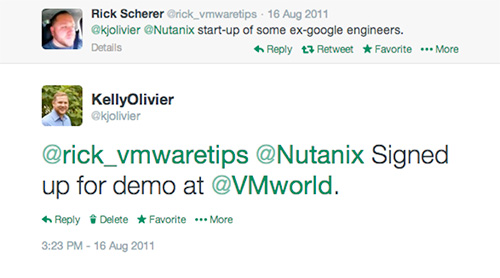 About 4 years ago, I worked for a small integrator and was tasked with designing a VDI infrastructure solution for 1,000 desktops. In those days, this was still a fairly large VDI solution. Although I was a seasoned virtual infrastructure engineer, had never done a desktop solution of that size.

A couple of my peers and I had designed a solution utilizing traditional infrastructure, but we decided to check out the “converged” solutions which were brand new at the time. Despite the steep learning curve (Cisco UCS was complex), we thought Vblock was superior to the traditional servers and SAN since the compute side was more scaleable than traditional servers.

The difficult decision was whether or not to buy the small Vblock which provided enough infrastructure to start, or to buy the larger Vblock which would accommodate our potential future needs. We decided on the later since we could potentially end up expanding to 3,000 users, even though the cost for the first set of 1,000 desktops was over $7,000 each. We spent MANY hours in planning with VCE which was disheartening since the idea of choosing Vblock in the first place was to essentially speed up deployment. The Vblock consumed 3 full racks of hardware.

A year later I had moved onto another team that was tasked with a similar opportunity with one difference. My boss said that we had to design a much smaller solution to start with 100 desktops, yet be able to scale to support thousands of desktops at a later date. I remember snickering a little on the inside. “IT doesn’t work that way” I thought to myself. “You can’t use the same solution for both ends of the spectrum unless you either buy small, rip and replace later, or buy big and hope to grow into it.” I was in a bit of a pickle, and my past experience with the Vblock stood at the forefront of my mind.  How was I supposed to accomplish this?

A couple weeks later, I heard people on Twitter talking about this new company called Nutanix.  All I heard was that they were founded by some ex-Googlers. The company was literally a week old or so at the time. I remember thinking that the solution sounded interesting, but I was concerned because I had heard of these types of virtual storage appliances before. I had even tried a few of them and they had two problems: They didn’t perform at scale, and they didn’t, well…scale period. Nutanix’s solution had a key difference: It didn’t just use local storage, it used flash in local storage as well.

VMworld 2011 was taking place then, so I decided to check out the Nutanix booth. It was over in the corner with other small vendors. I saw the Nutanix block in the booth running several hundred virtual desktops. I later had the opportunity to speak with engineers in an upstairs conference room. Although the room was packed with attendees trying to hear what all the chatter was about, I was able to meet Sudheesh Nair, now the VP of Worldwide Sales.

The existing infrastructure of our VDI solution was 3 pizza box servers and a small SAN.  It had a tray of SATA disks, and was really struggling just to run our basic virtual workloads which were about 15 servers and 50 desktops. It had about 3K IOPS which makes me laugh.

I decided to give Nutanix a try. I remember going to my management, and saying, “If this thing works, it could be big for us.” After all, Nutanix claimed to have the performance and scale story I was looking for. I would either be the IT hero or the IT dunce. If it fell flat on its face, we could throw it in Test/Dev. Nutanix was a brand new company with no customers, but their story made sense to me. The idea of starting small, consuming only the resources I needed, then scaling on my timeline resonated with me. My management was worried about doing business with a brand new company.

We bought a three node cluster. A month later we bought another node completing the block.  I threw all kinds of VDI and servers workloads on it, and was impressed at the block’s resiliency. Ultimately, we tested the block for several months before we bought several more and put them into production.

Now, I could sit here and say that I was very forward thinking, ahead of my time, and that I had a vision of what Nutanix would be. That I knew Nutanix would expand in record-breaking fashion to become the fastest-growing infrastructure startup in the last ten years. I could say I knew Nutanix would, after only two years of selling product be valued at over 1B dollars. That Nutanix would bring dreams of rainbows and gumdrop smiles. I could, but that would be foolish, and to be honest it would be a lie. I had no idea. There was risk, but Nutanix simply had a product that did what they claimed. It performed; it scaled; it was fast and simple to deploy. Support was unprecedented. It far exceeded my expectations.

It’s a bit comical when I think back to the feature set then in place. The Nutanix block pushed about 20K IOPS. Just two years later and it boasts about 100K IOPS with enterprise features all the way from patented deduplication across multiple tiers, compression, VM level disaster recovery, HTML5 management, and support for three hypervisors – to name a few. This all results from the beauty of being software defined.  Nutanix uses no proprietary hardware. It cracks me up to talk to the engineers about the “good ol’ days” which was only a little over two years ago.

In March of 2013, I decided to join Nutanix’s federal sales team. I am still as passionate about this product as I was when I was a customer. I enjoy telling others about our products, about what our company has achieved, about the millions we have saved customer, and about the smile on the faces of new customers when they “get it.”

This is my first startup, though we certainly can’t call Nutanix a startup anymore. I have learned so much here, and know that our talent is some of the best in the industry. There are VCDXs in sales roles and CCIEs in support roles. Every Nutanix employee is passionate about our products and vision from marketing to engineering to the executive staff. This week at SKO, I am floored with the features on the roadmap and am excited for what is coming in the near future. I have seen crazy ideas achieved, and you just have to smile and take a breath at times. Then keep going. The people and culture make Nutanix. They are our secret sauce.

No matter what the future holds for this company and the passionate, enthusiastic, never slowing down crazy workforce we have, I will forever be proud of being Nutanix’s first customer.