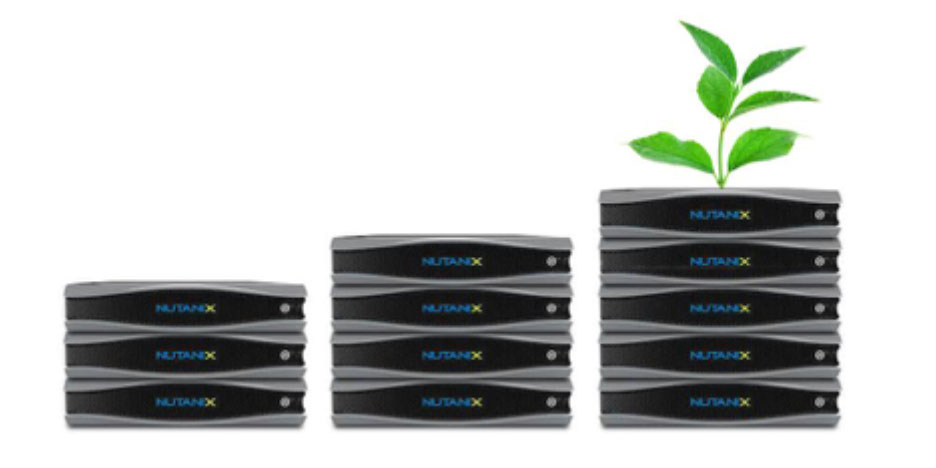 “So you’re telling me I should buy less Nutanix?”

A CIO said this to me in Tokyo after I showed him our financial modeling methodology. Our sales rep was sitting next to me, so I felt a little uncomfortable, but I responded, “Yes. From a financial modeling perspective, why would you buy more Nutanix than you need? For one thing, maybe you’ll be acquired or something and the additional purchase won’t be necessary. Far more likely, you will love your implementation and want to expand it, but if you wait until you actually need the product, fewer nodes will be required than if you purchase them up-front.”

Nutanix reshapes the IT economic and operational landscape in myriad ways, and many have been documented by various analyst studies — IDC (TCO/ROI), IDC (Org transformation) and ESG. One of the most compelling financial advantages results from combining Nutanix’s fractional consumption capabilities with its 1-click software-defined upgrades and the continuing advancements in technology typically associated with Moore’s Law.

SANs, including all-flash arrays, have several economic challenges, not least of which is limited scalability. In a traditional 3-tier infrastructure (centralized storage + storage network + compute), adding a new array creates an additional infrastructure silo and requires a painful data migration.

As a result, SAN buyers typically purchase far more capacity up-front than required, but this increases the cost of rack space, power and cooling along with depreciation of the extra hardware. And even if the excess SAN capacity proves adequate until the scheduled product refresh date, the organization faces a forklift upgrade at that time.

Nutanix provides a fundamentally different experience where a mouse click adds additional nodes to the cluster, and older nodes can easily be retired or repurposed. This creates an ‘evolving’ cluster and eliminates silos and painful data migrations.

Nutanix’s capacity forecasting and modeling capabilities make it simple to predict upcoming demand. And buying infrastructure in bite-size pieces rather than large chunks makes it easier to set up a meaningful chargeback or showback system.

Another economic challenge of SANs results from the tight coupling of the firmware with the underlying proprietary hardware. A SAN customer can’t download a new version of SAN firmware and have her 3-year old array act like new. 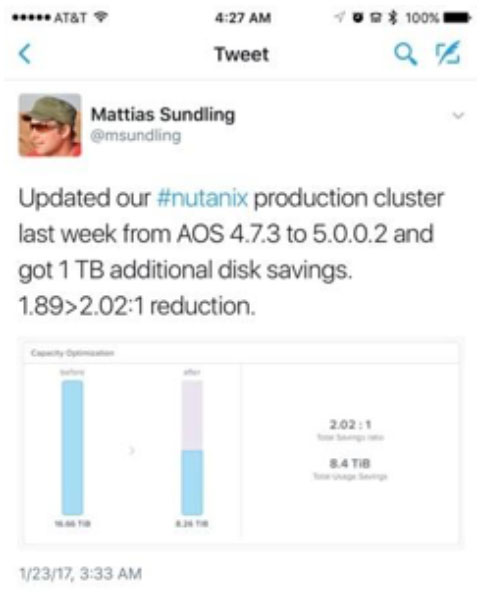 Nutanix customers, on the other hand, can do exactly that. With a single click, they upgrade their nodes, regardless of age or location, with the latest Nutanix Acropolis Operating System (AOS) as well as upgrade the underlying server firmware and even the hypervisor. These upgrades take place on an automated rolling basis whereby one node is taken off-line, upgraded, validated, put back on-line and then repeated with the next node, and so on, until the upgrade is complete.

Here is a picture someone tweeted of upgrading their Nutanix nodes from their Tesla. I saw a tweet once by a customer saying that while vacationing on the beach he’d just upgraded his production environment through his iPhone. While Nutanix does not recommend this as best practices, the 1-click upgrades are so simple that it can be done. 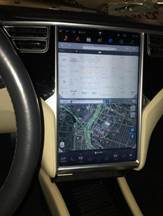 While all the nodes have the same AOS and are managed from a single Prism management pane, they also now run new capabilities such as the Acropolis Block Services and Self Service Portal introduced in the latest AOS release. And Nutanix has continuously, and significantly, enhanced its software with both increased performance and capacity.

The tweet from Mattias Sundling at the beginning of this section, for example, boasts about saving a TB in disk. The following tweet from Hugh Devaux relays the 40% increase in IOPs combined with a 50% decrease in latency from upgrading AOS 4.5 to 4.72.

This increased performance and capacity translates into a higher density of VMs per node. Nutanix customers, without changing – or even touching – any of their existing hardware, enable their nodes across the globe to handle more VMs. As they expand their Nutanix environments, they need fewer new nodes than they would sans (pun intended) the 1-click upgrade enhancements.

Moore’s Law, which states that the number of transistors on a processor doubles every 18 months, has long powered the IT industry. Laptops, the World Wide Web, iPhone, cloud computing and most recently software-defined infrastructure are examples of technologies enabled by ever faster CPUs.

Despite concerns, there is no end in sight for the continued performance benefits of advancing technology, even though the ways in which that performance is achieved, such as using more cores, photonics and memristors, differs from the original precepts. NVMe, for example, is already here and 3D-XPoint is on the horizon.

As Nutanix customers expand their projects over the years, hardware-enabled increases in density can reduce the number of new nodes required to handle the same workloads. This number is can be further reduced when factoring in the increased density of existing nodes resulting from the software-defined 1-click upgrades.

The table below shows what this capability can look like in practice. The chart shows an organization migrating to VDI, but it is applicable for any virtualized workload: Splunk, big data, private cloud, server virtualization, DR, branch office, Unified Communications, SAP or Oracle based ERP environments, etc. In this example, the 5,000 PCs have a 5-year refresh rate, meaning that 1,000 users, on average, have their machines upgraded each year. 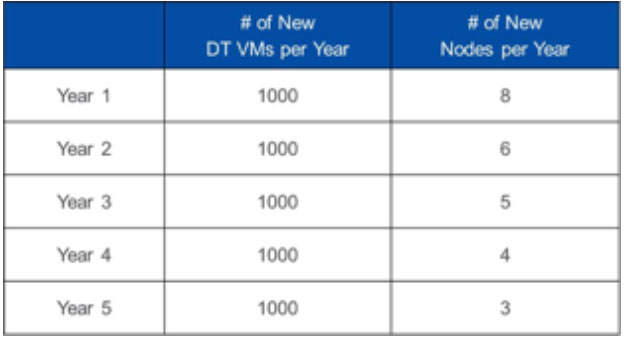 Between the software-defined 1-click upgrades and the hardware-defined technology advances, if we assume an average increase in density of 25% per year, it means that when the next 1,000 users come up for refresh in the second year, only six Nutanix nodes may be required. And by the time the last 1,000 users come up for refresh in the fifth year, only three Nutanix nodes may be needed to run their virtual desktops.

The capital costs of the VDI project are slashed along with the associated rack space, power and cooling. Perhaps even more importantly, Nutanix eliminates all the 3-tier risk of under-buying and facing an expensive and costly upgrade to a new SAN. A forklift upgrade is a nonexistent concept with a Nutanix Enterprise Cloud platform.

Selling a Platform, not a Product

After pausing for a few seconds to take in my statement about not buying more Nutanix nodes than he needs up-front, the CIO said, “But that’s going to hurt your sales.” I responded, “Well you might think so, but we know for sure that it doesn’t.”

The reality is that Nutanix customers tend to purchase more nodes – in fact, a lot more, over time. At the end of Nutanix’s quarter ending 10/31/2016, for example, the company reported the average lifetime purchases for its 376 Global 2000 customers increased by a multiple of 7.3 compared to their original purchase. 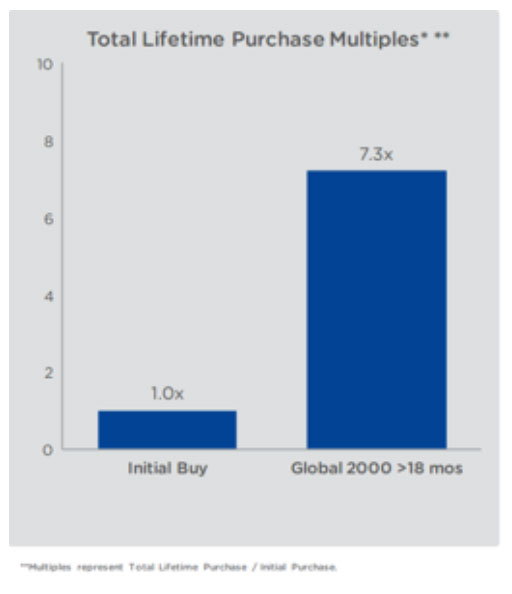 I told the CIO that there are two primary reasons for this escalation in purchases. The first driver is that when a customer puts in Nutanix for a new use case, the organization tends to quickly see business benefits such as increased revenues, decreased developer build time, enhanced employee productivity, etc. The results are spectacular enough that IT decides to accelerate the project deployment rather than waiting over a number of years for full implementation.

The second driver is simply that when an organization deploys Nutanix for an initial use case, IT quickly sees the value resulting from a simplified environment, slashed downtime, increased application performance, and so on, and the Nutanix Enterprise Cloud starts spreading throughout the organization to also become the platform for additional use cases. 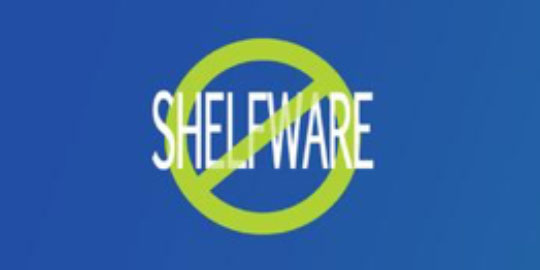 I made a little joke at the beginning of this post about being uncomfortable talking about buying less Nutanix in front of our sales rep. This type of humor should resonate in a typical 3-tier environment where customers not only purchase lots of excess storage capacity, but all too often virtualization and associated software products that end up as “shelfware.” Nutanix not only encourages a pay-as-you grow model for customers, but its reps use tools such as Runway and Sizer to help customers avoid purchasing more kit than currently needed.

From its beginning, Nutanix has had a philosophy of “less is more.” Stripping the complexity out of infrastructure, out of management, out of upgrades and out of virtualization results in cloud-like simplicity and agility but with on-premises control. The ability to purchase only what is needed, and to reduce the number of nodes required as the project expands, leaves customers with more savings to use for transforming their businesses.


Disclaimer: This blog may contain links to external websites that are not part of Nutanix.com. Nutanix does not control these sites and disclaims all responsibility for the content or accuracy of any external site. Our decision to link to an external site should not be considered an endorsement of any content on such site.