About five hundred million years ago, creatures of the ocean started venturing onto land. Evolution, through many iterations, enabled some select creatures with the unique ability to live both on land and in the water. This ability to feel native in both places was a radical breakthrough and was the key to the success of these hybrid animals. Most fish, however, still remain confined to the oceans today. No one would take a fish in an aquarium and place the aquarium in the middle of the marshes and call it adaptation or migration. It’s an uncomfortable lift-and-shift! Life (and more importantly death) has taught nature to shed fragile contraptions and favor designs that have native resiliency and efficiency built into them. It was through a series of explorations and mutations that only about 200 million years ago, the true crocodiles arrived. They have since ruled the planet and proved to be the hardiest of the large animals. 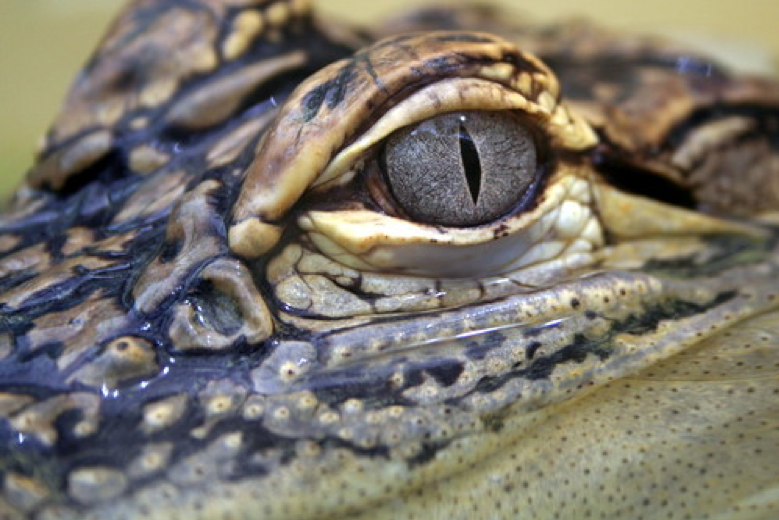 "The eye of a caiman" by Another Seb is licensed under CC BY-NC-ND 2.0

In the tech industry, evolution happens, but at a much more rapid clip. About a decade ago, enterprise IT infrastructure was presented a challenge to move to the cloud, driven by the desire to reduce CapEx, increase agility and expand businesses rapidly at a global scale. A serendipitous mutation called Hyper Converged Infrastructure (HCI) happened around the same time, which brought in cloud-like features to enterprise infrastructure. The three-tier architecture, just like the fish, has not been able to survive in the cloud. Early attempts by search companies to use three-tier architectures with SAN and NAS appliances did not succeed. HCI ushered in a new cloud-like architecture in the enterprise and now, the on-premises data centers are rapidly deploying HCI. While this first transition is maturing, some of the HCI architectures are “coming out of the ocean” and forming Hybrid Clouds — some more boldly than others.

Just like in nature, for any engineering architecture to succeed, it needs to be simple and efficient.

AWS is a leader in cloud computing and makes it simple to bring Nutanix HCI software stack to the cloud by providing API-driven access to its bare metal servers. While there are many different ways of bringing an HCI stack on top of AWS bare metal, at Nutanix, we have chosen the most native approach to the problem with the conviction that such AWS hybrid cloud architecture is the best solutions for our joint customers.

We had a choice between creating a new AWS account for the customer or using an existing one to manage NCA. Using a new AWS account would have given a clean working space and made it somewhat easier to build the product. However, from a customer’s perspective that proved to be less optimal because the customers cannot use their existing accounts and credits with AWS. Hence, we decided to not create the burden of new AWS accounts for the customer. Their current accounts can be used. The customer will be directly billed by AWS for the infrastructure spend and only pay Nutanix for the software cost of using Nutanix for the duration the NCA are used.

We had a choice between deploying the Nutanix VMs on an overlay network (using VXLAN) on top of the AWS subnets, or deploying the Nutanix VMs directly on the AWS subnets. Deploying an overlay network provides for easier integration with the underlying cloud networking because nothing needs to change in the way the hypervisor does IP address management.

However, choosing an overlay presents many challenges:

Hence, we decided to explore a more native integration with AWS EC2 networking. This new native networking model has the following features:

NCA are designed to look virtually the same as on-premises Nutanix clusters. These clusters run the complete Nutanix AOS and AHV stack with no change in CLI, UI or APIs. This allows existing IT processes or 3rd party integrations that work on-premises to continue to work with NCA. 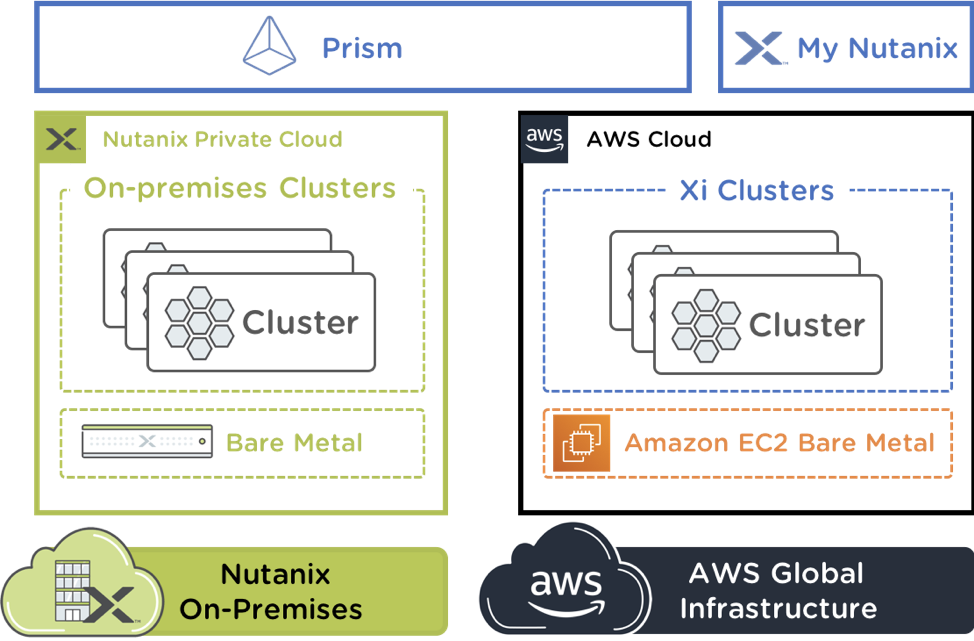 NCA look similar to Nutanix clusters on-premises. A cluster can have 3 or more EC2 i3.metal bare metal instances. AHV runs directly on the bare metal and exposes the local NVMe storage to CVMs. The CVMs on each instance cluster together and provide single storage fabric across all nodes with all the enterprise storage capabilities that enterprise apps need. The storage fabric in NCA can be connected to the on-premises using Nutanix AOS DR, backup, replication capabilities, allowing seamless mobility of stateful applications from on-premises to AWS and back.

Not only can NCA natively interact with the on-premises clusters at the storage layer, they can also extend Nutanix hybrid cloud storage capabilities like Volumes, Files, and Buckets to native workloads running on AWS EC2. This allows for workloads that require DR or backup to on-premises but need to leverage compute from AWS EC2 for bursting. 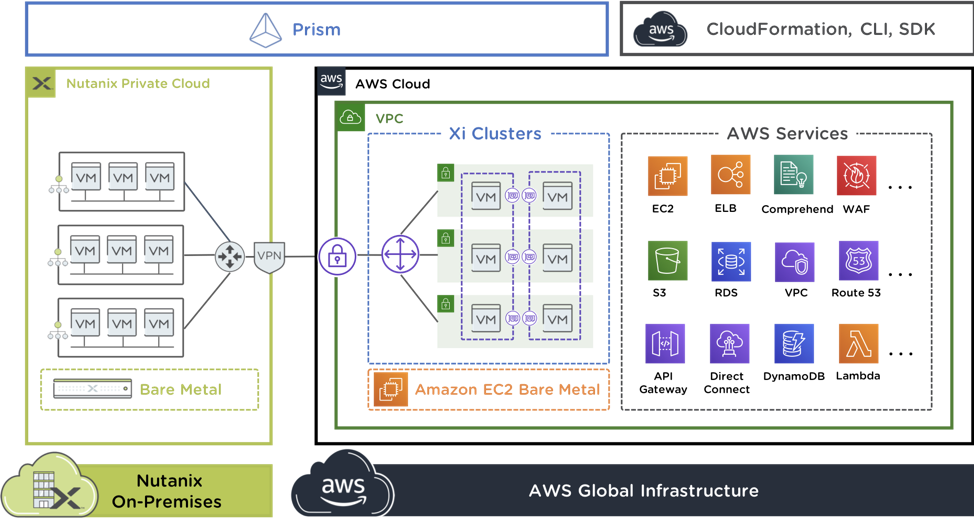 AHV runs an efficient embedded distributed network controller that integrates user VM networking with AWS networking. The network controller does not create an overlay network. The way it works is that all user VM IPs are assigned to the bare metal host where the VMs happen to run. The AHV embedded network controller simply forwards the packets from the host to the right VM on the host or wherever it might have migrated to. IP address management is integrated with AWS VPC, hence all user VM IPs are allocated by AWS from the AWS subnets in the existing VPCs.

As a result of the above cloud architecture, there is no need for network controller VMs, network edge gateways or any other management VMs to be run on the NCA. Microsegmentation is implemented via the embedded networking controller in AHV and the policies are managed from Prism Central which could be running on-premises or in the cloud on the NCA.

What remains the same compared to on-premises?

Almost all features, APIs and user experience remains the same. The clusters in AWS act just like a true extension of the on-prem DC. There is seamless mobility between on-premises and cloud and vice-versa without any changes to the applications.

What is different between Nutanix On-premises and NCA?

Six Use Cases of NCA

Successful enterprises routinely are looking to quickly expand the presence of their business apps into regions where they do not yet have a physical datacenter footprint. This needs to be done without any change to the apps. With NCA, enterprises can choose from the numerous AWS Global regions to rapidly expand their presence world-wide.

Many enterprises have to deal with fragmentation of data centers assets and would like to consolidate or shut down some underperforming datacenter assets. Having the option to consolidate into a nearby AWS availability zone with an elastic capacity while not having to worry about the compatibility of apps with the new cloud environment is ideal for such transitions. NCA offers the ability to run enterprise apps as-is on the AWS infrastructure while managing the applications from a single Prism console which can be either on-prem or in the cloud.

Retail companies see steep seasonal peaks in infrastructure demand. Since adding new nodes on-premises is a long process,  many enterprises are forced to have an infrastructure that is mostly underutilized during most of the year. Using NCA, now enterprises can keep the utilization high during non-peak seasons by reducing the overall infrastructure footprint and bursting into the cloud in the peak seasons. Since the NCA and on premises clusters are on the same network and storage fabric migration of applications back and forth is convenient.

Some classic apps require access to shared disks with SCSI-PR support. NCA enables these apps to now run inside AWS. This flexibility allows for new class of applications to migrate to the public cloud.

High end databases, big data apps or other I/O hungry applications may not be able to get enough storage IOPs in the cloud native environment without changing their architecture or spending a lot of provisioned IOPs. NCA brings the high storage IOPs capability of AOS on top of AWS bare metal servers, providing for a new class of I/O hungry applications to move to the cloud.

© 2019 Nutanix, Inc.  All rights reserved. Nutanix, the Nutanix logo and the other Nutanix products and features mentioned herein are registered trademarks or trademarks of Nutanix, Inc. in the United States and other countries. All other brand names mentioned herein are for identification purposes only and may be the trademarks of their respective holder(s), and Nutanix may not be associated with, or sponsored or endorsed by such holder(s).  This document is provided for informational purposes only and is presented ‘as is’ with no warranties of any kind, whether implied, statutory or otherwise