Early in Nutanix’s history, we were faced with a choice to travel one of two paths. The first was to focus on building our business close to Nutanix headquarters, and establish ourselves in North America. Many companies choose to do this at the outset, and then build their businesses in international markets. The second choice was to build strong foundations in international markets at the same time we grew business in North America. Nutanix chose this more difficult road, proving its solutions across the world simultaneously. This offered the opportunity to learn from, and to serve, customers with diverse backgrounds and business challenges.

As early as 2012 we planted the seeds of our organization in Europe and Asia Pacific markets, recruiting experienced, customer-focused sales teams. In early 2013, we opened support centers in Sydney and Amsterdam, firmly establishing a 24/7/365 ‘follow the sun’ support organization. Today, we have five worldwide support centers – Sydney, Beijing, Tokyo, Bangalore and Amsterdam – outside of the United States. This is in addition to our two U.S.-based support centers in Durham, NC and San Jose, CA. These early worldwide investments are paying off. Nutanix now has more than 3000 customers in over 90 countries, across six continents.

The Continuation of a Journey

As part of the journey to supporting multiple languages, the current AOS v4.7 contains UTF-8 support so administrators can name VMs and other Prism entities in the native characters of the preferred local language.

At today’s .NEXT On-Tour event in Beijing, Nutanix is proud to announce local language support planned for the Asterix software release. Simplified Chinese and Japanese are the first languages to be supported. A localized Prism Dashboard and Prism Central explorer are two of the planned views. Additionally, Community Edition localization has the potential to bring our zero-cost software to more enthusiasts across the globe.

We are also planning to have the product documentation translated and available in all of the supported languages in the Asterix release.

One of the things I’ve found personally challenging is navigating through a complex UI in a foreign language in order to switch it to my preferred language. In true Nutanix fashion, we are making it easy to switch to your local language. All you need to know is one word, “Language.” Within Prism, a user simply clicks on the gear icon and searches for the word “language” among the options. The user then sees a dialog box to select Simplified Chinese, or the user’s preferred language. 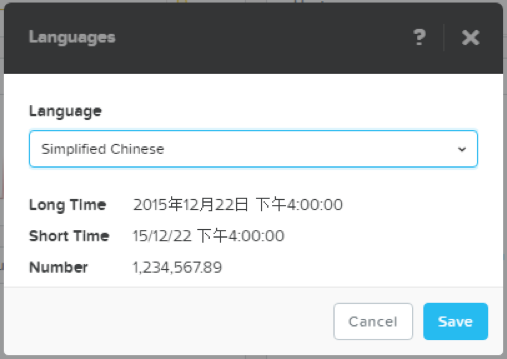 Nutanix believes in continuous innovation and in continuous feedback. Please join us on the Nutanix Next Community site and let us know what you think about this exciting announcement.