There he was up on the big stage at VMworld 2006 general session: my creation, VirtualMan, animated by @JerryChen speaking live with VMware COO, Carl Eschenbach. As a bit of icing on the cake, VMware put up a VirtualMan cut-out where you could get your picture taken as VirtualMan. And the cut-out happened to be close to the booth of our primary competitor. Sweet! 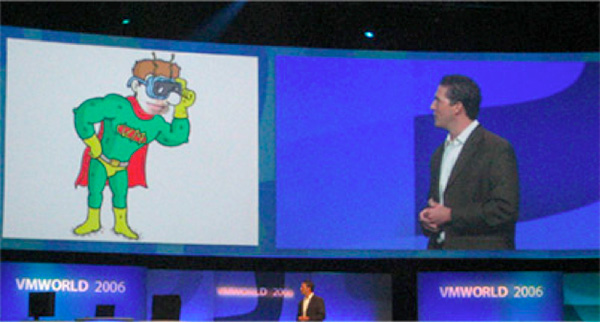 The 2006 VMworld was my second, and probably my favorite, but hardly my last. I went to the next six VMworlds in a row, representing three different channel organizations. I had the great privilege of being able to present at most of them, though honestly, it used to be a lot easier to get a speaking slot.VMware virtualization reshaped our industry and created the foundation for cloud computing. From the first VMworld I attended in 2005 with about 3,700 attendees and 700 partners, to last year’s 21,000 participants, this IT conference is unique among the very many I’ve been to over my 25 years in IT. Nothing I’ve seen matches VMworld for the pervasive energy and enthusiasm from folks excited to be part of the IT virtualization revolution.Ironically, despite all the VMworld conferences, I’ve probably attended less than half a dozen sessions. Like many VMware partners, I ended up visiting the plethora of manufacturer booths or scurrying from meeting to meeting whether with manufacturers or with peers. Then there are the dinners, parties, customer get-togethers and, more recently, tweet-ups. While the sessions were great (and I would try to catch up with at least some of them by reviewing the on-line versions), it was the networking I found to be the most valuable. I’m sure that remains true for many of our partners today. 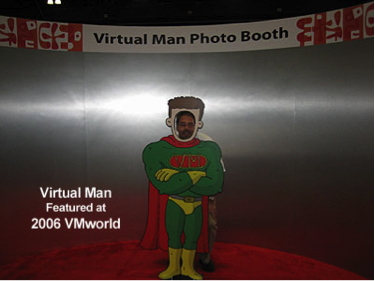 This will be my first VMworld working for a manufacturer rather than a VMware partner. But if possible, I expect the conference to be even busier. I have no presentations this year, but still have plenty of great alliance partners with whom to meet such as Unidesk’s Ron Oglesby.

Most importantly, VMworld will give me the opportunity to meet face-to-face with many of our partners – some of whom I’ve known for decades, and some of whom I’ve yet to meet in person. Being on the channel side for so many years, I recognize the huge investment attending VMworld requires in both cost and time. It is great fun to be able to offer our partners a solution enabling them to bring to their clients the same type of SAN-less scale-out architecture Google pioneered in the cloud provider space. And while VirtualMan won’t be making an appearance at 2013 VMworld (undoubtedly to the relief of my former partner, Gary Lamb, in whose likeness, VirtualMan was drawn – though Gary does admit it helped with his dating), it’s awesome that Nutanix has a comic-based theme. We’re giving away a 1st edition X-Men comic book autographed by Stan Lee. The comic book is valued at $35,000. 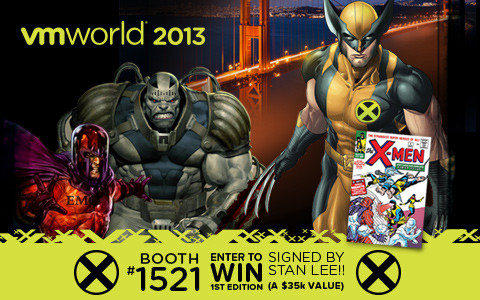 And I love the tie-in of the “X” not only with Nutanix, but with the whole ‘No SAN’ motif.