How do you know when a datacenter technology manufacturer has something truly disruptive? One sign is when channel partners start to focus their businesses around selling and implementing the manufacturer’s solutions.

This type of channel dedication helped make Citrix and VMware into datacenter behemoths, but it has been notably lacking when it comes to conventional server and storage manufacturers. And the incumbents’ “converged infrastructure” spin-offs are not doing much better.

The story is now changing as partners across the globe increasingly embrace the web-scale architecture Nutanix brings to the datacenter.

“Nutanix,” argues Steve Dowling, Director of Converged Infrastructure for Sirius Computer Systems, “has bypassed the ‘low-end disruption’ stage of the Christiansen Failure Framework.” Dowling says that the Google lineage of the Nutanix Distributed File System enabled Nutanix to take the same type of web-scale IT infrastructure that dominates the cloud provider space and bring it directly to the enterprise datacenter.

The Christiansen Failure Framework is described in The Innovator’s Dilemma by Clayton Christianson. Sirius, a national solutions provider with $1.4 billion dollars in annual revenues, uses Christiansen’s model to help ensure they continue to bring the best technology options to their clients. It was recognition of the maturity of the Nutanix offering in terms of market disruption that led Sirius to quickly make Nutanix a strategic partner. Nutanix is currently on track to be the fastest-growing new partner in Sirius’ 34 years of business. 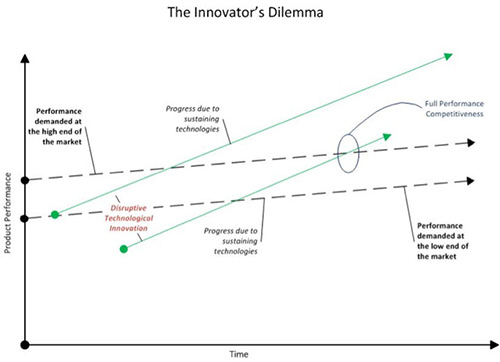 “We created the converged infrastructure division because we recognized early that this is the type of solution that companies need,” said Dowling. “But younger people coming into the workforce, in particular, are used to the iPhone type of software-defined convergence; they’re looking for a similar elegance and simplicity in their datacenter environment. Nutanix provides a way for Sirius to get in front of the demand with a converged solution that mirrors what the cloud providers have adopted during the past decade.”

Dowling says that one of the big attractions of infrastructure-based cloud computing is that it provides a way for CFOs to mitigate uncertainty by paying for resources only as consumed. But, of course, this flexibility comes at a cost as well as with a certain loss of control. Dowling says that Sirius commonly receives requests to help organizations turn around and “in-source” their public cloud or otherwise outsourced environments.

“The huge advantage Nutanix brings is that companies can start their IT initiatives with a very small cost commitment,” said Dowling. “The scalability of Nutanix lets them expand their environments only as needed. This means that they, rather than the public cloud providers, benefit from continued enhancements resulting from Moore’s Law. Our customers retain control and pay only a fraction of the price they would if utilizing a public cloud provider.”

It’s not just giant U.S. partners that are having great results with Nutanix. BEarena is a solutions integrator in Sydney, Australia that focuses on all things virtual – they have always worked to keep their customers abreast of emerging technology and to give them an unbiased view of the latest solutions in the industry.

“Nutanix,” said Darren Ashley, president of BEarena, “has transformed our business 100%. In the last 12 months, we’ve gotten feedback from customers, analysts and even Nutanix competitors (who have been courting us), evidencing that BEarena is increasingly seen as being very innovative, forward-thinking and leading the charge in converged infrastructure deployments”.

Ashley says that BEarena staff is very technical. They don’t focus on products, but rather on solutions. Once they discovered and understood the Nutanix solution – they refocused their business around it. Half of their technical staff now holds NPP (Nutanix Platform Professional) certifications, while the other half are NPSE (Nutanix Platform Sales Engineer) certified.

“We make the pitch to our clients about the attributes of a modern datacenter”, said Ashley. “These include software-defined performance, flash designed from the ground up, elastic consumption, multi-hypervisor support and private/public cloud interoperability. We let them know that only Nutanix has all of these capabilities. Then the lights go on.”

Zycom Technology is a 16-year-old solutions integrator operating throughout Canada. Like many solutions providers, Zycom is in transition from a boutique integrator to a private cloud integration and service company with a vision. Zycom’s strategy is to become one of Canada’s leading integrators in private cloud technology. The firm has a particular emphasis in both VDI and in DaaS. In fact, they’ve built their entire DaaS platform around Nutanix.

“As good as our VDI practice was, relying on traditional servers and storage was an up-hill battle,” said Terry Buchanan, Zycom CTO. “Nutanix has really enabled VDI to take off as well as accelerated our sales funnel. We have never before seen this type of uptick. We have clients fighting over who is going to get to try out our Nutanix demo gear next.”

Buchanan says that one of the challenges that anyone in the channel who deals with servers and storage faces is that organizations tend to be very set in their ways, and are often resistant to disruptive products. But he says that RAID is an antiquated technology, and that IT professionals are surprisingly receptive to the Nutanix web-scale architecture. Even technology laggards perk right up when introduced to Nutanix.

“And they’re buying Nutanix not just for VDI,” said Buchanan. “Our clients are looking to use Nutanix for production environments, mission-critical apps and even for their entire infrastructures. We’re also getting traction in private cloud as well as with ISPs. Our clients are captivated by the up-front and long-term savings, operational performance, scalability and simplicity.”

Buchanan says that Nutanix recently enabled them to break into a new account which they had been targeting unsuccessfully for 5 or 6 years. Just presenting Nutanix opened the doors wide.

“Our internal nickname for Nutanix is ‘the Sales Enablement Department’,” said Buchanan. “We made Nutanix a strategic partner after just 3 months – we’ve never done that before with any new manufacturer. We hope to be Nutanix’s largest partner in Canada.”

Nutanix is hosting three partner summits across the globe in the next few months, and the theme is “Nutanix Now”. Unlike the leading datacenter incumbents, each of whom have tens of thousands of partners, Nutanix is looking to have a smaller, but more focused and effective partner channel.

It is rare when an opportunity comes along for forward-looking channel partners to build a business around a new datacenter technology. The time to transform their operations with Nutanix is clearly happening now.